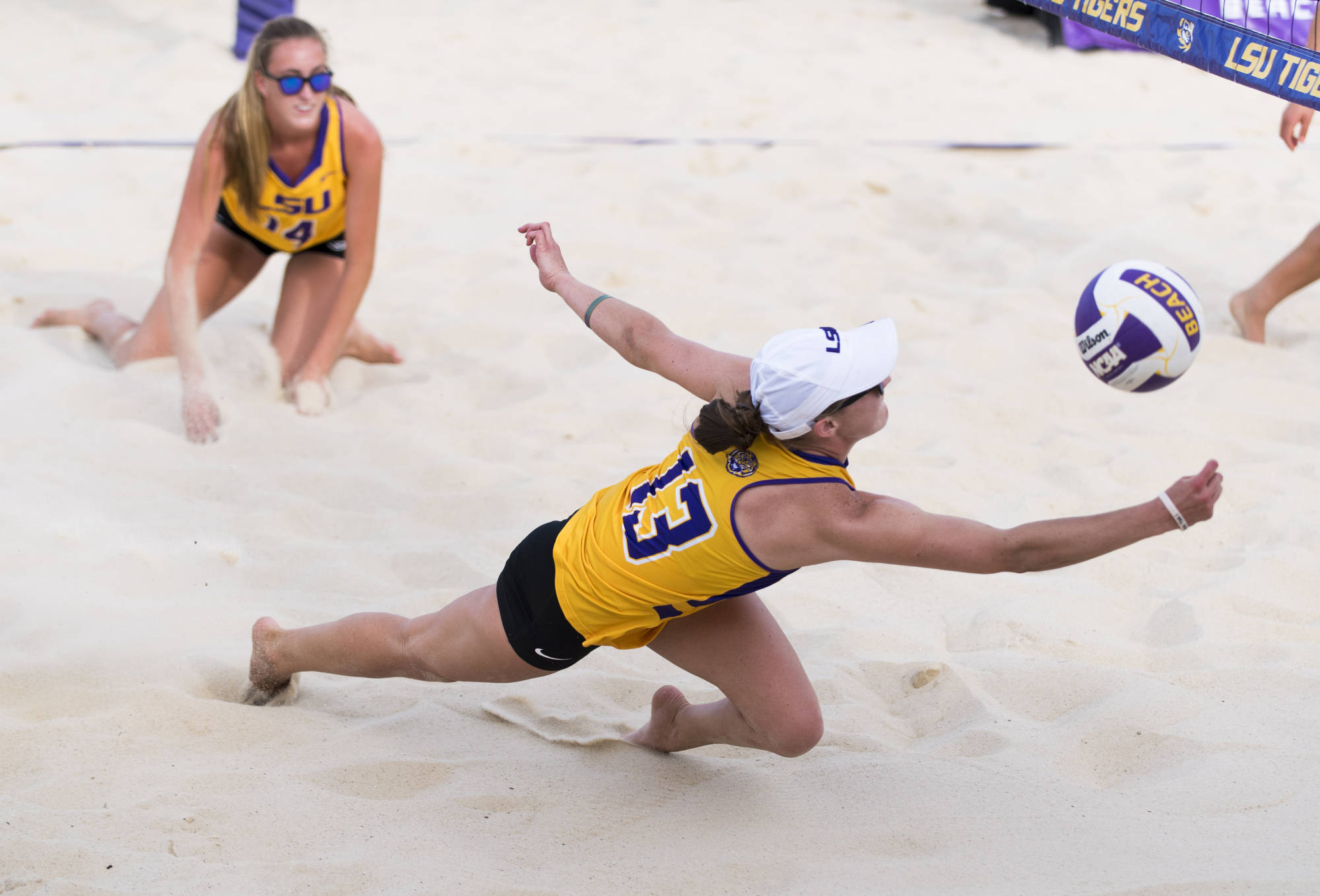 METAIRIE, LOUISIANA – After having its Sunday match against Houston Baptist cancelled due to weather from Saturday, the LSU beach volleyball team won its only match on Sunday against Central Arkansas in sweeping style.

“This ended up being a really crazy weekend,” said coach Russell Brock. Sometimes that chaos can disrupt the focus of a group, but I was really pleased by our response to all of the adjustments we had to work through. We are disappointed that we didn’t get to play all four matches but thankful the we got to play the matches we did and that as many programs got to compete in as many duals as possible. Tulane did a great job running the weekend.”

The Tiger’s match against Houston Baptist was cancelled because the weather on Saturday at the Green Wave Invitational forced some of those matches to be played on Sunday. Since LSU is scheduled to play Houston Baptist next weekend at the Battle on the Bayou, coach Brock and the Tigers agreed to cancel Sunday’s match with Houston Baptist.

“We play Houston Baptist next weekend, and some teams would have to miss travel plans if we did not cancel the match for tomorrow,” said coach Brock on Saturday evening. ” We agreed in order to help facilitate a more inclusive schedule for everyone, this weekend.”

That left the Tigers with only one match on Sunday which came against Central Arkansas. With all five courts playing at the same time, LSU jumped out to an early lead with sweeps on the first two courts. Claire Coppola and Kristen Nuss won in consecutive sets on Court 1, 21-18 and 21-14, the duo’s 22nd straight-set victory of the season. Haleigh Nelson and Ashley Allmer took Court 2 with a straight set victory as well, 21-16 and 21-18.

On Court 5, Riley Young and Maddie Ligon took set two, 21-17, to force a deciding set after falling 21-14 in the first set. In the third set, Young and Ligon clinched the match for the Tigers with a 15-9 victory.

Trailing 11-13 in the third set on Court 3, it seemed as though the Tigers may not get the sweep. Megan Davenport and Mandi Orellana took the first set, 21-18, before dropping the second set, 21-12. It took extra points, but in the end, Davenport and Orellana prevailed, 17-15, in the final set to give the Tigers a sweep over Central Arkansas.

“Today’s match was one that we knew would be a battle,” said Brock. “Probably the most challenging lineup matchup that we’ve had. I’m really proud of how our team went out and battled and took care of business. It was a great weekend.”

The Tigers will be back at home for that final time this season next weekend at the Battle on the Bayou. LSU has won its past 17 matches at Mango’s. The Tigers will play two matches on both Saturday and Sunday to finish the regular season.

“Now it’s time to get prepared for some great opponents next weekend for our last home event,” said Brock. “We are in a good place, but our focus is still on getting better. Looking forward to a good week of practice.”