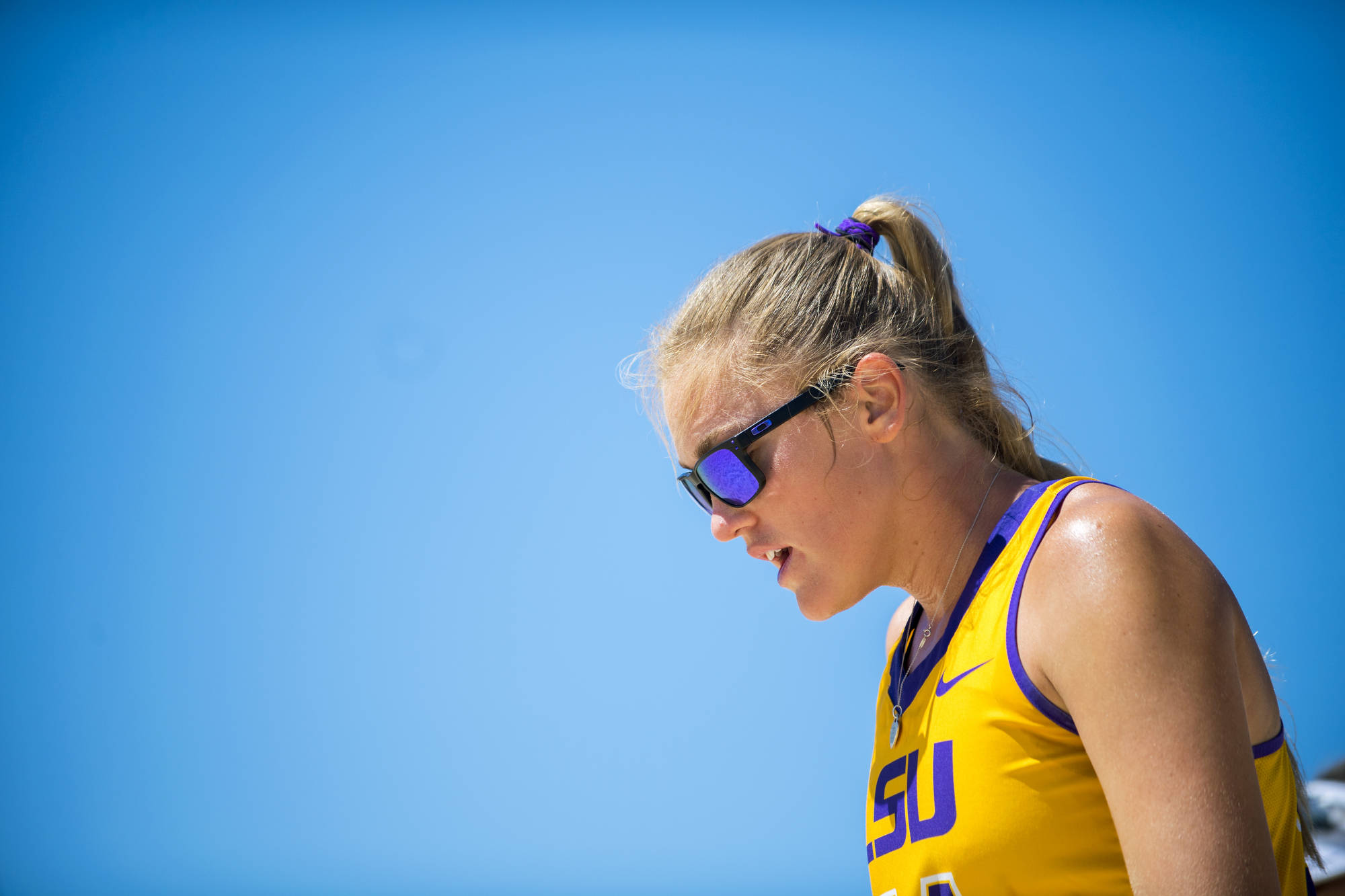 METAIRIE, LOUISIANA – Having to deal with weather delays throughout the day, the LSU beach volleyball team defeated No. 19 Tulane and No. 12 Grand Canyon on Saturday at the Green Wave Invitational, extending its winning streak to 11 and remaining undefeated in the state of Louisiana.

The Tigers improved to 18-9 on the season.

“Today was really challenging,” said coach Russell Brock. “We’ve been facing crazy conditions all year and I really think it helped us play well enough to get two really tough wins today. Our mentality was really strong and I’m proud of how our team battled and pulled for each other the whole time. It was a fantastic team day.”

The first match of the day was delayed by about an hour, but it was worth the wait, coming down to the final set on the final court, with LSU and Tulane tied at two. To begin, Tulane defeated the LSU pair of Emmy Allen and Megan Davenport on Court 4, 21-18 in consecutive sets. After dropping the first set on Court 5, 21-14, Riley Young and Maddie Ligon came back to clinch the court for the Tigers. The LSU duo took set two, 21-11, and set three, 15-13, to even the overall match.

The first set on Court 3 was tight all throughout, but Olivia Powers and Hunter Domanski prevailed, winning it, 26-24. The LSU pair evned the overall match with a 21-16 victory in set two. Haleigh Nelson and Mandi Orellana took the first set, 21-17, before dropping the second set, 21-16, leaving the match to be decided in the third set on Court 2.

The third set was tied at seven and then again at 12. Ultimately, Nelson and Orellana prevailed, giving the Tigers their sixth consecutive victory against Tulane and extending its current win-streak to 10 matches.

In its second match of the day against Grand Canyon, LSU took Court 5 when Young and Ligon won in straight sets, 21-10 and 21-16. Allen in Davenport won in straight sets too on Court 4, 21-18 and 22-20. Before any other courts could begin play, lightning struck, delaying the match by approximately 30 minutes.

When the match was resumed, LSU made quick work on Court 1 to clinch the match for the Tigers. Coppola and Nuss won in consecutive sets for the 21st time this season, 21-18 and 21-5. Not long after taking Court 1, LSU took Court 3 with Powers and Domanski earning a straight set win, 24-22 and 21-18.

LSU is riding an 11-match win streak and improved to 11-0 in the state of Louisiana, this season.

On Sunday, LSU will start early as it will take on Central Arkansas (7-2) at 11 a.m CT. The Tigers’ match with Houston Baptist is cancelled in order to fit in matches missed on Saturday. LSU and Houston Baptist will face each other next weeken at the Battle on the Bayou, hosted by LSU.

“Tomorrow is going to be another tough day and our job is to get rested and ready to play well again,” said Brock.