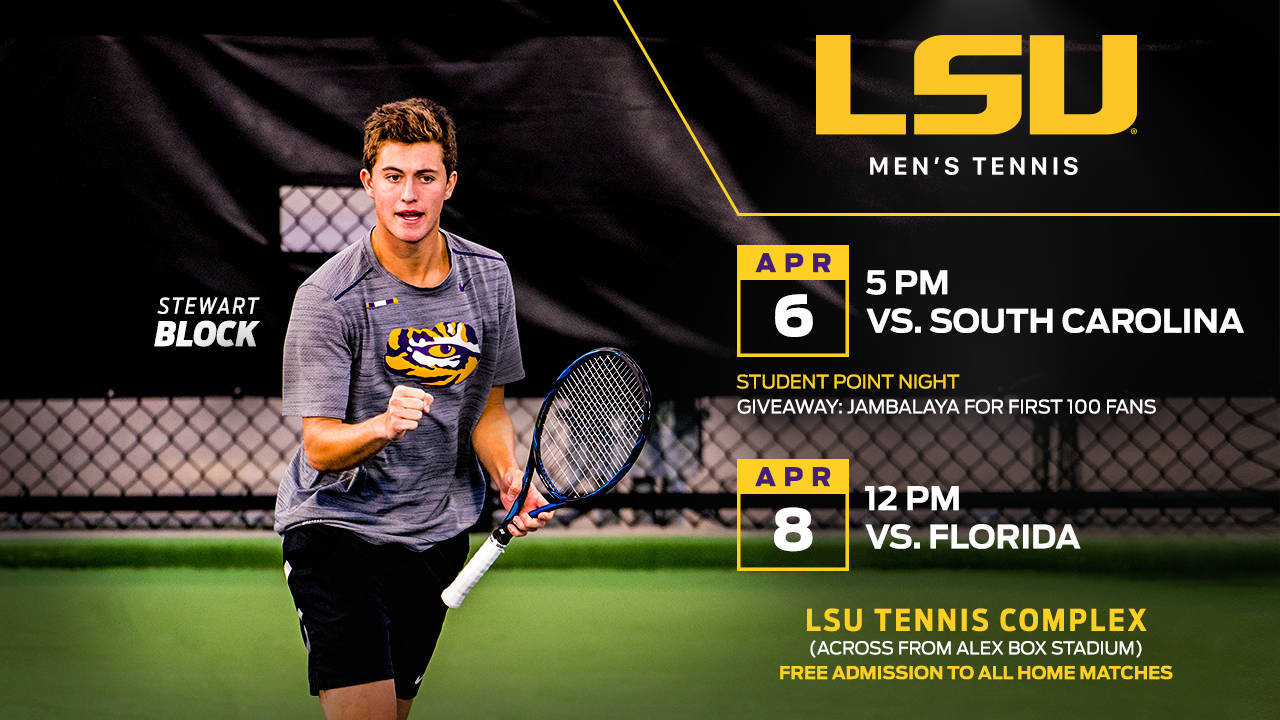 BATON ROUGE – The LSU men’s tennis team will continue its home stand with a match against No. 9 Florida at noon CT Sunday in the LSU Tennis Complex.

Admission to all home matches is free. The LSU Tennis Complex is located across the street from Alex Box Stadium, Skip Bertman Field on Gourrier Avenue.

Thoughts from Co-Head Coach Chris Brandi
“We need to carry over the level and energy from the end of our last match into Sunday,” co-head coach Chris Brandi said. “Florida is one of the most talented teams in the country and has a lot of ranked players. We have a great opportunity to play one of the nation’s best teams at home.”

The Matchup
Florida holds the all-time advantage in the matchup with LSU, 31-28-1. Last season, LSU dropped a very close 4-3 match in Gainesville after the Tigers took the top three courts in singles action.

Stewart Block and Shane Monroe each picked up singles wins last time out when the Tigers dropped its last match, 5-2, to No. 27 South Carolina. The win was Monroe’s second over a ranked opponent on court one as he defeated No. 24 Gabriel Friedrich, and it was Block’s first conference win of his career.

Rafael Wagner has eight wins in the dual season and 15 overall wins. The sophomore also has three wins in conference play.

Wagner and Agie Moreno have recently moved to the No. 1 doubles court and earned a win against the No. 10 pair in the nation. The duo currently sits at No. 82 in the latest ITA doubles rankings. Monroe and Block lead the doubles teams with nine wins on court three.

There are four Gators listed in the ITA singles rankings: No. 9 Alfredo Perez, No. 16 Johannes Ingildsen, No. 31 Oliver Crawford and No. 94 Duarte Vale. Florida also has four doubles teams in the rankings in No. 5 Ingildsen and Perez, No. 12 Chase Perez-Blanco and Crawford, No. 39 Andy Andrade and Perez-Blanco, No. 44 Vale and McClain Kessler and No. 77 Perez and Vale.

Crawford has a 9-1 record in conference play and has yet to drop a match on court three this season. He has a team-best 14 wins. There are Ingildsen and Perez-Blanco each have 11 wins on the season.

The Gators have not won a doubles point in two matches.