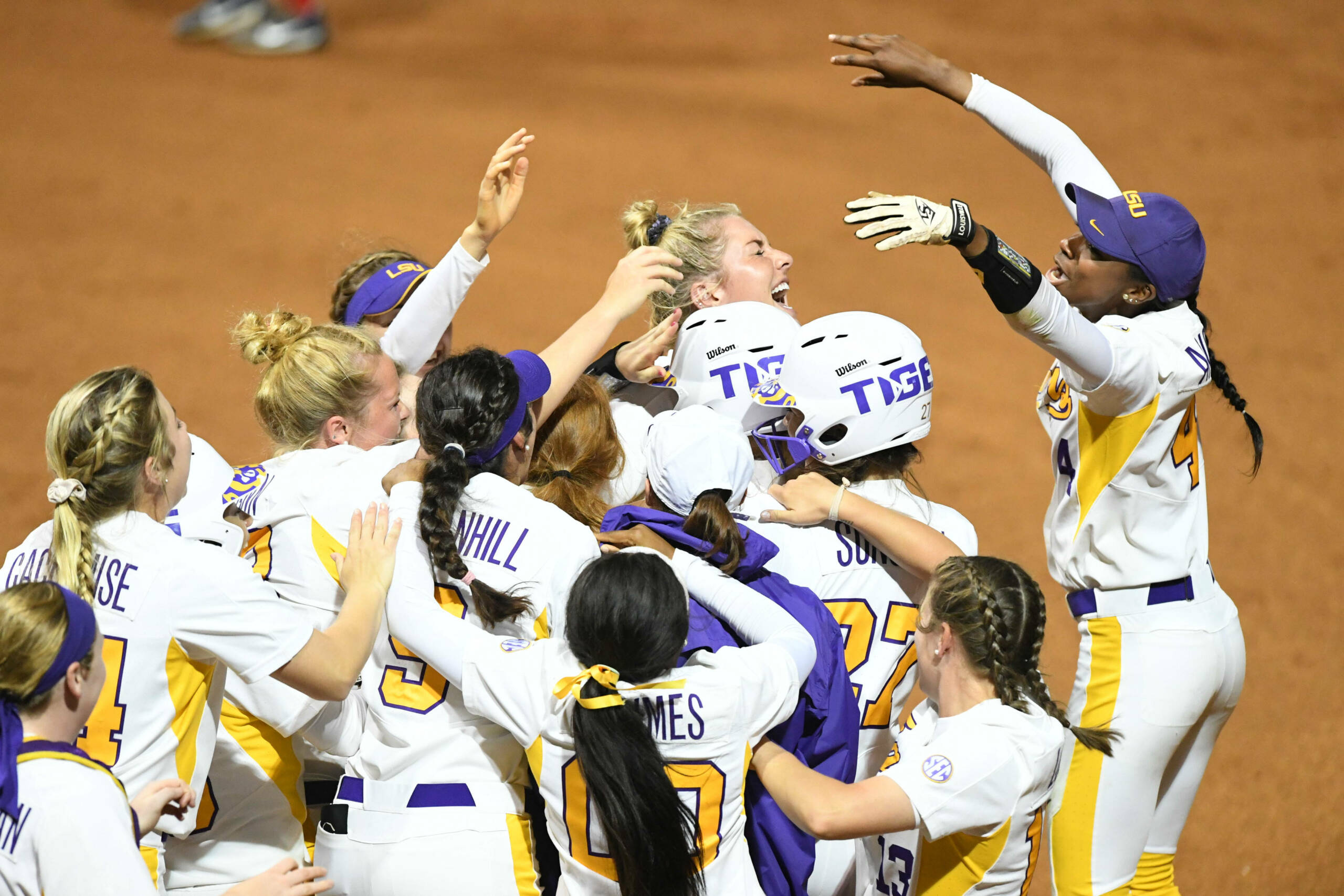 BATON ROUGE – In the most innings in a game in program history, the 14th-ranked LSU softball team claimed a 2-1 victory over the Ole Miss Rebels in 19 innings, Friday night in Tiger Park. The game also tied an SEC record for most innings played in a game in the conference.

The Ole Miss Rebels got on the board first after a throwing error gave them a 1-0 lead in the top of the first inning. That is all they would get as senior Allie Walljasper was sensational in the circle.

Walljasper pitched her 10th complete-game of the season and did not allow an earned run through 19 innings. She struck out nine in her 11th win on the season.

The Tigers put their first runs on the board after Taryn Antoine drove in Michaela Schlattman with a single into right field, tying the game up at one apiece.

Antoine would lead the bottom of the 19th inning off with a single up the middle, which was the first hit for the Tigers since the 10th inning, and would later advance to second base on a fielder’s choice.

Then with two outs, sophomore Amanda Doyle hit a blooper in shallow left field to score Antoine and give the Tigers a 2-1 win against Ole Miss. It was Doyle’s fourth walk-off hit of the season and the Tigers eighth walk-off win of the year.

Both defenses made phenomenal plays on the night. Ole Miss had chances with runners in scoring position, but a 5-4-2 double play by the Tigers and a diving catch by Aliyah Andrews helped the Tigers get out of those jams.

Opening Statement…
“A heroic performance by Allie Walljasper. I can’t even imagine, no earned runs in 19 innings. That is one we are going to be talking about for years and years and years from now. Both pitchers were phenomenal, what competitors. This was just fun to be a softball fan tonight. “

On the competitiveness of the game…
“It really was competitive. It was like one would match the other with great defensive plays. The moment where they tried to squeeze, and we turned the double play was just an amazing moment. I don’t think I’ve yelled that loud all season long, so it was a lot of fun watching us play defense and watching us compete.”

On wanting to win the game…
“Yea I mean you think about how hard you work for that moment you definitely want to make sure you come away with a win there. You also want to defend Tiger Park and our record here, and all of those things. Both teams were so deserving tonight, it’s tough.”

>> Doyle had an LSU record of 26 putouts in the game. The previous record was held by Lauren Houston who had 23 on March 8, 2013 against Mississippi State.

>> Becca Schulte had a career-high and an LSU record of 10 assists, breaking the old record of eight. Shemiah Sanchez had nine assists on the night as well, which goes down as second-best in program history.

>> LSU bested the record for most team at-bats with 61 on the night, beating the old record of 48 which happened on four separate occasions.

>> As a team, LSU had 27 assists, breaking the previous LSU softball record of 19 which happened on two separate occasions.

>> Andrews and Doyle both finished with eight at-bats which is a new LSU record. Elyse Thornhill, Emily Griggs and Amber Serrett finished with seven at-bats in a game earlier in the year against Auburn.

>> LSU had eight hits on the night. Antoine led the team with two, while Andrews, Doyle, Sanchez, Schlattman, Serrett, and Thornhill each had one.

The Tigers will return to action for game two of the three-game series versus Ole Miss on Saturday, April 7th at 6 p.m. CT. The game will be broadcast online on the SEC Network+