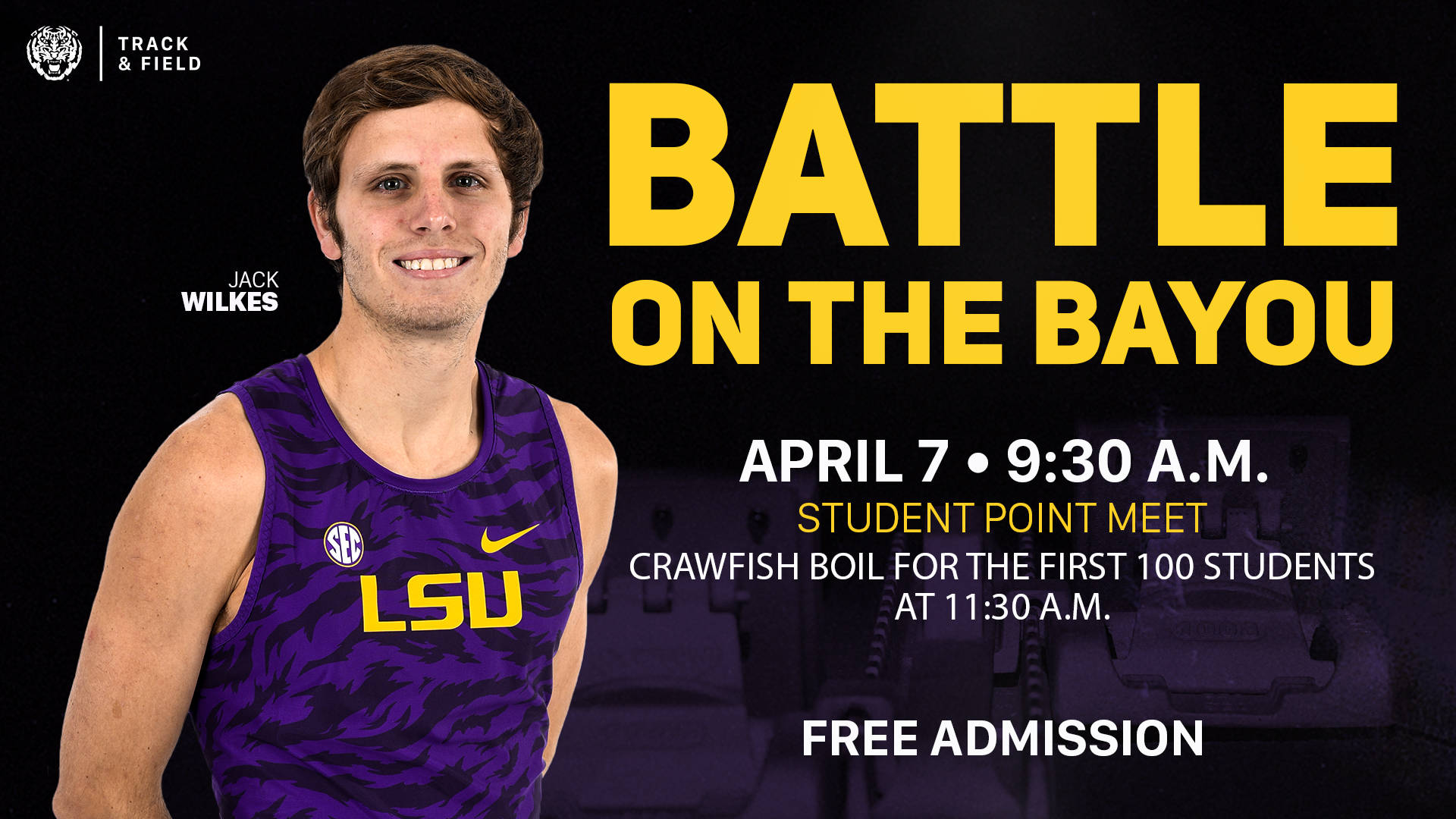 BATON ROUGE, La. – The LSU women’s and men’s track and field teams will welcome three Big Ten opponents to the Bernie Moore Track Stadium on Saturday for the eighth-annual Battle on the Bayou.

The quadrangular meet featuring LSU, Purdue, Iowa and Penn State will be scored as a dual meet between each of the teams. Individual events will be scored using a 5-3-2-1 format with the top two finishers from each team factoring into the scoring. The relay will be scored with a 5-3 format only counting the top relay from each squad.

The meet will begin with the women’s discus throw Saturday at 9:30 a.m. Events on the track will get started with the women’s 10,000 meter run at 9:45 a.m. A full schedule of the events can be found here.

Results for the Battle on the Bayou will be available at results.deltatiming.com/lsu. Fans are also encouraged to follow LSU track and field on Twitter at @LSUtrackfield for live updates from the meet. Saturday will be a Student Point meet for LSU students and the first 100 students to show up will have access to a free Crawfish Boil that starts at 11:30 a.m. DJ CMIX will be on the turn tables providing live tunes during the meet.

In latest U.S. Track & Field and Cross Country Coaches Association (USTFCCCA) poll that was released April 2, the LSU women are ranked No. 5 and the men sit in the 10th spot. The women moved up four spots from their preseason ranking of No. 9, while the men catapulted 16 spots to move into the top 10.

The Purdue women’s team enters the Battle on the Bayou ranked No. 11, and the Penn State men are the 17th-ranked team in the NCAA. Iowa’s men’s team is ranked just outside of the Top 25 in the 26th slot. The Penn State women (No. 33) and Iowa women (No. 35) are ranked in the mid-30s.

LSU’s 100-meter dash trio of Aleia Hobbs, Kortnei Johnson and Mikiah Brisco have been absolutely phenomenal in 2018. Hobbs (10.86), Johnson (10.97) and Brisco (10.99) have all cracked the 11-second barrier this season and those marks rank first, second and fifth in the NCAA nationally. Those three plus Cassondra Hall are the main reason LSU’s 4×100 meter relay has the top four times in the world right now with a season best of 42.65. LSU’s men’s 4×100 meter relay foursome of Kary Vincent Jr., Renard Howell, Correion Mosby and Jaron Flournoy own the No. 1 readout in the NCAA and No. 2 mark in the world with a season-best of 38.84.

LSU has two hurdlers, Kymber Payne and Damion Thomas, who own the best times in the NCAA this year; they both clocked their season bests at last weekend’s Texas Relays. Payne registered a time of 55.92 the 400 meter hurdle finals to claim gold, and Thomas clocked a 110 meter hurdle time of 13.43w to win his event. Thomas was named the SEC Freshman of the Week for his performance. Fellow hurdler Tonea Marshall owns the second-fastest time in the NCAA in the women’s 100 meter hurdles with a season best of 12.73w.