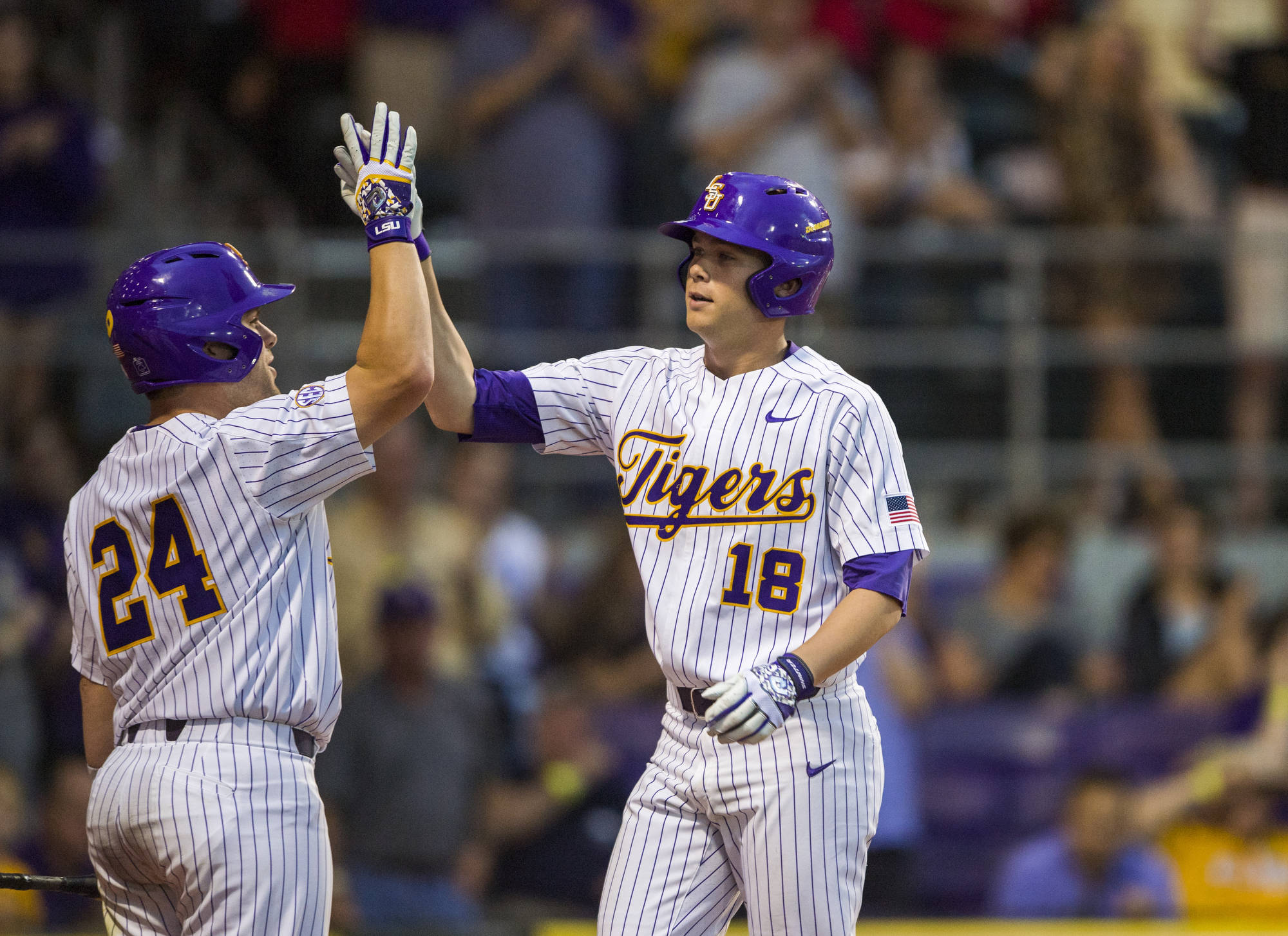 TV/ONLINE
• Thursday and Friday games will be televised on the SEC Network
• All three games may be viewed on SEC Network +, accessible at WatchESPN.com and the Watch ESPN app

SERIES RECORD
• Texas A&M leads the series, 22-20-1, and the first meeting between the teams occurred in 1907 in Baton Rouge (a 3-2 LSU win). LSU has won 14 of the last 22 meetings with Texas A&M, though the Aggies posted a 2-1 series victory last season in Baton Rouge. The Aggies have an 8-7 lead in the15 games played between the schools since Texas A&M began playing baseball in the SEC in 2013. Eight of the 15 games have been decided by one run.

• The teams’ first meeting in which Texas A&M played as a member of the SEC occurred in 2013, when LSU won two of three games in College Station. The Tigers also played in College Station in 2014 and in 2016, when the Aggies posted 2-1 series victories, so LSU is 4-5 in the Aggies’ home ball park since Texas A&M joined the SEC.

• Prior to 2013, the most recent meeting between the teams came in the 2004 NCAA Super Regional in Baton Rouge, as LSU swept two games to advance to the College World Series. One of LSU’s most famous matchups with Texas A&M came 29 years ago in May, 1989, when the Tigers defeated the top-ranked Aggies twice on the final day of the NCAA Central Regional in College Station to advance to the College World Series.

QUOTING PAUL MAINIERI
“We have been very evenly matched in the past five seasons with Texas A&M since they joined the SEC. I expect nothing less than just great baseball games this weekend, and we’re hoping to find a way to win close games. This weekend provides a great opportunity for our players, and hopefully we can get the job done.”

ABOUT THE TIGERS
• The Tigers are No. 17 in this week’s Baseball America poll, marking the 122nd consecutive week the Tigers have appeared in a Top 25 poll … LSU has been ranked every week since the beginning of the 2012 season.
• LSU is 5-4 in the SEC after last weekend’s series win over Mississippi State, and the Tigers are only one game out of first place in the Western Division behind Ole Miss.
• LSU is No. 3 in the SEC in team batting average (.299), and the Tiger hitters have the second-fewest number of strikeouts in the league (172).
• LSU senior second baseman Austin Bain is hitting .400 (8-for-20) in the Tigers’ last five games with one homer, five RBI and four runs … junior rightfielder Antoine Duplantis is batting .381 (8-for-21) in the last five games with one double, one triple, three RBI and one run.
• LSU junior centerfielder Zach Watson has homered three times in the Tigers’ last four games … senior leftfielder/DH Beau Jordan enters the Texas A&M series having reached base in 15 consecutive games.
• The LSU bullpen enters the Texas A&M series with a streak of 29.1 consecutive scoreless innings – the bullpen was last charged with a run on March 21 vs. Tulane.
• The LSU pitching staff was very effective in the Tigers’ series win last weekend versus Mississippi State, limiting the Bulldogs to a .172 (17-for-99) batting average and allowing just three earned runs in 27 innings for a 1.00 ERA in the three-game set.
• Sophomore right-hander Zack Hess, LSU’s Game 1 starter at Texas A&M, defeated Mississippi State last week, working 6.2 innings and limiting the Bulldogs to one run on three hits with four walks and 10 strikeouts … Hess is now No. 3 in the SEC with 55 strikeouts on the year.
• LSU right-hander Ma’Khail Hilliard was named SEC Co-Freshman of the Week on Monday after delivering a brilliant outing last Saturday versus Mississippi State, firing six shutout innings and allowing just three hits with two walks and a career-high nine strikeouts …. Hilliard improved his record to 6-1 and lowered his ERA to 0.76, the best mark in the SEC … he is also tied for the league lead in wins, and he is No. 4 in the conference in opponent batting average (.184).
• Sophomore left-hander Nick Bush worked three shutout innings over two appearances in the Mississippi State series last weekend, and he picked up his first career save on Saturday by blanking the Bulldogs over the final two innings with one strikeout.

ABOUT THE AGGIES
• Texas A&M is No. 8 in the SEC in batting average, hitting .288 as a team this season with 56 doubles, 12 triples, 27 homers and 19 steals in 22 attempts. The Aggies pitching staff is No. 1 in the SEC with a 2.83 ERA, and Texas A&M pitchers have limited opponents to a .226 batting average with 255 strikeouts in 267 innings.
• Texas A&M’s leading hitter is junior infielder Michael Helman, who is batting .400 with 10 doubles, one triple, three homers and 22 RBI. Helman is No. 2 in the SEC in batting average, and leads the league in base hits with 48.
• Sophomore infielder Braden Shewmake is hitting .322 with four doubles, three triples, three homers and 29 RBI, and sophomore outfielder Logan Foster is batting .312 with seven doubles, one triple, six homers and 30 RBI.
• Junior right-hander Mitchell Kilkenny, the Aggies’ Game 3 starter, is No. 2 in the SEC in ERA (1.59), trailing only LSU’s Ma’Khail Hilliard (0.76). Sophomore left-hander John Doxakis, Texas A&M’s Game 2 starter, is No. 5 in the league in ERA (2.03).