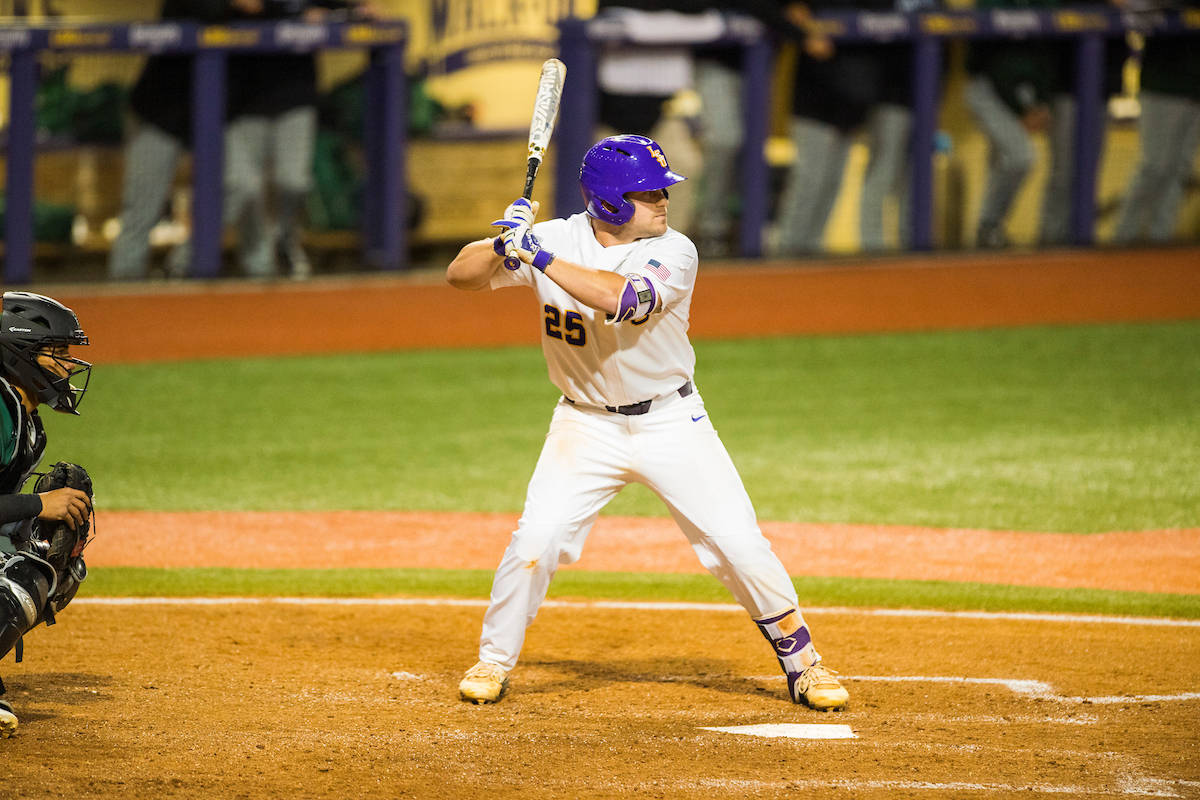 The LSU offense exploded for 15 runs, and Bryce Jordan was one of four Tigers with multiple hits in the game. Two of his hits were doubles, marking the first time that the junior had ripped two doubles in a game. He also had one RBI and scored one run in the contest.

Next up, LSU will travel to Texas A&M for a three-game series beginning at 7 p.m. CT Thursday in College Station. Game 2 will start at 6 p.m. CT Friday, and Game 3 begins at 2 p.m. CT Saturday. The first two games will be televised by the SEC Network, and Game 3 may be viewed online on SEC
Network +, accessible at WatchESPN.com and the Watch ESPN app.

Fans can also tune in on throughout the weekend on the LSU Sports Radio Network, including flagship channel WDGL 98.1 FM in Baton Rouge.

Freshman AJ Labas fired five innings Tuesday night to improve to 3-1 on the season. The right-hander limited the Colonels to one run on five hits, walked one and struck out two.

“It was a real solid victory,” said LSU coach Paul Mainieri. “It wasn’t perfect, there were a couple of mistakes that we made, but overall, I’ve got to be pleased. I thought we had some real good at-bats and put some runs on the board, and our bullpen, like it’s been for a long time now, was terrific. It all added up to good win and allows us to turn the page to get ready for a big series at Texas A&M.”

The Tiger bullpen continued to be impressive and has not allowed a run since the midweek contest against Tulane on March 21. Matthew Beck, Todd Peterson, Cam Sanders and Bain each pitched an inning against Tulane. The combination was imposing, striking out seven and restricting Nicholls to two hits.

The loss was charged to Nicholls starter Bryan Taylor, who falls to 2-4 on the season. The southpaw gave up three runs on five hits and walked one in 2.1 innings of work.

The Tigers were first on the board and took the 1-0 lead in the bottom of the second when Bryce Jordan ripped a single to left field with runners on first and second. Designated hitter Beau Jordan scored on the RBI single and reached earlier in the inning after being hit by a pitch.

Centerfielder Zach Watson and Bain each sent solo bombs over the left field fence to lead off the bottom of the fourth inning. After a fly out and a ground out, left fielder Daniel Cabrera sent a screaming double to left-center field and scored on Feduccia’s second hit of the night to give LSU the 4-0 advantage.

The Colonels narrowed the lead to 4-1 in the top of the fifth inning. Joey Morales was hit by a pitch to open the inning and then scored from third on a double play ball.

After Beau Jordan reached on a fielding error in the bottom of the fifth inning, the tarp was pulled and play was delayed for 43 minutes. Upon resuming play, Cabrera walked, and Bryce Jordan legged out a drag bunt to third base to load the bases. A sacrifice fly by Feduccia to deep right field plated Beau Jordan. Third baseman Jake Slaughter followed by screeching a single down the middle to score Cabrera. Shortstop Hal Hughes was hit by a pitch to load the bases, and with two outs, Bain drew a bases loaded walk to bring home Bryce Jordan, which gave LSU the 7-1 edge.

With two outs in the bottom of the seventh, Watson was hit by a pitch and Bain slapped a base hit through the left side to put runners on the corners for Duplantis. The outfielder dropped the two-run double into right field, and LSU nabbed the 9-1 lead.

With pinch hitter Nick Webre and Bryce Jordan in scoring position after a base hit and a double, pinch hitter Nick Coomes grounded out to second base, plating another Tiger run and finalizing the score at 10-1.