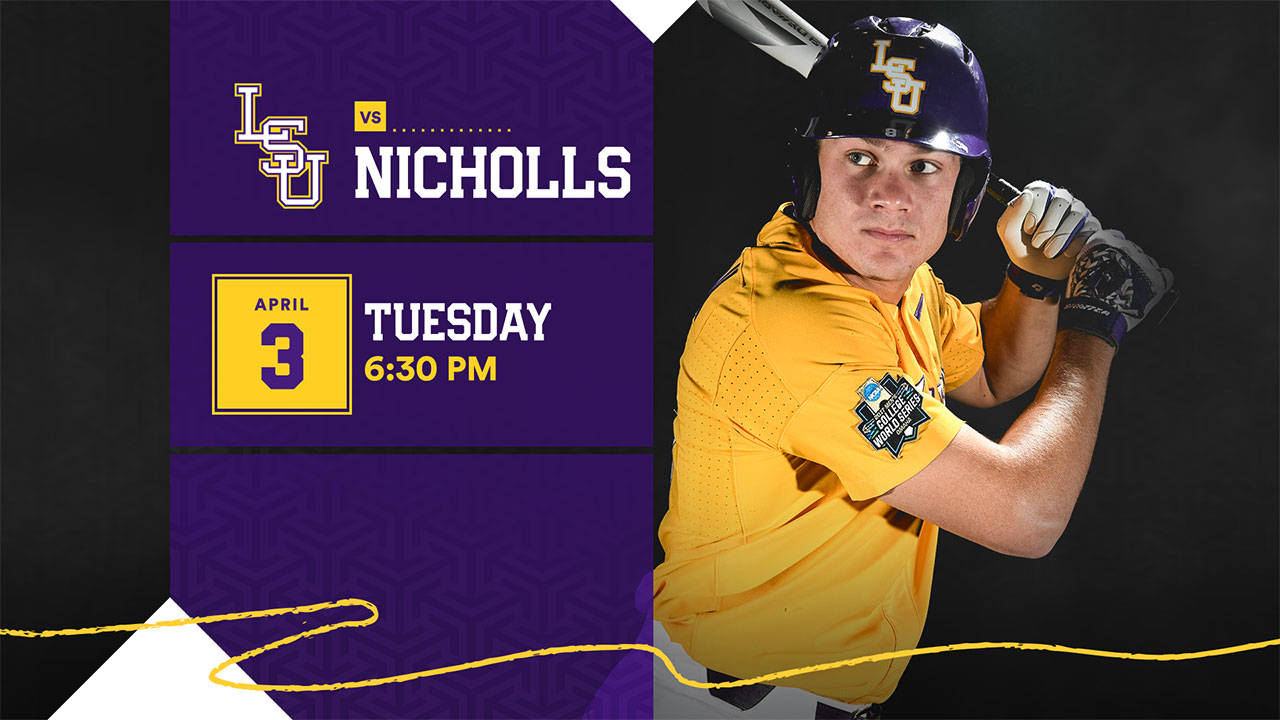 RANKINGS
LSU – No.17 by Baseball America; No. 20 by USA Today
Nicholls – unranked

SERIES RECORD
LSU leads the all-time series with Nicholls, 53-23, including a 3-2 win for the Tigers over the Colonels last season in Baton Rouge. The Tigers have won 26 of the last 28 meetings with the Colonels. Nicholls’ only wins in its last 28 games versus LSU were a 6-3 victory on February 18, 2015, and a 3-1 win over the Tigers on April 15, 2009 – both of those Colonels wins occurred in Alex Box Stadium, Skip Bertman Field.

QUOTING PAUL MAINIERI
“I like the way our pitching is coming together; we just need to get healthy with our position players and become a little better offensively. We’ve also got to tighten it up on defense with some of our fundamentals. We’ve passed the midway point now of the regular season, and this is the time that we’re supposed to start getting better. We’ve won 18 games without a completely healthy team, and we’re only one game out of first place in the SEC West. We’re going to keep battling, and I feel we’ll start making a significant move in a positive direction.”

ABOUT THE TIGERS
• The Tigers are No. 17 in this week’s Baseball America poll, marking the 122nd consecutive week the Tigers have appeared in a Top 25 poll … LSU has been ranked every week since the beginning of the 2012 season.
• LSU is 5-4 in the SEC after last weekend’s series win over Mississippi State, and the Tigers are only one game out of first place in the Western Division behind Ole Miss.
• The LSU pitching staff was very effective in the Tigers’ series win versus Mississippi State, limiting the Bulldogs to a .172 (17-for-99) batting average and allowing just three earned runs in 27 innings for a 1.00 ERA in the three-game set.
• Senior leftfielder Beau Jordan hit .375 (3-for-8) in the Mississippi State series with one homer, two RBI and two runs, while freshman outfielder/DH Daniel Cabrera batted .364 (4-for-11) with one double, one homer and four RBI … sophomore centerfielder Zach Watson hit two homers in the Mississippi State series, and he batted .333 (4-for-12) with two homers, three RBI and four runs.
• LSU’s bullpen combined to throw 12.2 shutout innings in four games last week … the Tiger relievers allowed just five hits in 12.2 innings with four walks and 13 strikeouts.
• Sophomore left-hander Nick Bush worked three shutout innings over two appearances in the Mississippi State series, and he picked up his first career save on Saturday by blanking the Bulldogs over the final two innings with one strikeout.

ABOUT THE COLONELS
• Nicholls is hitting .262 as a team this season with 46 doubles, six triples, 11 homers and 14 steals in 31 attempts. The Colonels pitching staff has a 5.30 ERA and a .294 opponent batting average with 151 strikeouts in 237.2 innings.
• Nicholls’ leading hitter is junior infielder Brady Bell, who is batting .347 with seven doubles, nine RBI and nine runs. Senior outfielder Chet Niehaus is hitting .303 with a team-best three homers, and senior outfielder Lee Clark leads the Colonels with 21 RBI.