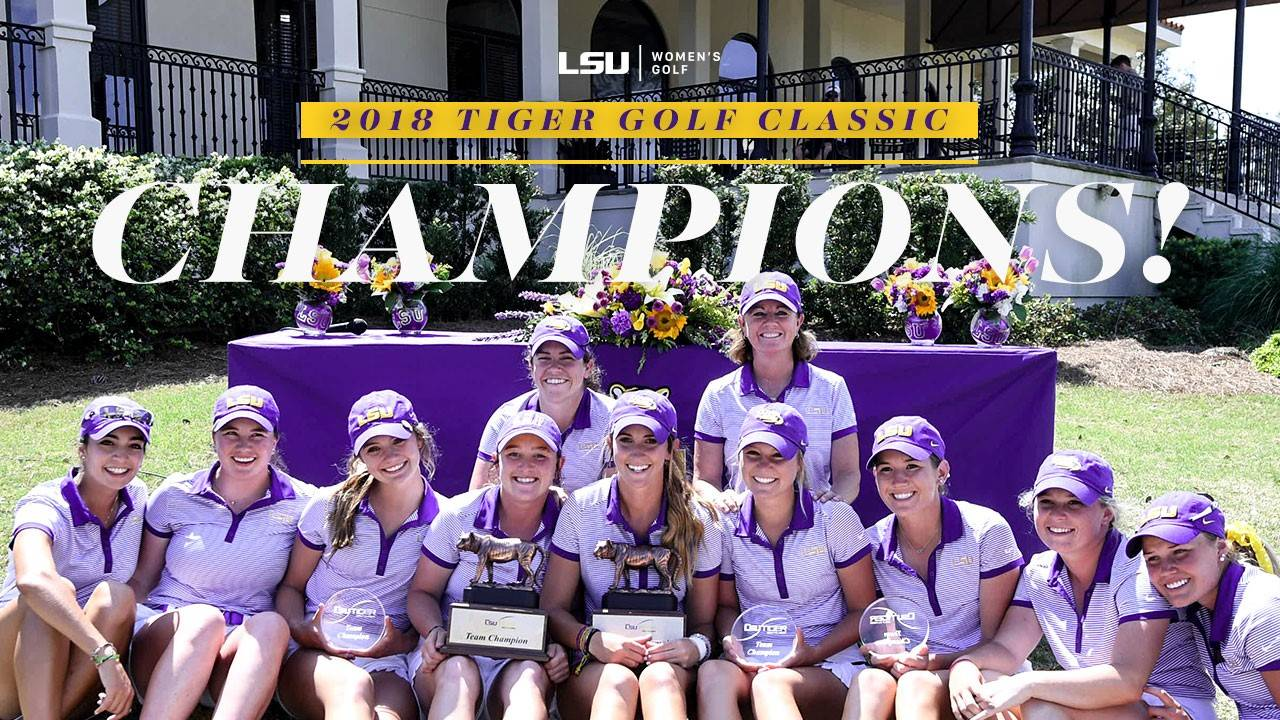 BATON ROUGE – Senior Claudia De Antonio continued her streak of red-hot golf winning her first collegiate tournament at the 2018 LSU Tiger Golf Classic at University Club by five shots. The Lady Tigers stormed back from an 11-shot deficit after two rounds to capture its first team title since 2015 over Houston by two shots.

The Lady Tigers were the low team today at +1 and had a three-day total of 902.

De Antonio played the front nine flawlessly with birdies at three, four, and five and made zero bogies. She played the back nine at even par to finish the day with a 3-under par 69 and a total of 215, being the only player in the tournament to keep it in red figures. Houston’s Leonie Harm finished five shots back of De Antonio at +4 for the tournament 220.

“(LSU) came out really determined. We came in 11-shots back going into to this last round and we were really excited that the wind finally calmed down so we could attack the golf course,” said LSU head coach Karen Bahnsen.

“I’m so proud of the way dug through this, because sometimes when you’re playing your home course things can be more difficult because there are some (demons) out there, old memories, but they didn’t let that bother them. They went out there with a mission and they accomplished it so I’m really proud of them.”

“The way my two seniors have stepped up this year is huge for this team. They’re showing leadership not only by mouth, but by their actions and that’s the biggest thing that makes an impact on all of the young players we have.”

“Claudia’s (De Anotnio) win was huge for her. First of all I’m so excited that her family was here to get to see her win, because they don’t get to see very many tournaments. The way she handled herself being in the hunt was great, because she’s been in the hunt before. She asked me to stay around her if she needed me, but she didn’t really need me, she had it under control. She handled her emotions and that’s what it takes to win.”

Senior Sydney Cavin had a great day for the Lady Tigers firing a 3-under 69. Cavin finished in a tie for 10th with a three-day total of 226. De Antonio and Cavin’s rounds of 69 tied for the tenth lowest at the University Club in women’s collegiate play.

Aoife O’Donovan and Monica Dibildox were the leading individuals for the Lady Tigers at +24 246.

Up next for LSU is the Brickyard Collegiate in Macon, Georgia on April 9-10. It will be the final tune-up for the Lady Tigers before the 2018 SEC Championships in Birmingham, Alabama, April 18-22.