Basketball Comes Up Short at South Carolina in OT 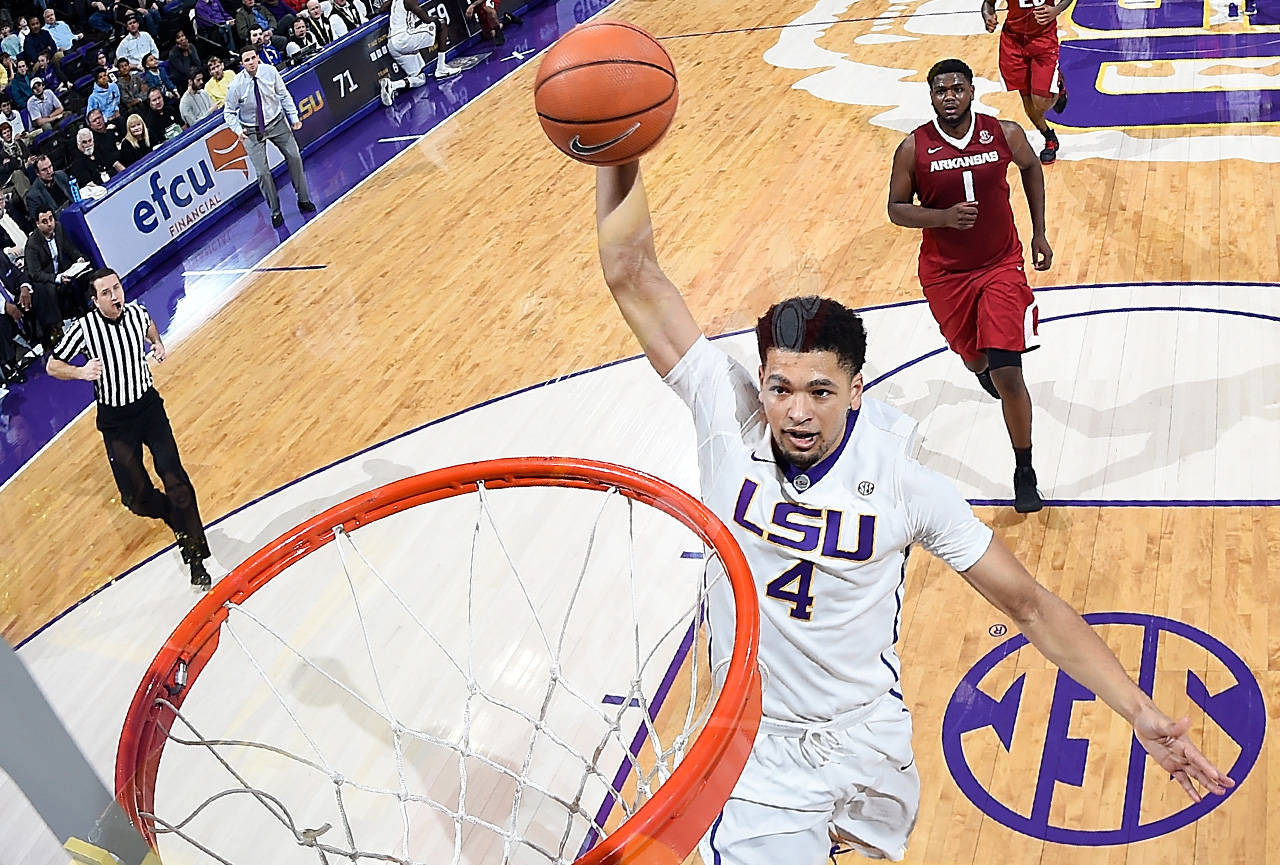 COLUMBIA, S. C. – LSU freshman guard Tremont Waters forced overtime with another of his long-distance three-pointers in the final 3.7 seconds of regulation, but the Tigers could muster only two more points in the extra session, falling to South Carolina, 83-74, Wednesday night at the Colonial Life Center.

The Tigers had rallied from 15 points down to force the extra session and looked like they had the momentum to end a six-game road losing streak, but Carolina got the first five points of the extra session on a three by Hassani Gravett and a bucket by Maik Kotsar to go up 77-72 while LSU was missing two field goal attempts and two free throws in the same opening 1:49 of overtime.

The Gamecocks would score the first nine in overtime before Brandon Sampson had a tip-in of a Duop Reath missed three to make it 81-74 with just 45 seconds to go.

LSU falls to 16-13 and 7-10 in the SEC, while Carolina rises to 16-14 and 7-10. Carolina would have any two-team tiebreakers over LSU in seedings for next week’s SEC Tournament in St. Louis. LSU may find itself in a must-win situation Saturday against Mississippi State (Noon tip at the Maravich Center, 11:40 a.m. for Senior Tribute) to avoid having to play on the first day of competition on Wednesday. Carolina concludes with a game at Auburn.

Waters would miss his fourth-consecutive 20-point scoring game, finishing with 19 points on 6-of-15 shooting, including 2-of-6 treys and 5-of-5 at the free throw line to go with three rebounds and four assists. Wayde Sims had 12 points, 2 rebounds and 2 assists, while Skylar Mays had 12 points, seven rebounds and six assists. Brandon Rachal off the LSU bench, had seven points but also 13 rebounds and three steals in 27 minutes.

For Carolina, Frank Booker was a terrible thorn in LSU’s side making 6-of-7 three pointers on an 8-of-10 shooting night (3-3 FTS) to finish with 25 points in 38 minutes. Wesley Myers had 23 points, a team-high seven boards, four assists and three steals.

Although South Carolina would lead for the majority of both halves, the Tigers closed each with a rush to tie the game.

In the first 20 minutes, South Carolina had gotten a second eight-point advantage, at 31-23, with 3:21 to go. Randy Onwuasor hit a three off a Waters pass and after a Gamecock miss, Waters was fouled and made two free throws to cut it to 31-28 with 2:33 before intermission. After some play, Aaron Epps was fouled with 1:53 left and he made two tosses to bring the Tigers to 31-30.

In the final 1:53, Carolina missed two three-pointers and had a turnovers while LSU missed a three but after a steal by Rachal, Reath was fouled and made one shot with 10 seconds left to tie the game heading to the dressing room at 31-31.

The teams traded buckets, threes and the lead coming out of the dressing rooms as Sims hit a layup and Mays and Reath treys, but Booker was on the other end hitting a couple and Felipe Haase’s trey with 16:25 gave the Gamecocks a 42-39 advantage with 16:25 to play in regulation.

But ever so slowly things began to turn back toward the Tigers. Mays hit a three and then a change in defense seem to stall the Gamecocks. Rachal, who assisted on the Mays trey, got a steal and a layup to cut the game to 62-52. Ironically, it was Mays who had the assist and then who got the steal and another assist with a pass to Rachal who put it up and in while drawing contact.

The Tigers went to the under eight media time out at the 7:12 mark down 62-54 and added one more point to make it 62-55 as Rachal completed the three-point play.

Again, the Tigers had the Gamecocks on their heels as Waters came up with the steal and Sims would get the ball back to Waters for the bucket to make it 62-57 with still 7:01 to play.

Booker got a Carolina layup to push the lead back to seven, but Sims had two consecutive layups on the scorebook and a free throw on the second one to make it 64-62 with 4:50 to play in favor of the Gamecocks.

Four straight points pushed the lead for Carolina back to six but the Tigers continued to work had and a Sims layup with one minute to play made it 70-68, Gamecocks.

Kotsar would make two free throws to make it 72-68 with 40 to play and then Carolina’s leading scorer, Chris Silva (eight points) would foul out on a foul of Duop Reath with 19 seconds to play. Reath made the first, missed the second and Booker rebounded with 19 seconds left. But LSU’s defense forced a turnover and LSU had the ball calling time out with 12 seconds to play.

Waters had the ball with the clock ticking down and despite bigger players in front of him calmly lifted the shot with less than 5 seconds to play from deep three-point range that tied the game at 72-72 and forced overtime. South Carolina inbounded with 3.7 seconds remaining but a desperation three from half court by Carolina was not close.

Tickets for Saturday’s game at the Maravich Center are available at the LSU Athletic Ticket Office or online at LSUtix.net.