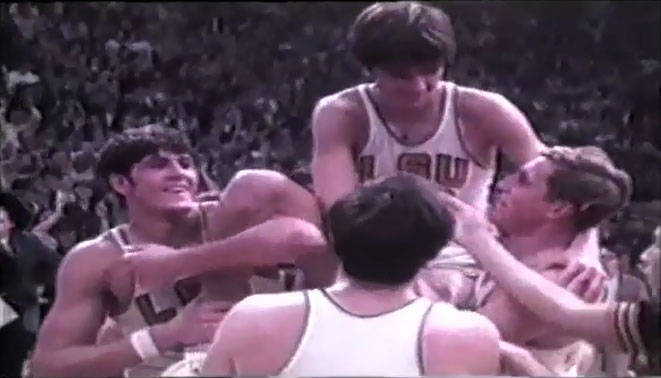 Written by the SEC Network

Featuring one of the most recognizable names in Southeastern Conference basketball lore, the latest chapter in ESPN Films’ SEC Storied series is “Maravich.” Premiering Monday, March 12 at 8 p.m. CT, on SEC Network, the film explores the life of “Pistol” Pete Maravich, one of the most prolific scorers and compelling personalities in basketball history.

He lived only 40 years, but no basketball star burned brighter than Pete Maravich. His story – of triumph, and tragedy – was in so many ways created by his father, Press, who taught him the game, and then coached him at LSU.

Directed by Fritz Mitchell, “Maravich” focuses on the dynamics of that father-and-son relationship in Baton Rouge, when with his gray floppy socks and flowing hair, Pete averaged a record 44.2 points a game and set the NCAA career scoring mark of 3,667 points in an era with no shot clock or three-point line. Pete’s scoring prowess was matched only by his wizardry with the basketball; he inspired record crowds all across the SEC and went on to become a star in professional basketball as well. In 1996, he was named one of the 50 greatest players in NBA history.

Beneath the mesmerizing aura, however, his world was falling apart. Pete was struggling with alcoholism while his mother was battling a depression that would ultimately lead to her suicide. Eventually, Pete would leave behind the game that created his legend, becoming a born-again Christian and a preacher, guiding his father’s religious awakening as well. Then, he’d die – of all places – on the court, after a game of pickup. “Maravich” tells the story of an American original, and the life of a basketball wonder cut short.

The Peabody and Emmy-winning Fritz Mitchell, who started his television career as a researcher for CBS Sports in 1982, has directed and produced documentaries for ESPN and PBS since 1998, including two films for the acclaimed 30 for 30 series (The Legend of Jimmy the Greek, Ghosts of Ole Miss). Currently living in Vermont with his wife and two children, Mitchell spent the early part of his career working in the capacity of Associate Producer, Associate Director and Feature Producer on live sporting events for both CBS Sports and NBC Sports.

“No one hit as many highs and lows in a 40-year life as Pete Maravich,” Mitchell said. “The central question of this film: Did the joy and exuberance of Pete’s life overshadow the tragedy and heartbreak? ‘Maravich’ is a father and son story, Press and Pete, coach and player. In a way, Pete was the first robo-athlete; he was a highly specialized performer who dedicated 100 percent of his childhood to his sport, but at what price? What was the cost?”

Advance press screeners of “Maravich” are available upon request, and a media screening is scheduled for Saturday, March 10 in St. Louis at the SEC Men’s Basketball Tournament. Additional details for the media event will follow.

About SEC Storied
ESPN Films launched the SEC Storied documentary series in September 2011, presenting fans the opportunity to explore the rich athletic history of the Southeastern Conference. From extraordinary athletes and coaches to defining games and moments, the series has featured films that focus on the SEC’s recent and more distant past, including one of the most-viewed documentaries in ESPN history, “The Book of Manning.” In 2015, SEC Storied received its first two Sports Emmy nominations for both “Outstanding Sports Documentary” and “Outstanding Music Composition/Direction/Lyrics” with the film “It’s Time: The Story of Brad Gaines and Chucky Mullins.”

About SEC Network
The Southeastern Conference and ESPN launched SEC Network on August 14, 2014. The network televises over 45 SEC football games, 100 men’s basketball games, 60 women’s basketball games, 75 baseball games, and other events from across the SEC’s 21 sports annually. Programming includes in-depth analysis and storytelling in studio shows such as SEC Nation, daily news and information with SEC Now, original content such as SEC Storied and SEC Inside, and more. Hundreds of additional live events are available for streaming exclusively on SEC Network’s digital companion, SEC Network+, via the ESPN app and SECNetwork.com. The network has 70 million subscribers in the U.S. and is also available in more than 50 countries throughout Europe, Middle East and Africa via ESPN Player, ESPN’s sports streaming service in the region.