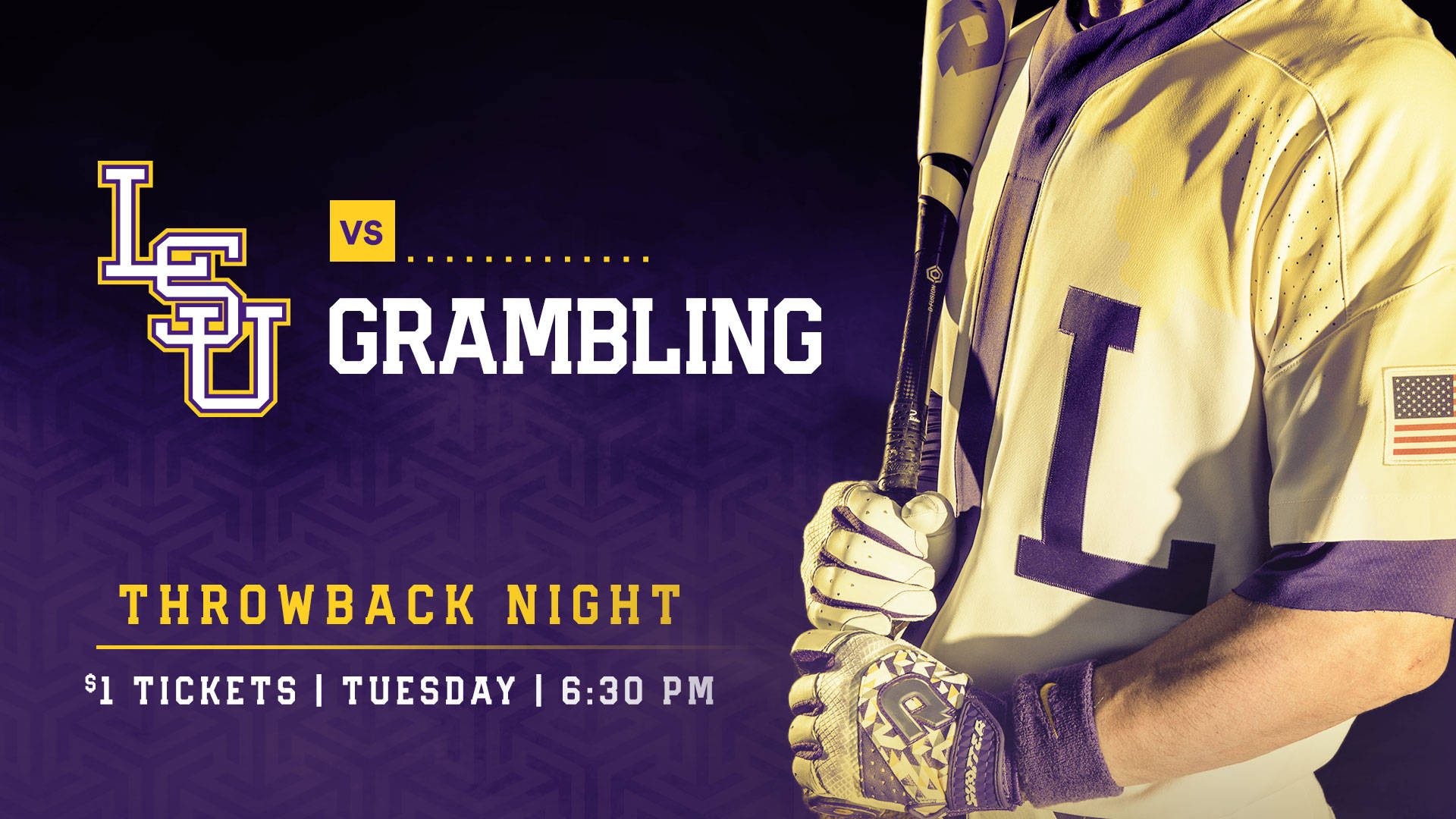 RANKINGS
LSU – No. 14 by Collegiate Baseball; No. 16 by Baseball America
GSU – unranked

ONLINE
SEC Network+ – the game may be viewed at WatchESPN.com and the Watch ESPN app

SERIES RECORD
LSU leads the all-time series with Grambling, 7-0, and the first meeting between the schools occurred in 2009. All seven of the prior meetings have been played in Baton Rouge. LSU defeated GSU,13-2, last season (April 4) in Alex Box Stadium, Skip Bertman Field.

SPECIAL PROMOTIONS
“Throwback” Night at Alex Box Stadium, Skip Bertman Field – both teams will wear “throwback” uniforms for the game, and there are $1 tickets available

QUOTING PAUL MAINIERI
“We’re facing a good Grambling team that beat FIU on Saturday in Miami. We’ve studied them carefully, and they have a much improved baseball team with a very good coach. It’s time for Cam Sanders to step up and be a guy we can count on Tuesday night, and hopefully he can save our bullpen for the remaining four games of the week. We’re going into the game with a positive frame of mind, and we’ll be ready to play on Tuesday night.”

ABOUT THE LSU TIGERS
• LSU won three of four games last week, including a series victory over No. 14 Texas in Alex Box Stadium, Skip Bertman Field … LSU is No. 14 in this week’s Collegiate Baseball poll, marking the 117th consecutive week the Tigers have appeared in the poll … LSU has been ranked every week since the beginning of the 2012 season.
• Junior second baseman Brandt Broussard led LSU to three wins in four games last week, batting .563 (9-for-16) with one double, five runs, two stolen bases and seven RBI … in the Tigers’ series victory over No. 14 Texas, Broussard hit .538 (7-for-13) with one double, three runs, one steal and six RBI … he was 4-for-5 at the plate in LSU’s 13-4 win over Friday night with one double, four RBI and two runs … Broussard is LSU’s leading hitter on the season, batting .478 (11-for-23) with one double, five runs, 10 RBI and three stolen bases … he is the son of Burke Broussard, LSU’s starting second baseman on its first College World Series team in 1986.
• Junior outfielder Antoine Duplantis hit. 389 (7-for-18) in four games last week with one double, two triples, five RBI and four runs scored … freshman outfielder Daniel Cabrera collected six RBI last week, including his first career collegiate home run, a solo blast in Saturday’s 10-5 win over Texas … as a team, the Tigers batted .351 (53-for-151) last week with 13 doubles, two triples, one homer and 38 runs (an average of 9.5 runs per game).
• Sophomore left-hander Nick Bush appeared in three of the Tigers’ four games last week and fired a combined 2.2 innings, allowing no earned runs with one walk and four strikeouts … sophomore right-hander Matthew Beck worked 2.1 shutout innings in two appearances, including a relief win over Texas on Saturday when he pitched 1.1 scoreless frames with no hits and two strikeouts.

ABOUT THE GRAMBLING TIGERS
• Grambling is 4-4 this season, and the Tigers are hitting .286 as a team with seven doubles, one triple, six homers and nine steals in 13 attempts. GSU’s pitching staff has a 6.15 ERA with 37 strikeouts in 67.1 innings.
• Senior left-hander Christian Marquez (2-0, 3.60 ERA) will start Tuesday’s game on the mound for Grambling. Marquez has worked five innings this season in two relief appearances, allowing two runs on four hits with three walks and four strikeouts. He was the starting pitcher when LSU and Grambling met last season on April 4, and he did not record an out. Marquez was charged with one run on two hits with one walk, throwing only 14 pitches.
• GSU is led at the plate by junior catcher Richard Ortiz, who is batting .355 on the year with four homers and 12 RBI.
• Head coach James Cooper is in his eighth season at Grambling, and he has compiled a 160-246 mark at his alma mater.