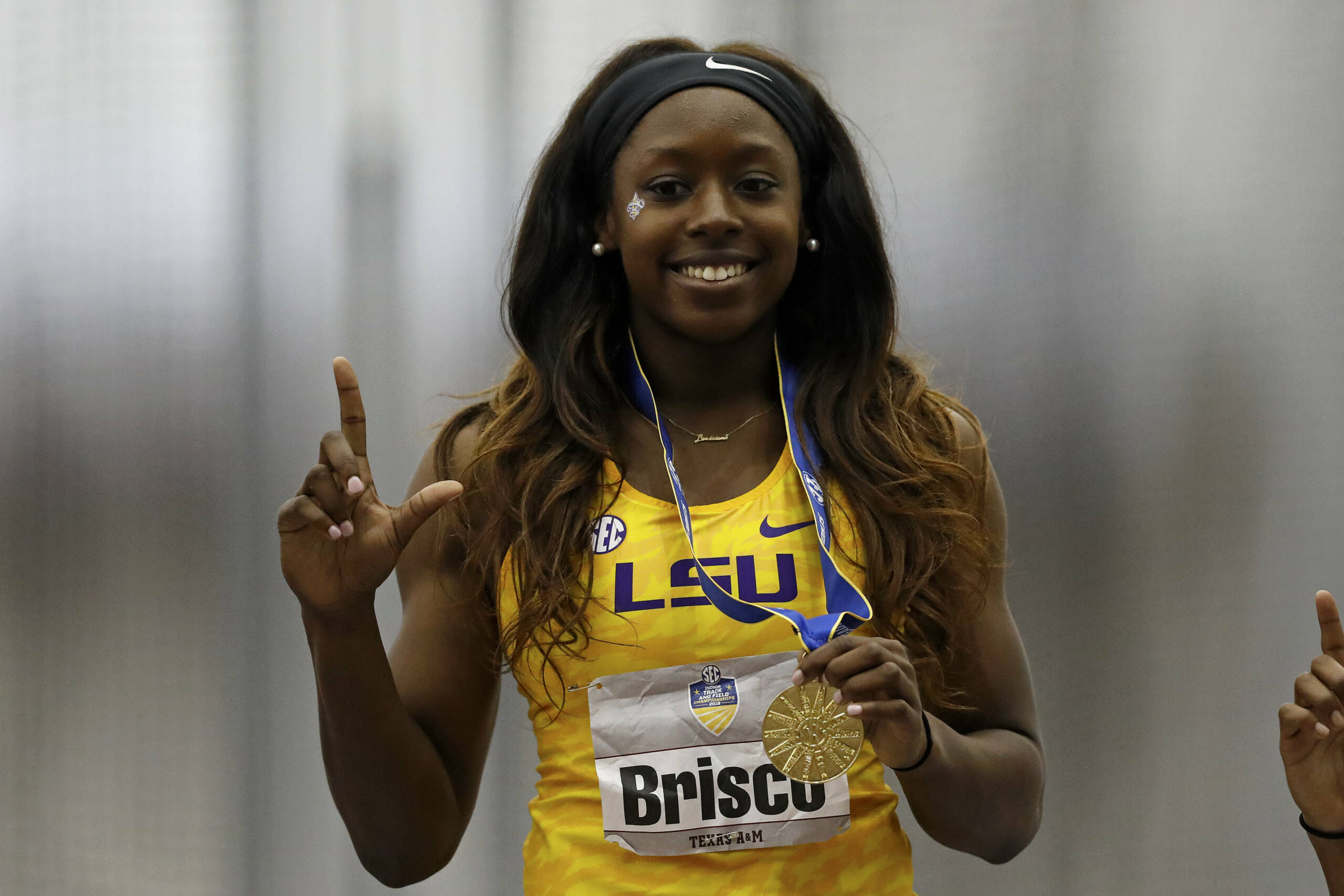 COLLEGE STATION, Texas – A 1-2 finish from Mikiah Brisco and Aleia Hobbs in the 60-meter dash highlighted the final day for LSU at the 2018 Southeastern Conference Indoor Championships here Sunday at the Gilliam Indoor Stadium on the campus of Texas A&M.

The 1-2 finish in the 60 meters from Brisco and Hobbs, along with a fifth place showing in the event by Kortnei Johnson, picked up a 22 points and helped propel the Lady Tigers to a fourth place overall finish.

Brisco, the 2016 SEC Indoor Champion in the 60-meter dash, ran a blazing 7.10, the fastest collegiate time this year. Brisco totaled 18 points to win the Cliff Harper Award as the top point earner at the meet.

The Lady Tigers closed out the meet by claiming the 4×400 meter relay with a season-best time of 3:30.85. The 10 points in the 4×400 relay by Rachel Misher, Cassondra Hall, Zakiya Denoon and Kymber Payne pushed the Lady Tigers’ point total to 63 to outscore Texas A&M (62 points) and Florida (61 points).

Arkansas claimed the women’s team title with 108 points, while Alabama with 90 team points held off Arkansas (88 points) to win the men’s crown. LSU finished 11th in the men’s standings with 30 points.

Hobbs, who was the 2017 SEC Indoor Champion in the 60-meters, was clocked at 7.14, while Johnson came in at 7.22. All three are qualified for the NCAA Indoor Championships in two weeks.

LSU opened the scoring on the men’s side on Sunday with a third place showing from Damion Thomas in the 60-meter hurdles in the first event of the day. Thomas picked up the bronze medal with a time of 7.82.

The LSU women followed with Tonea Marshall‘s third place time of 8.08 in the 60-meter hurdles. Brittley Humphrey clocked a time of 8.14 seconds to place sixth in the event.

Jaron Flournoy took home the bronze medal in the men’s 200 meter dash with a time of 20.62.

In the women’s 400-meter dash, Rachel Miser turned in a time of 53.23 in the second heat of the finals to finish fifth overall.

LSU’s 4×400 relay team rounded out the scoring for the Tigers with a fourth place finish in the final event of the meet. The Tiger relay team of Correion Mosby, Flournoy, Renard Howell, and Jahnoy Thompson turned in a season best time of 3:04.82.

In the field events, Da’Quan Bellard and Christian Miller each turned in top eight finishes in the triple jump. Bellard set a personal best with a leap of 50-3 ½ (15.33m) to finish sixth, while Miller went 49-11 (15.21m) to place eighth.

On the women’s side, LSU freshman Abigail O’Donoghue had a personal best leap of 5-8 ¾ (1.75m) in the women’s high jump to place eighth and add a point to the Lady Tiger total.

LSU coach Dennis Shaver comments on the SEC Indoor Meet
“I thought our women had a really good meet. Coming in, I told the staff that based upon how things had being going that if we come here and score 50 we probably had a pretty good meet. We scored 63 points and ended up in fourth place. I’m really proud of the kind of effort we got from our women.

“Most importantly is that we put ourselves in a much better position for the NCAA Indoor Championships in two weeks with the women’s team.”

On LSU’s 2-4 finish in the 200-Meter
“The 200 for Mikiah Brisco was huge for us. We came into the meet with both Kortnei (Johnson) and Mikiah (Brisco) wondering whether we could even score the 200 because it’s such a good event in this conference.”

Overall
“Our women were ranked sixth in the nation coming into to this meet and I won’t be surprised if we don’t move up two or three spots after our performance here.”