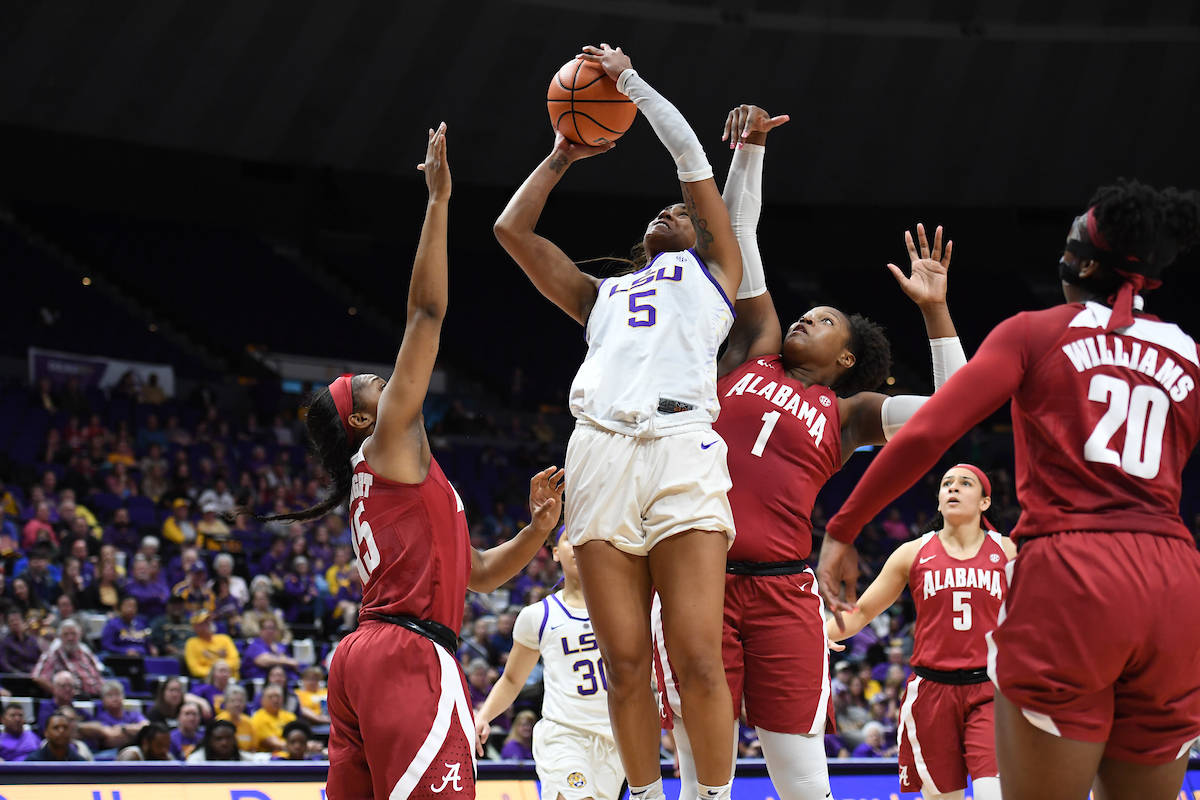 BATON ROUGE – In the final game of the regular season, the No. 24 LSU women’s basketball team took down the Alabama Crimson Tide in overtime by a score of 79-78 behind a career-high 27 points from Ayana Mitchell at the Maravich Center Sunday.

The Lady Tigers moved to 19-8 (11-5 SEC) with the win while Alabama fell to 17-12 (7-9 SEC). The victory along with wins by Georgia and Texas A&M earn LSU the No. 4 seed and a double-bye in next week’s SEC Tournament at Bridgestone Arena in Nashville. LSU’s first game of the tournament is set for Friday, March 2 at approximately 2:30 p.m.

Chloe Jackson led LSU in scoring with a season-high 31 points, eight rebounds, three assists and a steal. Mitchell added a career-high 27 points and 12 rebounds, her seventh double-double of the season.

LSU jumped out to an early 10-2 run, but Alabama was able to trim LSU’s eight-point lead to a two-point lead by the end of the first quarter as LSU lead 14-12.

Leading 23-20 halfway through the second quarter, the Lady Tigers went on a 12-0 run and led by as many as 15 before heading into the halftime break up 35-22.

The Crimson Tide came out strong to start the second half, trimming LSU’s lead to as few as four points before LSU responded with ten unanswered points to increase their lead to a game-high 16 points with 56 seconds remaining in the third.

Alabama outscored LSU 23-10 in the fourth quarter, taking the lead with four seconds remaining on a jumper from Hannah Cook. LSU called a timeout and inbounded the ball, which was immediately met with a foul from Alabama. With under two seconds remaining, freshman Khayla Pointer inbounded a second time to the outstretched arms of Mitchell, who laid the ball up and in to tie the game as time expired, forcing LSU’s first overtime game of the season.

Jackson took over for the Lady Tigers in overtime, scoring six of LSU’s nine points. LSU held on to its 79-78 lead over the final minute-and-a-half of the extra period as neither team scored a point to close the game out. Alabama ended the game with three consecutive missed field goals under the basket and a fourth was blocked by Mitchell to seal the win.

LSU shot 46 percent from the field and outscored Alabama 32-22 in the paint. Alabama won the rebound battle, 50-40, but LSU was able to consistently force turnovers and score 21 points off of Alabama’s miscues.

The Lady Tigers led for 39:17 in a game that saw seven lead changes, while Alabama led for just 1:50.