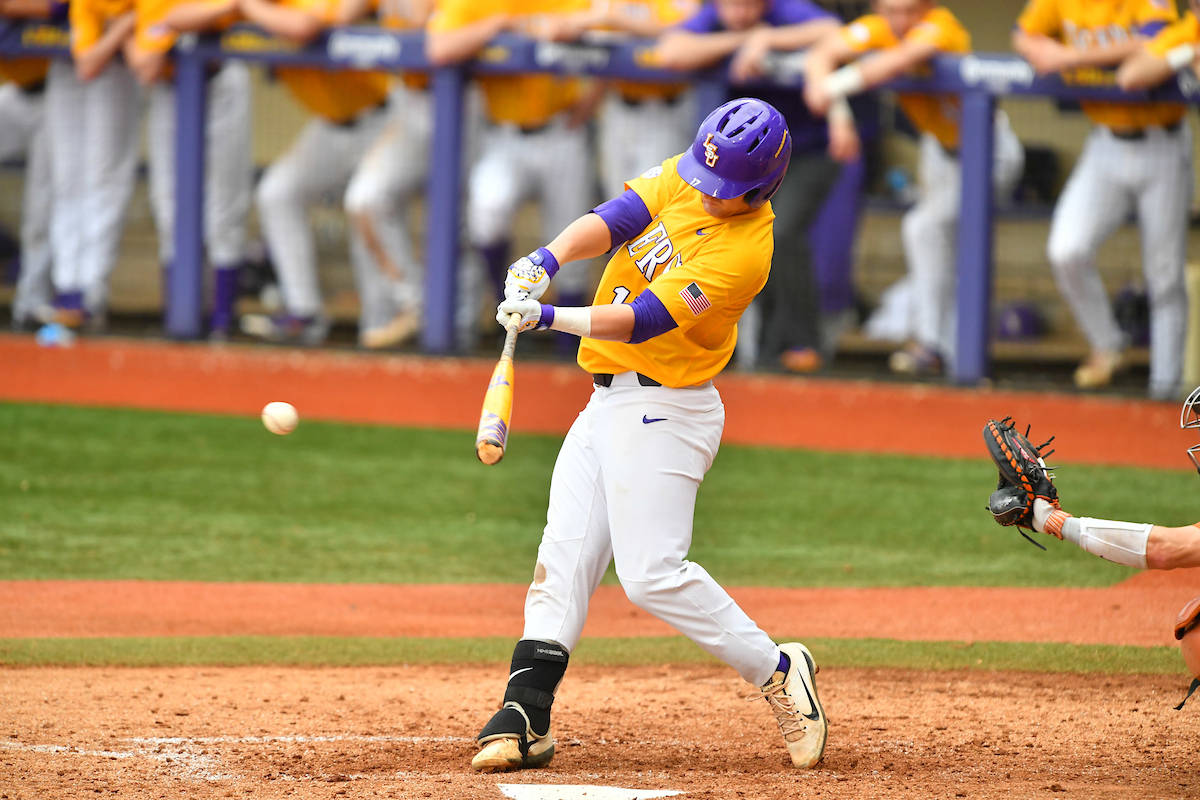 BATON ROUGE, La. – No. 14 Texas put up 11 runs on 13 hits to propel the Longhorns past the No. 15 LSU baseball team, 11-1, in the final game of the non-conference series Sunday afternoon at Alex Box Stadium, Skip Bertman Field.

The Tigers return to action Tuesday with a 6:30 p.m. CT contest against Grambling in “Throwback Night” at Alex Box Stadium, Skip Bertman Field. The game will be available online only through the SEC Network+, which is accessible through Watch ESPN and the Watch ESPN app.

“It was a rough day, there’s no sugar-coating that,” said LSU coach Paul Mainieri. “We had a chance early to take control of the game, but we had some bad luck, and then the game started to get away from us. We left five runners on base, four in scoring position, in the first two innings. Had we gotten the lead early, maybe things would have been a little bit different.

“We ended up having 10 hits, but we just couldn’t put it all together. Give Texas credit, they were very good with the bats today. Overall, we’re pleased that we won two out of three this weekend against an outstanding Texas team, and we’ll keep building from here and get back into a positive frame of mind.”

In his second start of the season, Todd Peterson (0-2) pitched four innings and allowed five runs on seven hits. The sophomore right-hander walked two and struck out two.

Right-hander Blair Henley (1-0) earned the win for the Longhorns after firing six innings and limiting the Tigers to six hits. He struck out three and walked three.

Texas jumped out to the early 4-0 lead in the top of the third. Right fielder Tate Shaw led off the innings with a double to left-center. With Shaw on third and two outs after a pair of groundouts, shortstop David Hamilton doubled to right field to plate Shaw. After a single by left fielder Masen Hibbeler and an intentional walk to second baseman Kody Clemens loaded the bases for the Longhorns, designated hitter Zach Zubia doubled to center field to clear the bases.

The Longhorns added another run in the top of the fourth inning. With one out, Shaw singled to left-center and moved to third on a single by catcher Michael McCann. Center fielder Duke Ellis squeezed Shaw home with a sacrifice bunt as Texas took the 5-0 lead.

Back-to-back walks put Hibbeler and Clemens on first and second to start the fifth inning, and the duo moved to scoring position on a double steal. With the bases loaded after another walk, third baseman Ryan Reynolds singled up the middle to plate two runs for the Longhorns and extend their lead to 7-0.

In the top of the seventh, Texas put runners on after Reynolds was hit by a pitch and Shaw dropped a bunt for a single. They moved to scoring position after a wild pitch, and the Longhorns loaded the bases after McCann was hit by a pitch. A fielder’s choice brought home Reynolds, and Hamilton followed with a single to right field to score McCann. With runners on the corners and two outs Hibbeler hit a RBI double to left-center field, which scored Ellis who reached on a fielder’s choice earlier in the inning. Clemens singled to center, driving in Hibbeler and giving Texas the 11-0 advantage.

The Tigers broke up the shutout with two outs in the bottom of the ninth. After designated hitter Chris Reid singled to right field, center fielder Antoine Duplantis doubled to left field to score the junior and make it 11-1 Texas.

Right-hander Devin Fontenot pitched the fifth inning for the Tigers. He allowed two runs on one hit, walked three and struck out one. Ma’Khail Hilliard, Will Reese, Clay Moffitt and Brandon Nowak combined for the final three innings. The four Tigers allowed four runs on five hits, struck out four and walked two. .