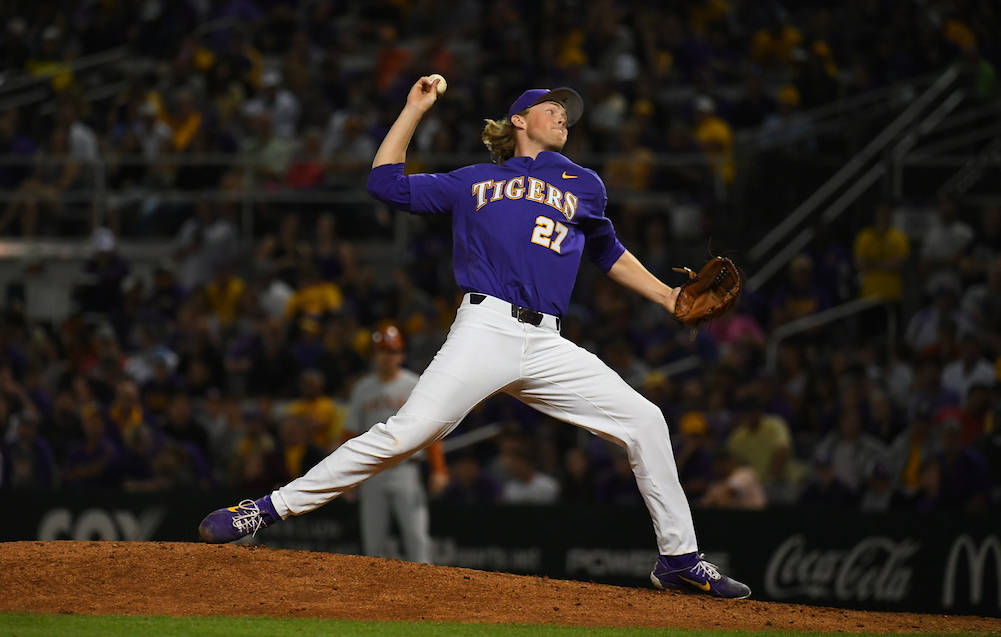 BATON ROUGE — After trailing Texas 5-0, the No. 15 LSU baseball team put up a five-run fifth inning and scored 10 unanswered runs to clinch the series, 10-5, against the No. 14 Longhorns Saturday night at Alex Box Stadium, Skip Bertman Field.

The series finale between LSU and Texas has been moved up to a 1 p.m. CT start time Sunday at Alex Box Stadium, Skip Bertman Field. The game will be available online only through the SEC Network+, which is accessible through Watch ESPN and the Watch ESPN app.

Right-hander Todd Peterson will get the nod in Sunday’s contest for the Tigers while the Longhorns are slated to start right-hander Blair Henley.

“We’re trailing 5-0, we pitched out of jam to keep it 5-0, and their pitcher was pretty much dominating,” said LSU coach Paul Mainieri. “I just can’t say enough how proud I am of our guys; they didn’t feel sorry for themselves and they didn’t give up, and they just kept competing.

“The five-run rally in the fifth inning was just outstanding against a great pitcher. That’s why the games are scheduled for nine innings – 27 outs have to be earned before the game is over, and we were able to come through with clutch at-bats when the game was on the line. It was a tremendous team victory; I can’t believe we’re having games like this so early in the season, it felt like a Super Regional.”

The Tigers’ 14-hit attack was highlighted by first baseman Bryce Jordan, who was 3-for-4 with two RBI and two runs scored.

LSU exploded for five runs on seven hits in the fifth inning to knot the game at 5-5. With one out first baseman Bryce Jordan singled to right-center field against Texas starter Chase Shugart, moved to second on a fielding error by the center fielder and advanced to third on a wild pitch. Second baseman Brandt Broussard ripped an infield single off of the pitcher to drive in Bryce Jordan. The junior stole second and scored when shortstop Hal Hughes ripped a double down the left field line.

With Hughes on third after a groundout, designated hitter Austin Bain ripped a double to centerfield to drive in Hughes. Center fielder Antoine Duplantis drove a triple to right field to score Bain, and catcher Hunter Feduccia followed with a single of his own to right field to bring home Duplantis as LSU tied the game.

The Tigers added three insurance runs in the eighth to make it 10-5. Right fielder Daniel Cabrera sent a blast to right field to lead off the inning. With two outs, Feduccia singled through the right side, and Webre took a walk to put runners on first and second. The Tigers moved into scoring position on a wild pitch. Third baseman Jake Slaughter drew a walk to load the bases, and Bryce Jordan placed a single into left field to bring in LSU’s final runs of the night.

Right-hander Caleb Gilbert started the game for the Tigers and pitched four innings. The junior right-hander allowed five runs on 10 hits, walked two and struck out one.

LSU’s bullpen was dominant once again and did not allow a run in five innings of work. Taylor Petersen was the first man out of the bullpen. The freshman southpaw allowed only one hit and struck out one in 1.2 innings of work.

Sophomore Matthew Beck (1-0) earned his first win of the season after firing 1.1 innings, walking one and striking out two. Texas reliever Bryce Elder (1-1) was charged with the loss as he surrendered two runs on one hit in one inning with one walk and one strikeout.

Right-hander Chase Shugart tossed 4.2 innings for the Longhorns, and he was charged with five runs on eight hits while recording four strikeouts.

Texas jumped out to the early 2-0 lead in the top of the second. Catcher DJ Petrinksky led off with a double to right-center, and pinch hitter Zach Zubia followed with a two-run shot to left-center.

The Longhorns tacked on another run in the top of the third after third baseman Kody Clemens launched a home run to right field, giving Texas the 3-0 edge.

In the top of the fourth with runners on the corners and two outs, right fielder Austin Todd hit an infield single and drove in center fielder Duke Ellis. After four innings, LSU trailed Texas 4-0.