Track and Field Completes Day One of SEC Championships 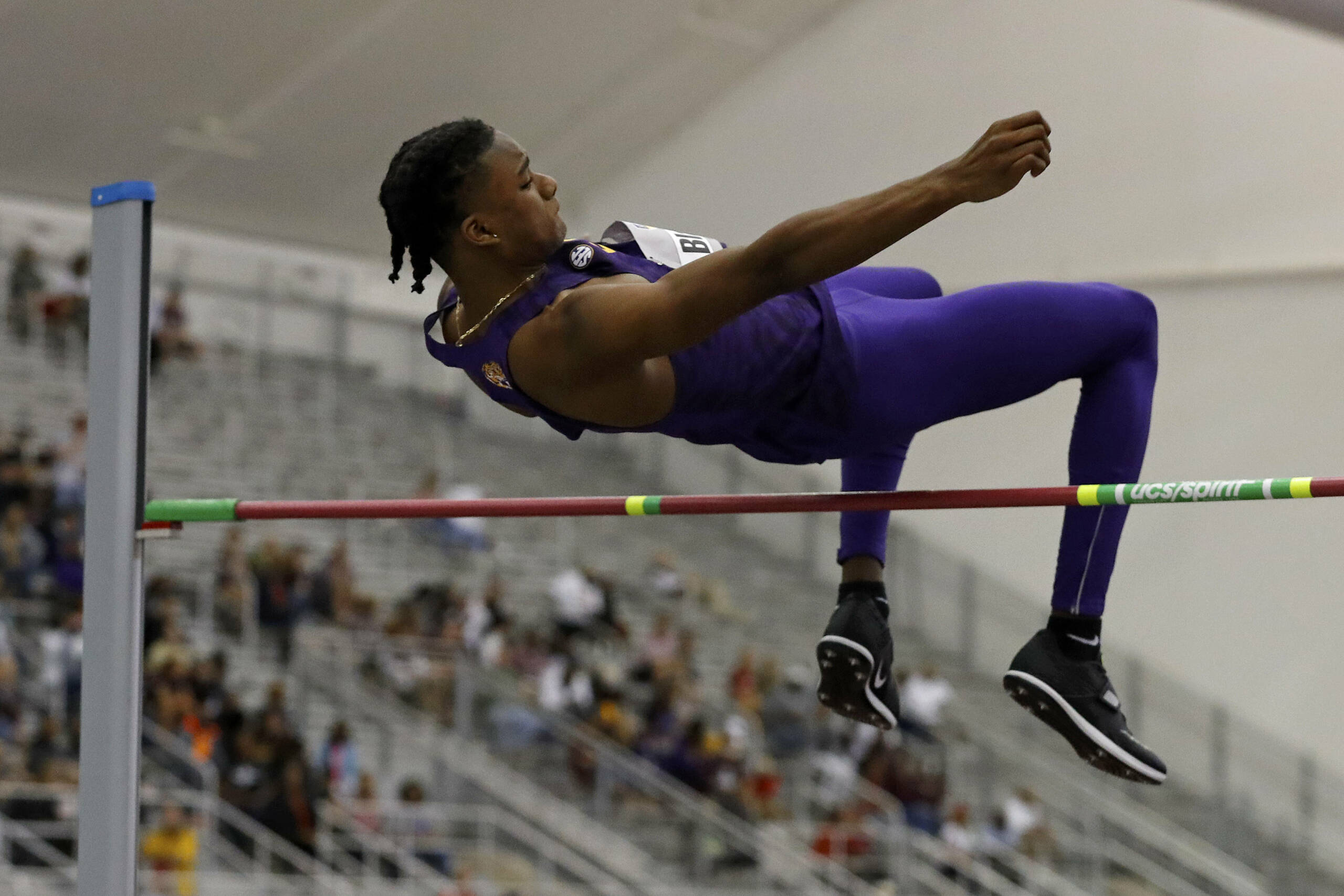 COLLEGE STATION, Texas – LSU freshmen Jake Norris and JuVaughn Blake picked up points on the opening day of the Southeastern Conference Track and Field Indoor Championships and the men and women runners combined to break 14 personal-best times Saturday at the Gilliam Indoor Stadium.

Norris picked up LSU’s first points of the SEC Championships with a seventh place finish in the men’s weight throw. Norris, from Windsor, Berkshire, England, set a personal best in the event with a toss of 67-2 ¼ (20.48m) on his third attempt, good enough for seventh place and two points for the Tigers.

Blake picked up a pair of eighth place finishes in the high jump and long jump here Saturday running LSU’s total to four points. Blake, from Huntsville, Alabama, scored one point in the high jump with a leap of 7-0 ½ (2.15m). Blake then turned his attention to the long jump, notching a scoring mark of 24-10 (7.57m).

LSU goes into Sunday with seven scoring opportunities for the men and 17 for the women. Things kick off at 5:01 p.m. CT with the running of the 60 meter hurdles. The finals will be televised live on the SEC Network and streamed on WatchESPN.com.

Damion Thomas opened the events on Saturday afternoon with a 7.93 in the prelims of the 60 meter hurdles for seventh place and a spot in the final. For the women, Brittley Humphrey posted a personal best 8.09 in the event for fifth and Tonea Marshall earned the seventh spot overall with a time of 8.21.

Jahnoy Thompson (46.67) and Christian Boyd (47.20) each finished with top times for their careers in the 400 meter. Rachel Misher finished fifth overall with a time of 53.31 to move on to the final. Kymber Payne just missed out on moving to running on Sunday with a time of 53.62 for ninth overall.

Ersula Farrow competed in the opening heat of the 800 meter and posted a time of 2:09.62. Farrow took the sixth spot overall to earn a spot in the final.

In the final sprint event of the day, Kortnei Johnson put on a show with a 22.88 for a personal best and the top time in prelims. Brisco finished third overall with a time of 22.93 for a new best time.

In addition to the Tigers moving on to finals based on their runs from Saturday, LSU will also have athletes in the 5000 meter, distance medley, 4×400 relay, women’s weight throw, men’s triple jump and women’s high jump.

Of course those are just opportunities. We have to be able to execute well. I was really proud of two of our freshmen that scored for us today. (JuVaughn) Blake scored for us in two events that were going on simultaneously in the long jump and high jump. I was real proud of the kind of effort and focus that he had. He was coachable and did the things we asked him to do.

Jake Norris threw a personal best by over a meter in the weight throw to get us a couple points for the men’s team, which is a real tribute to him because that’s not even his primary event. He’s a hammer thrower outdoors so we really appreciate him doing that for us during the indoor season.

Tomorrow it boils down to our women and our sprint men really executing well. I thought they did a fantastic job today, which was obvious by all of the personal bests that our team had. The great thing about it is that I think we picked up probably five or six NCAA qualifiers today with (Brittley) Humphrey in the hurdles with a personal best and our guys in the 200 and both girls (Brisco and Johnson) in the 200.”