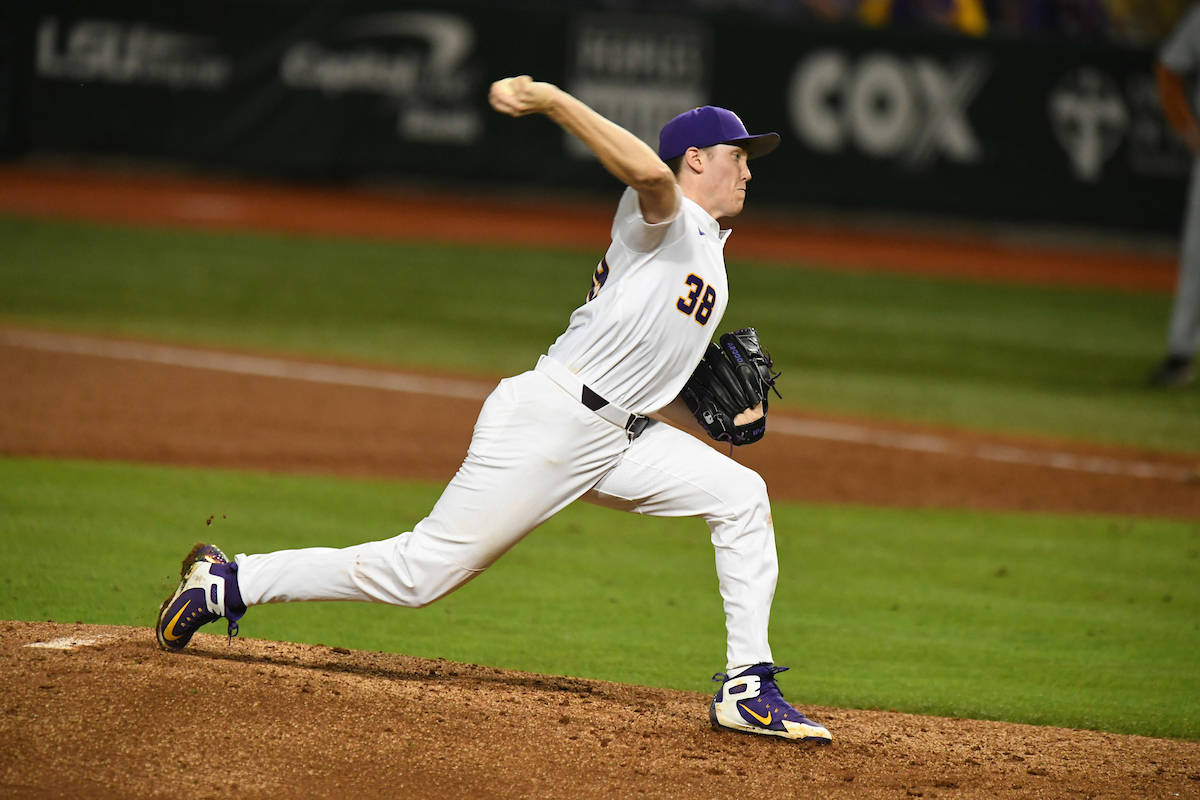 BATON ROUGE – No. 15 LSU bolted to a 5-0 lead in the first inning Friday night, and the Tigers went on to post a 13-4 win over No. 14 Texas Friday evening in Alex Box Stadium, Skip Bertman Field.

With the win, the Tigers improved to 3-2 on the season and Texas fell to 3-2. LSU collected 16 hits in the contest, including a 4-for-5, four-RBI performance from junior second baseman Brandt Broussard.

The Tigers will return tomorrow at 6:30 p.m. for the second game of the Texas series. The game will be available on the SECNetwork+, which is accessible through WatchESPN and the WatchESPN app.

“We were able to get a lead early, and it was nice to play with a lead and see if we could hold it,” said LSU coach Paul Mainieri. “I thought Zack Hess was so great and just gave everybody on our team a lot of hope going forward that we’ve got a guy we can run out there on Friday nights and give our team a chance to win.”

The Tigers chased Texas starter Nolan Kingham (1-1) from the game after three innings of work. Kingham took the loss after giving up eight hits and allowing eight runs (four earned) before Matt Whelan entered and gave up two runs in the fourth inning. The Tigers knocked in three runs in Brandon Ivey’s 1.2 innings of work before Parker Joe Robinson came in and closed out the final 2.1 innings without giving up a run.

Broussard, batting eighth in the LSU lineup, and freshman shortstop Hal Hughes, bating ninth, combined to go 6-for-9 at the plate with six RBI and three runs scored.

After Hess struck out three Texas batters in the top of the first, the LSU bats exploded to start the bottom of the inning as centerfielder Antoine Duplantis singled to right field to score Austin Bain from second base. Beau Jordan reached on a fielder’s choice and Duplantis and Hunter Feduccia scored on an error by Kingham.

Broussard stepped to the plate and ripped a double to left-center field, scoring both Jordan brothers as LSU led Texas 5-0 after just one inning of play.

The Longhorns countered in the top of the second inning with an RBI triple from Tate Shaw and a sacrifice fly from Ryan Reynolds to score two runs.

With the bases loaded in the bottom of the third inning, freshman Hal Hughes lined a single to left field to score Beau Jordan. Daniel Cabrera followed up with a double to right that plated Broussard and Bryce Jordan to stretch LSU’s lead to 8-2.

Broussard picked up his third and fourth RBI in the bottom of the fourth with a single right up the middle of the infield to score Jake Slaughter and Beau Jordan, giving LSU the 10-2 lead.

After a scoreless fifth, the Tigers added three more runs in the sixth, beginning with a single up the middle from Hughes that scored Bryce Jordan. Cabrera grounded out to first, advancing Hughes to second and scoring Broussard, before a double to deep center field from Bain plated Hughes to give LSU the 13-2 lead.