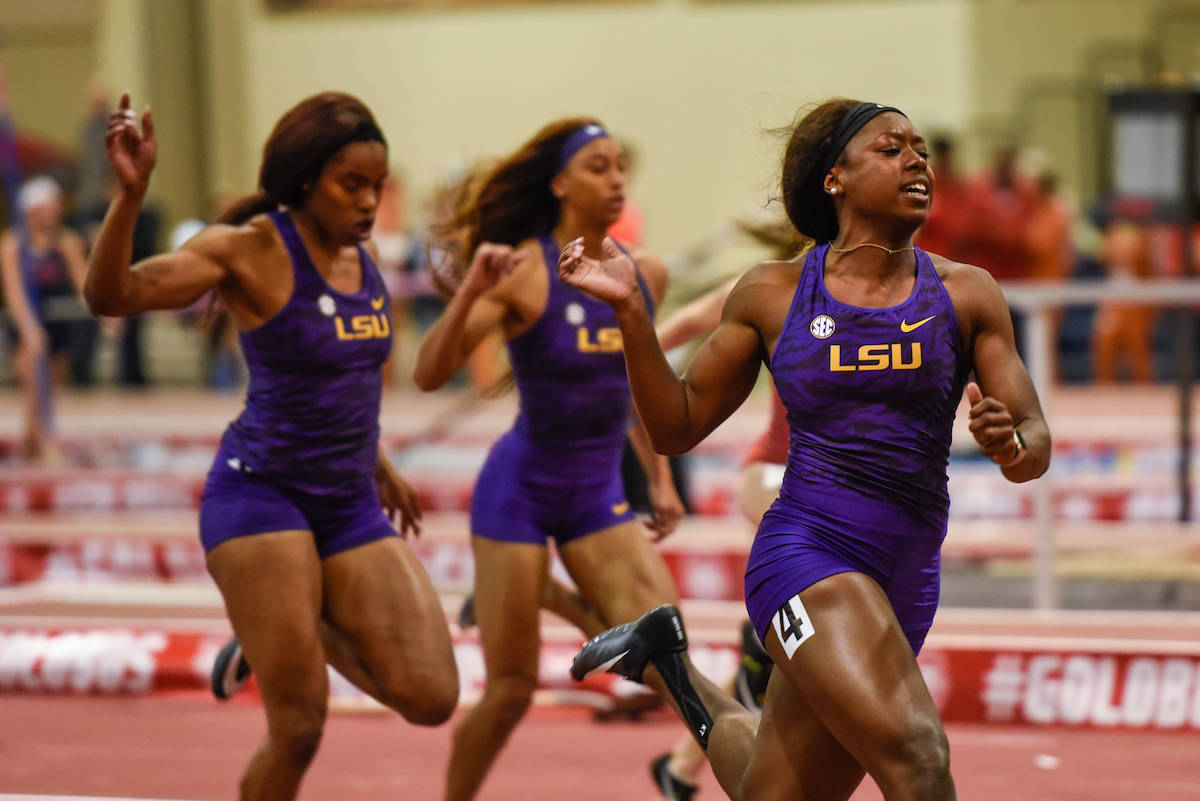 COLLEGE STATION, Texas – The LSU Track & Field teams will return to Texas this weekend as Texas A&M will host the 2018 SEC Indoor Track & Field Championships to kickoff postseason action. All events will run Saturday and Sunday, Feb. 24-25, at Gilliam Stadium in College Station.

The SEC Championships will feature a loaded field, scheduled to begin Saturday at 11 a.m. CT with the women’s pentathlon. The 3,000-meter run will wrap up Saturday’s action, beginning at 6:45 p.m. Sunday’s session will commence with the men’s heptathlon at 2:30 p.m. and will run through the finale of both 4×400-meter relays, scheduled with an 8:27 p.m. start.

Fans can watch the Tigers and Lady Tigers in action on Saturday through SEC Network+ with the broadcast scheduled to begin at 2:55 p.m. CT, and for the first time, the final day of the SEC Indoor Track & Field Championships will be televised live on the SEC Network beginning at 5 p.m. Live results can also be found at flashresults.com.

The Lady Tigers currently hold a league-leading 12 SEC Indoor women’s titles all-time, and they along with the men’s squad, will attempt to dethrone the Razorbacks of Arkansas, who captured men’s and women’s SEC Indoor Championships a season ago.

LSU’s women were runner-ups as a team in 2017 with a solid 94-point effort. The Lady Tigers only trailed champion Arkansas by 12.5 points. They will look to build upon last year’s performance as they defend two event-titles and returning 16 total runners from a season ago, six of whom notched Top-five finishes.

Junior Rachel Misher and senior Kymber Payne also return as defending SEC Champions as both were members of the women’s 4×400-meter relay winning-squad from 2017. Misher also earned a Top-five finish in the 400-meter.

With just one remaining opportunity to post qualifying marks for the NCAA Division I Indoor Track & Field Championships, several Tigers and Lady Tigers look to improve their rankings on the national leaderboards after the conclusion of the weekend.

As the regular-season has come to a close, the Tigers (4) and Lady Tigers (9) both have multiple NCAA qualifying marks heading into the first week of postseason action according to TFRRS.

Brisco, Hobbs and Johnson still pace the nation in the women’s 60-meter as the upperclassmen respectively hold the three best times in the nation for the 2018 indoor season. Sophomore Cassondra Hall (No. 9) joins in the Top-10 as well in the event.

Brisco’s 7.08-second time at altitude ties her for the sixth-fastest time in the world this season, and currently holds the No. 1 spot in LSU-history. At the time, Brisco’s mark captured the nation’s best time from Hobbs (7.14), and her time marks the second-fastest 60-meter time in NCAA history.

Since then, Hobbs has shaved her time down to 7.12 seconds, placing herself No. 2 nationally and in school history, trailing only Brisco. Hobbs’ 7.12 in Fayetteville gave her the 20th-fastest time in the world this season.

Johnson recorded her 7.18 in Fayetteville as well, and similar to Brisco and Hobbs, the upperclassmen earned of the school’s best, sitting tied for the No. 6 spot all-time.

On the men’s side, freshman Damion Thomas (60-meter hurdles) holds the seventh-best time in the nation, and the group of Correion Mosby, Jaron Flournoy, Renard Howell and Jahnoy Thompson (4×400-meter relay) sit at No. 6.

After earning back-to-back SEC Freshman of the Week honors to close out the regular-season, JuVaughn Blake currently sits No. 9 in the men’s high jump and No. 12 in the long jump.

Sunday marks the last day any team can strengthen its NCAA Championship roster with athletes achieving qualifying performances for the national meet. The Top-16 individuals and Top 12 relays in each event that declare will return back to Gilliam Stadium in College Station to compete at the 2018 NCAA Division I Indoor Track & Field Championships held March 9-10.