Tigers Meet Texas This Weekend at The Box 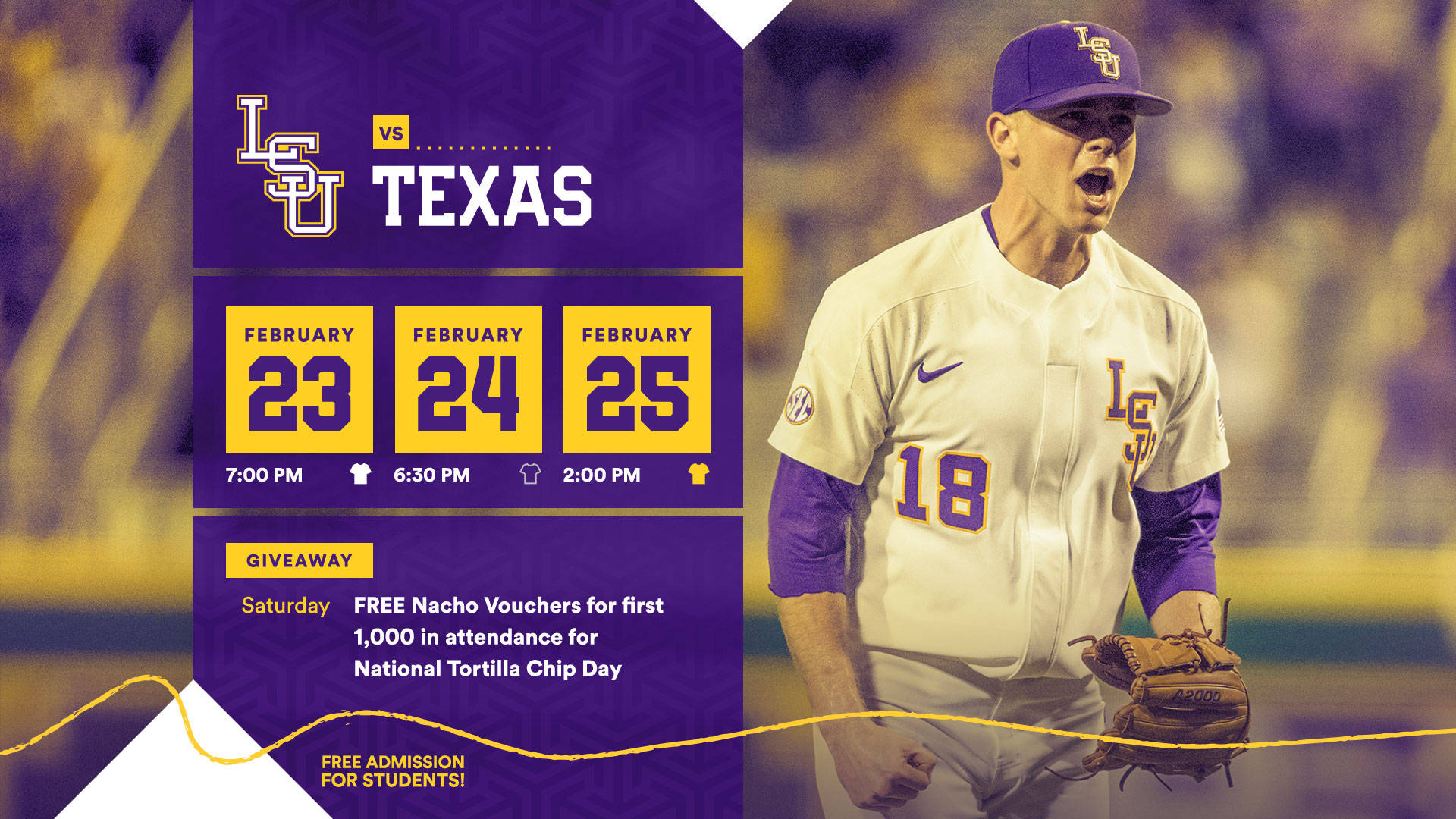 ONLINE
SEC Network+ – the games may be viewed at WatchESPN.com and the Watch ESPN app

SERIES RECORD
Texas leads the all-time series with LSU, 21-10-1, and this weekend’s matchup marks the Longhorns’ first visit to Baton Rouge since 1999, when UT opened the year by winning two of three games over the Tigers. This weekend’s series is the first meeting between the schools since the 2009 College World Series Finals in Omaha, Neb., where LSU won two of three games over the Longhorns to claim the ’09 National Championship. LSU is scheduled to make a return trip in 2019 to Austin for a three-game series. LSU and Texas each have won six College World Series titles, which is the second-highest total in NCAA Division I history and trails only Southern California, which has 12 baseball national championships.

QUOTING PAUL MAINIERI
“Texas is one of the ‘bluebloods’ of college baseball, and I like to think LSU is as well, so to have a series between these two schools is ultra-exciting. I hope we’ll play at a higher level for our fans this weekend than we did last weekend. We’d like to repay our fans this weekend for their loyal support. I think our team gained some confidence with Wednesday’s win over New Orleans, and I know we’ll be ready to play against an outstanding Texas team.”

ABOUT THE TIGERS
• LSU evened its record at 2-2 on Wednesday night with a 14-6 win over New Orleans in Alex Box Stadium, Skip Bertman Field. The Tigers’ offense erupted for 14 runs on 12 hits, including four doubles and one triple. LSU trailed 5-4 entering the bottom of the sixth inning, but the Tigers exploded for four runs in both the sixth and seventh innings to earn the victory. Eight of the nine players in the LSU starting lineup produced at least one RBI.
• Senior outfielder/DH Beau Jordan is LSU’s leading hitter this season, batting .417 (5-for-12) with three doubles, two homers, six runs and three RBI. In last weekend’s Notre Dame series, he batted .500 (4-for-8) with two doubles, two homers, two RBI and four runs scored.
• Junior second baseman Brandt Broussard, a JUCO transfer from Delgado Community College, is off to a strong start, batting .400 (4-for-10) with four RBI, two runs and a team-best two stolen bases.
• Freshman right-hander Trent Vietmeier has turned in two straight solid relief outings, allowing one run on five hits in 6.2 innings with one walk and a team-high eight strikeouts. Sophomore right-hander Matthew Beck has also been effective out of the bullpen, firing 3.2 shutout innings in two appearances with one hit, no walks and six strikeouts.
• Senior right-hander Austin Bain was the winning pitcher on Friday versus Notre Dame, as he blanked the Irish over the final two innings, allowing no hits, one walk and four strikeouts … Bain also collected his first career collegiate hit in his first career plate appearance, as he singled sharply as a pinch hitter in Sunday’s contest against Notre Dame … Bain started at DH Wednesday in the Tigers’ win over New Orleans, collecting one double and two RBI.
• The paid attendance figure of 12,844 for Friday night’s LSU-Notre Dame contest was the largest in LSU Baseball history, and the paid attendance figure of 12,223 on Saturday was the sixth-largest in program annals.

ABOUT THE LONGHORNS
• Texas is 3-1 this season, winning two of three games over Louisiana-Lafayette last weekend and defeating Lamar, 7-2, on Wednesday night.
• The Longhorn pitching staff has a 1.25 ERA in four games, having allowed just five earned runs in 36 innings. Texas pitchers have recorded seven walks and 30 strikeouts.
• Texas is batting .236 as a team entering the LSU series with four doubles, one triple and one homer. The Longhorns have six steals in eight attempts. Junior Masen Hibbeler leads the Horns with a .471 (8-for-17) batting average; all eight of his hits are singles.
• Texas coach David Pierce – the head coach at Tulane in 2015 and 2016 – is in his second year at the helm of the Longhorn program after taking over for the legendary Augie Garrido, who led Texas to College World Series titles in 2002 and 2005.Garrido is the winningest coach in NCAA Division college baseball history with a 1,975-951-9 record. He also led Cal State Fullerton to CWS championships in 1979, 1984 and 1995.