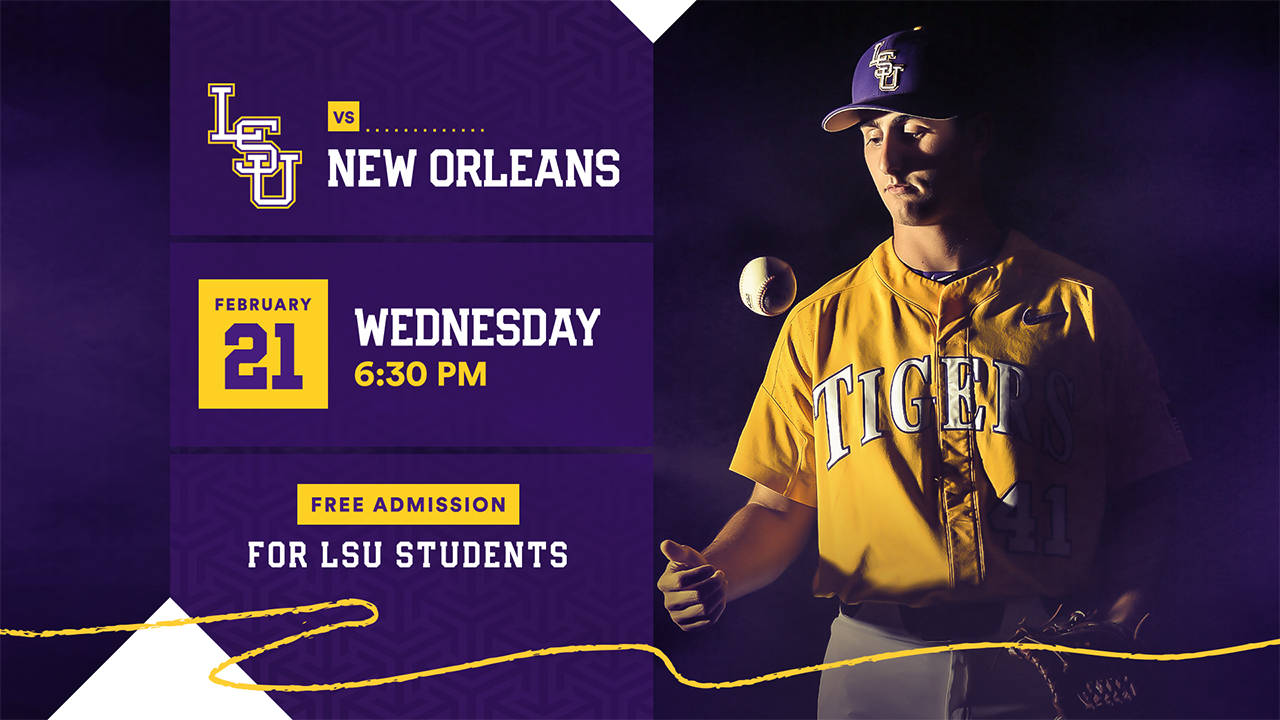 RANKINGS
LSU – No. 15 by Collegiate Baseball; No. 22 by Baseball America
UNO – unranked

ONLINE
SEC Network+ – the game may be viewed at WatchESPN.com and the Watch ESPN app

SERIES RECORD
LSU leads the all-time series with New Orleans, 59-36, though the Privateers won both matchups last season, 11-8 in New Orleans and 7-4 (15 innings) in Baton Rouge. LSU had won eight straight games over UNO prior to last season. LSU coach Paul Mainieri played for two seasons at UNO under former Privateers coach Ron Maestri in 1978 and ’79. Third-year UNO coach Blake Dean played at LSU under Mainieri from 2007-10 as an outfielder/first baseman, earning 2008 first-team all-America honors and helping lead the Tigers to the 2009 College World Series title.

QUOTING PAUL MAINIERI
“Last year, New Orleans beat us twice so they will be fired up; everybody’s fired up to play LSU. We’ve got to be ready for that; we don’t have time to hang our heads and feel sorry for ourselves. Hopefully, Cam Sanders will go out there and give us a good, quality start against the Privateers. We need that, we need somebody to step up and be a leader. You just don’t have a lot of time to feel your way through the season; the competition is so good, you’ve got to be ready to play every night.”

ABOUT THE TIGERS
• Junior right-hander Cam Sanders will make his first career LSU appearance Wednesday night in a start against UNO. Sanders, the son of former MLB pitcher Scott Sanders, is a native of Thibodaux, La., and transferred to LSU from Northwest Florida State Community College. Sanders was ranked as the No. 10 JUCO prospect in the nation by Perfect Game … he posted a 6-3 mark in 2017 for Northwest Florida State, recording 59 strikeouts in 43 innings … Sanders had a 10-4 career mark in junior college with 84 strikeouts in 64 innings.
• LSU defeated Notre Dame, 7-6, in the 2018 season opener on Friday, overcoming a 6-0 deficit entering the sixth inning … the Tigers erased their largest deficit to win a game since April 8, 2017, when they overcame a seven-run deficit to win at Arkansas.
• Senior outfielder/DH Beau Jordan was LSU’s leading hitter in last weekend’s Notre Dame series, batting .500 (4-for-8) with two doubles, two homers, two RBI and four runs scored … Jordan now has 10 career home runs.
• Junior catcher/first baseman Bryce Jordan hit his first career grand slam in the sixth inning of the Tigers’ win on Friday versus Notre Dame … the grand slam was the first by an LSU player since April 13, 2017, when Greg Deichmann hit one versus Ole Miss at Alex Box Stadium, Skip Bertman Field.
• Senior right-hander Austin Bain was the winning pitcher on Friday versus Notre Dame, as he blanked the Irish over the final two innings, allowing no hits, one walk and four strikeouts … Bain also collected his first career collegiate hit in his first career plate appearance, as he singled sharply as a pinch hitter in Sunday’s contest against Notre Dame.
• Sophomore right-hander Matthew Beck preceded Austin Bain as a reliever in Friday’s game against Notre Dame, and he delivered a superb performance, shutting out the Irish for 2.2 innings with one hit, no walks and a career-high five strikeouts.
• The paid attendance figure of 12,844 for Friday night’s LSU-Notre Dame contest was the largest in LSU Baseball history, and the paid attendance figure of 12,223 on Saturday was the sixth-largest in program annals.

ABOUT THE PRIVATEERS
• UNO opened the 2018 season with a 5-4 win over Illinois-Chicago on Friday before dropping a 6-3 decision to Alabama State on Saturday. The Privateers capped the weekend on Sunday with a 14-3 win over Southern. All three game were played at UNO’s Maestri Field; in fact, 12 of the first 13 games on the Privateers’ schedule are home contests.
• UNO will play Jackson State at 6:30 p.m. on Tuesday night at Maestri Field prior to the Privateers’ contest on Wednesday at LSU.
• Every Privateer got in the hit column in the season opener on Friday, as UNO collected 14 hits in a win over 2017 NCAA tournament participant Illinois-Chicago.
• Five starters made their Privateer debuts over the weekend: Beau Bratton (C), Collin Morrill (2B), Jacob McFadden (1B), J.T. Mauldin (OF), and Cody Ducote (DH). Ducote is a former LSU outfielder who earned a letter with the Tigers in 2016.