Tigers at Home Tuesday Looking For Win Over Vandy 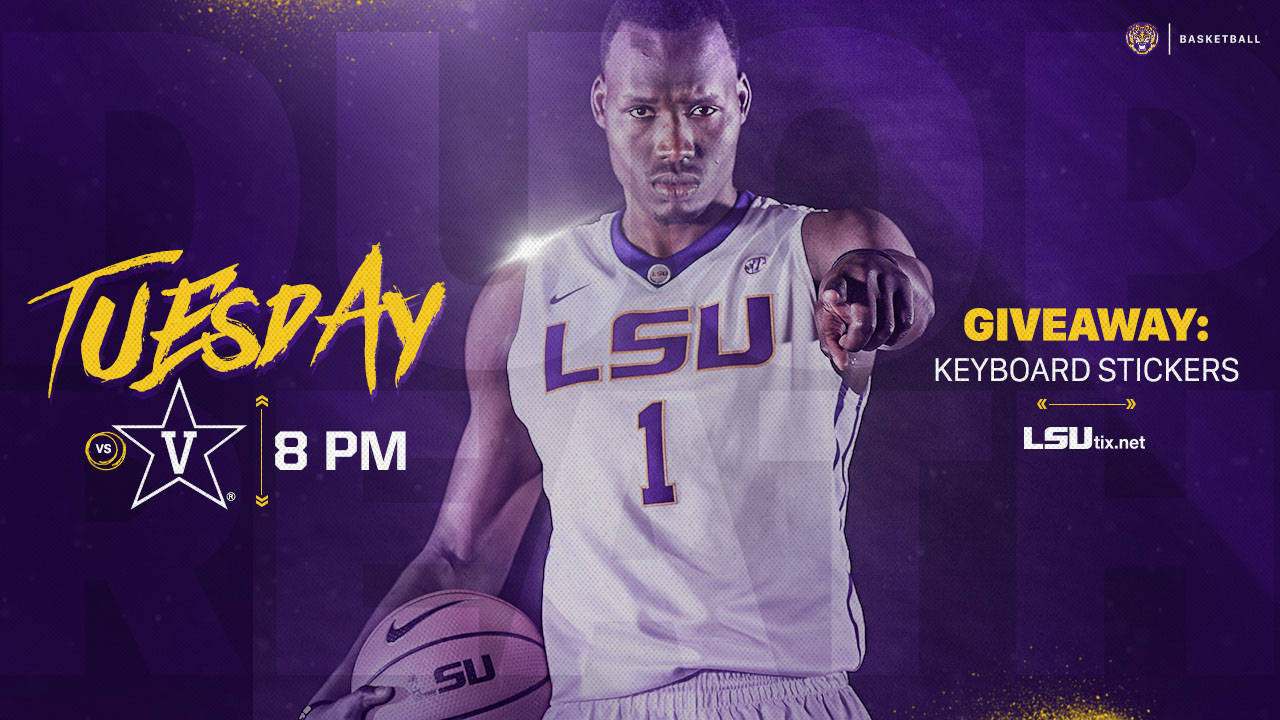 BATON ROUGE – The LSU Tigers, coming off a last minute 64-63 win over Missouri on Saturday afternoon before a lively crowd at the Pete Maravich Assembly Center, looks to make it five home straight Baton Rouge wins when it hosts Vanderbilt Tuesday night at 8 p.m.

The game is set for telecast on the SEC Network with Dave Neal and Daymeon Fishback on the call. Chris Blair and former head coach John Brady will have the call on the affiliates of the LSU Sports Radio Network (Eagle98.1 FM in Baton Rouge).

Tickets for the game are available during the day Tuesday at the LSU Athletics Ticket Office and online at LSUTix.net. Tickets will be on sale at the upper concourse ticket windows at the Maravich Center beginning at 6:30 p.m. LSU students are admitted free of charge with valid student ID. The popular duo, Quick Change, will be the halftime entertainment.

LSU enters the last two weeks of the season at 15-11 and 6-8 in the Southeastern Conference, in a tie for ninth with Georgia and Ole Miss, while Vanderbilt is 11-16 and tied with South Carolina for 12th in the league.

The Commodores beat the Tigers, 77-71, in the first meeting at Memorial Gymnasium in Nashville back on Jan. 20. In the game, Vandy had a 16-point lead with 16:54 to go in the second half before LSU rallied to take the lead with 2:21 to play. But Vandy answered down the stretch and LSU could not stay with them in the end.

Duop Reath led LSU with 31 points and 13 rebounds, while Skylar Mays was the only other Tiger in double figures with 13. Riley LaChance had 26 points and Jeff Roberson had 20 as Vandy shot over 50 percent. Bryce Drew is in his second year as head coach at Vanderbilt. He was born in Baton Rouge at the time his father, Homer, was an assistant coach for then LSU first-year coach Dale Brown in the mid-1970s.

Coach Will Wade met with the media prior to practice on Monday and here are some of his comments:

Opening Statement …
“We are getting ready for Vandy. They were more aggressive than us in the first game. That really hurt us. They shot 30 free throws, we shot 21. They made 20, we made 13. We were 13-of-21, they were 20-of-30. They were much more aggressive than us getting in the paint. Obviously (Jeff) Roberson is a major issue for us. A versatile four man that can shoot, pass, score in the post. Roberson and (Riley) LaChance had 46 of their 77 against us the first time. They clubbed us pretty good. We are going to need to play quite a bit better to give a chance this next time here. Hopefully we will play more aggressive and drive the ball and get to the foul line a little bit better than we did the first time against them.”

On what they did poorly against LaChance last time they played …
“We let him get to his right hand and drive us. We gave up an offensive rebound three. We lost him on a shake action three on a throwback where we over helped in on their five man rolling. We fouled him a couple times late on a ball-screen turndown. We fouled him and he hit two free throws. We did a poor job of having awareness on him. He is a very good player. It is not like we are the only team that they have scored 40 or 50 plus on. They did the same thing to Florida the other night, Roberson and LaChance. I didn’t think we put enough pressure on him. I didn’t think we were aggressive enough against him offensively or defensively. He is like Tre (Tremont Waters), when you let someone like him play at his own speed, they are going to be very effective, which he was the first game. Then Saben Lee came in and closed the game down for them. He did a great job driving us to the front of the rim.”

On Daryl Edwards giving the team energy …
“He just brings energy, toughness, and a winning mindset that we need. I think that is probably accurate. I don’t want to speak for all the guys, but I feel better when he is out there.”

On if Vanderbilt’s struggles on the road effects how they defend them …
“No. They had Kentucky beat. They played about as well as anybody at Auburn. Auburn could never close them out or put them away. I don’t think them playing on the road or them playing here has any effect on how we are going to play them. They have played well on the road. They just haven’t gotten the results. Let’s hope it doesn’t start tomorrow.”

On being successful on their home court …
“You should always own your home court, especially in league play. We haven’t done as good a job as we have needed to, but I think we have picked that up as of late. We are playing better at home. I think our guys are playing with a little bit more confidence at home. We changed up our routine. We changed some things up and I think that has contributed playing better and playing well.”

On keeping the players focused after a big win …
“We will see. I showed them the film yesterday. We made plenty of mistakes. It’s not like we were unbelievably attentive to every detail or played phenomenally. We still have a lot of things that we need to improve on if we are going to have a strong end of the season here. I think we will be ready to go. I wouldn’t see any reason why we wouldn’t be.”

On the fans coming out and supporting the team …
“I think they appreciate that the guys play hard. We are kind of duct tapped together a little bit right now. They are trying. They are trying really hard. Hopefully we can make our fans respect that.”

On what he hopes to accomplish the rest of the season …
“I wish we could be more consistent. That is what has hurt us. We wouldn’t need any of these conversations if we were a little more consistent. That doesn’t mean we are going to win every night. I would like to have a little consistency and jump off the roller coaster, and be straight line. That would be phenomenal. I think that would be good. That would help towards the other stuff too.”