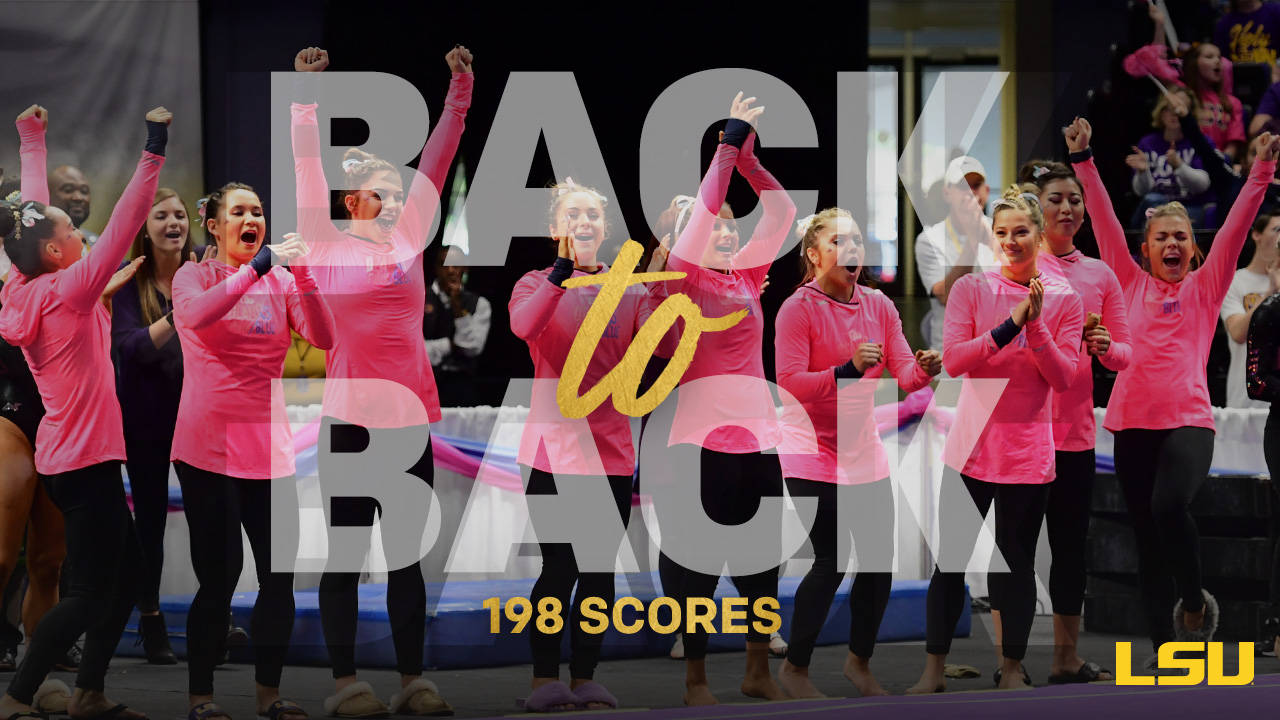 BATON ROUGE – In its second meet of the weekend, the fourth-ranked LSU gymnastics team posted a score of 198.175, the highest in the nation in 2018, to go back-to-back meets with a 198 or higher for the first time in school history Sunday afternoon at the Maravich Center.

The Tigers go BACK TO BACK 198 scores for the first time in SCHOOL HISTORY! #LSU defeats TWU with a score of 198.175. #LSUnstoppable pic.twitter.com/kBipRer0mm

The LSU bars squad, arguably the best in the nation, set the school record on the event with a 49.725 in the second rotation. The squad’s score marked the fifth best in the history of NCAA gymnastics and the best in the country since 2004.

It’s a new SCHOOL RECORD!!!! The Tigers LIGHT UP bars with a 49.725. #LSUnstoppable pic.twitter.com/hemj0MDms3

More than 11,000 fans watched the Tigers improve to 11- 1 on the season and extend the win streak inside the Maravich Center to 32. LSU extended its streak of meets with a 197 or higher to 30 and it is now the only team in the nation to score a 197 or better in every meet his season.

Sophomore Kennedi Edney took home the all-around title for the Tigers with a 39.625. Edney posted a career-high score of 9.95 on floor.

Edney Earns Second Vault Title of the Season
Senior Erin Macadaeg led off the first rotation with a season-best 9.875, and sophomore Ruby Harrold followed with a 9.85. In the third and fourth spots, Julianna Cannamela and Sarah Edwards each notched a 9.875, and Myia Hambrick recorded a 9.850. Edney anchored the first event with a booming 9.90, for her second vault title of the season and sixth career as the Tigers posted a 49.375.

Tigers Post School Record 49.725 on Bars
Three Tigers notched career highs to pave the way for a school record 49.725 on the uneven bars. LSU used a 9.90 from Edney in the fourth spot. Hambrick and Harrold posted career-best 9.950s, and junior Sarah Finnegan added a 9.950 to anchor the event. In the fifth spot, Lexie Priessman executed a phenomenal routine and earned the bars title with a career-best 9.975. The routine marked her 10th career uneven bars title and third of the season.

LSU Splits Beam Title Four Ways with 9.90s
LSU was consistent in the third rotation and notched 9.90s from Macadaeg, Hambrick, freshman Christina Desiderio and Finnegan as each took home a share of the beam title. Edney tacked on a 9.875 as LSU tallied a 49.475 in the third rotation.

Edney and Priessman Close Meet with Career High 9.95s
Edney and Priessman split the floor title with 9.95s to close the meet and propel the Tigers to their second-highest floor score of the season, 49.600. The scores by Edney and Priessman were each career highs, and sophomore Ashlyn Kirby also posted a career best in the third spot with a 9.925. LSU used an outstanding, season-best 9.90 from Harrold in the fourth spot and a 9.875 by Edwards.

Next Up
LSU travels to Stegman Coliseum on Friday, Feb. 23 for a meet against Southeastern Conference foe Georgia. The meet is set for 6 p.m. and will be televised by the SEC Network.