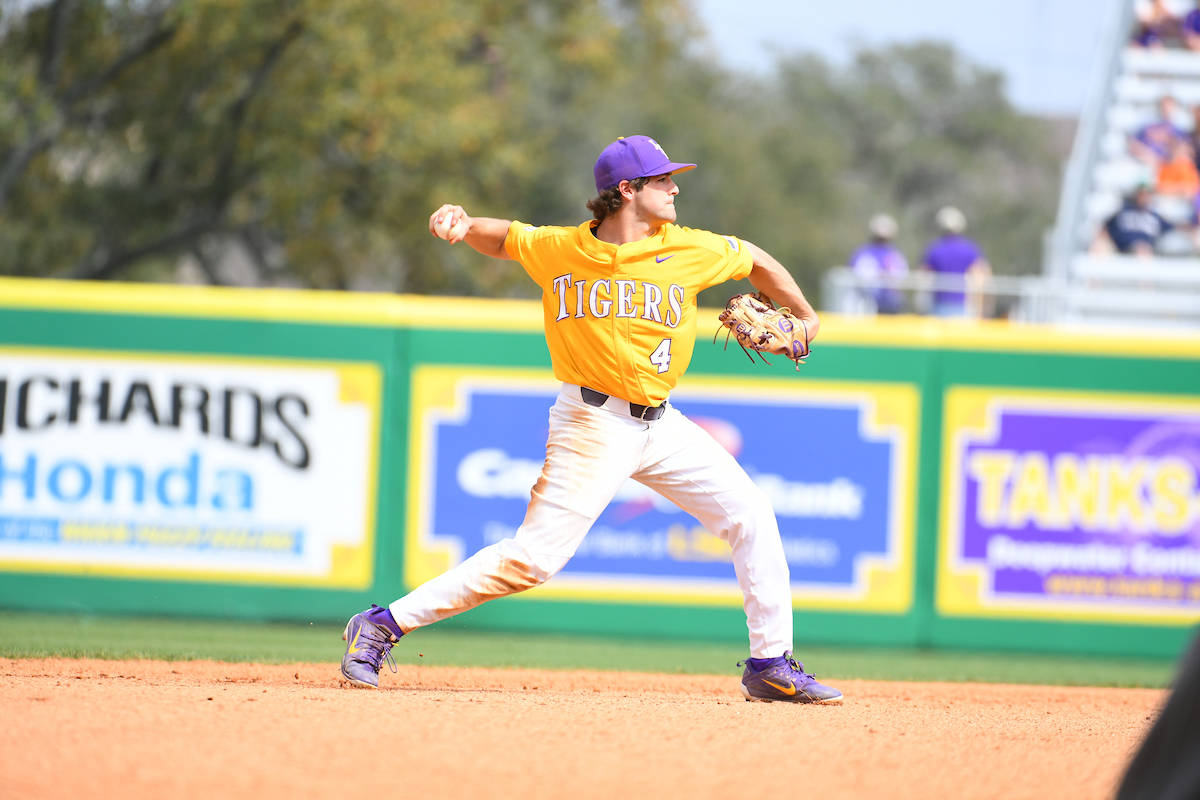 LSU will return to action on Wednesday when it plays host to New Orleans at 6:30 p.m. The game will be available on SECNetwork+, which is accessible through WatchESPN or the WatchESPN app.

“Notre Dame played great this weekend,” said LSU coach Paul Mainieri. “They played tremendous baseball in every phase of the game. We didn’t coach our team well enough, and there wasn’t one aspect of the series that I could point to and call an outstanding part of our game.

“We just have to get back to work and keep our confidence. We need to be very positive and know that this is a work in progress. We’ve got a lot of new guys, and there’s going to be some speed bumps along the way. Our guys just have to keep working through those moments, and we’ll get better.”

Right-hander Joe Boyle (1-0), who recorded the final out of the fifth inning, was credited with the win, and right-hander Andrew Belcik, who worked the final 2.1 innings, earned his first save of the  year.

LSU scored the first run of the game on a sacrifice fly from shortstop Josh Smith. The inning began with a single by catcher , followed by a walk from leftfielder Beau Jordan. Second baseman Brandt Broussard got a bunt down to sacrifice the runners on second and third with one out. Smith hit a deep fly to left field which allowed Bryce Jordan to cross the plate and give the Tigers and early lead.

The next half inning, Notre Dame answered. Second baseman Nick Podkul and designated hitter Niko Kavadas walked to set the stage for inning. On a 1-0 count, right fielder Eric Gilgenbach hit a three-run home run to right-centerfield to give Notre Dame a 3-1 lead.

Bryce Jordan led off the fifth inning with a double down the left field line and that was followed by a single from Broussard that squeezed under the outstretched glove of the third baseman. Cameron Brown then replaced Brian Morell on the mound and on his first pitch, Brown plunked Smith to load the bases for the Tigers. Nick Webre grounded into a double play, but that allowed Jordan to score and decrease the Tiger deficit to one run.

In the top of the sixth, Gilgenbach got a base hit and LSU reliever Daniel Cabrera walked the following batter, Daniel Jung. Devin Fontenot replaced Cabrera and, after a sacrifice which put runners on second and third for the Irish, centerfielder Spencer Myers drove them in with a single to right field.

Cole Daily doubled down the left field line in the following plate appearance which allowed Myers to score and extended the Irish lead to 6-2.

Beau Jordan led off the seventh inning for the Tigers and on the first pitch that he saw, he sent the ball into the left field bleachers for his second homer of the season, decreasing the Tigers’ deficit to three runs.

In the top of the ninth, Notre Dame loaded the bases for Gilgenbach, who hit a grand slam to left field to give him seven RBI on the day and his third homer of the weekend series.

“High into the air. A monster shot, no doubter.”@beaujordan24 with the homer to decrease the Tiger’s deficit to three runs.