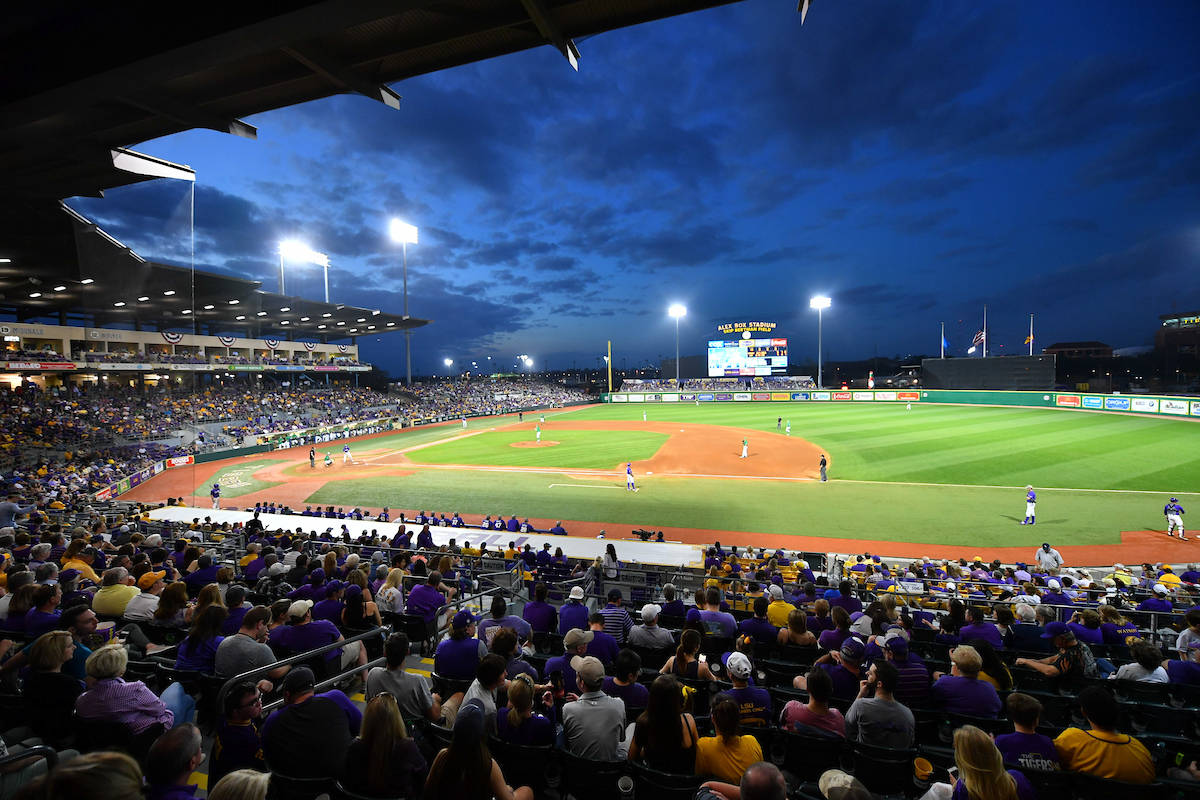 With the loss, the Tigers move to 1-1 on the season. Notre Dame picks up their first win of the season to bring them to 1-1.

The Tigers return to action on Sunday, February 17 for Game 3 of the series against Notre Dame. The rubber match of the series will take place at 11 a.m. tomorrow. The game will be available on the SECNetwork+, which is accessible through WatchESPN and the WatchESPN app.

Notre Dame starter Tommy Sheehan earned his first win of the season, pitching 5.0 innings and giving up 4 runs on 6 hits with 3 walks and 2 strikeouts. Right-handed pitcher Shane Combs entered the game in the top of the 6th inning in relief for the Irish walking two batters before leaving the game. Cole Kmet entered the game for Combs and sealed the game for the Irish earning his first save of the season. He gave up zero runs in 4 innings with one hit. He walked two batters and struck out three.

LSU’s Zack Hess started the game, and finished his first outing of the season suffering the loss after pitching 2.1 innings. The right-hander gave up eight runs on five hits with six walks and two strikeouts. Freshman right-hander Trent Vietmeier entered the game to pitch for the Tigers in the top of the third inning. He pitched 3.2 innings for the Tigers giving up no runs on two hits with no walks and four strikeouts. Freshman right-handed pitcher Ma’Khail Hilliard tossed a scoreless seventh and eighth innings giving up only 3 hits walking one and striking out two batters. Devin Fontenot came in to pitch the ninth inning for the Tigers. He gave up two runs on two hits.

After walking the bases loaded in the top of the first inning, Hess held Notre Dame to only one run.  Cole Daily came across the plate as designated hitter Niko Kavadas grounded out to first base. The Tigers were able to strand runners on second and third to limit the Irish to keep the score at 1-0.

Designated hitter, Beau Jordan, tied the game in the bottom of the second inning with a solo shot to left field. It was his first home run of the season and the ninth of his career.

Notre Dame put up five runs in the third inning. With the bases loaded after a single and two walks, Kavadas singled down the left field line to score two more runs for the Irish. Later in the inning, with Kavadas on second, rightfielder Eric Gilgenbach homered to left to bring the Notre Dame lead to 6-1.

With Vietmeier in to pitch for the Tigers, first baseman Daniel Jung tacked on another run on a sacrifice fly to left by Daily. After a single by left fielder Jake Johnson put runners on the corners, Nick Podkul singled up the middle to bring centerfielder Spencer Myers home.

In the bottom of the fourth inning, right fielder Antoine Duplantis was walked to start the inning. He later reached third as centerfielder Zach Watson singled through the left side. With runners on the corners, catcher Nick Coomes singled to right field to bring Duplantis across the plate. Later in the inning, second baseman Brandt Broussard earned the first hit of his career driving home two more runs to cut the Notre Dame lead to 8-4.

The Tigers cut into the lead again in the bottom of the sixth inning as Combs walked the first two batters he saw. Jake Slaughter flew out to centerfield advancing Coomes to third. Broussard flew out to right field bringing Coomes home for a run.

Notre Dame stretched their lead in the ninth inning as centerfielder Spencer Myers reached base on a single up the middle. He made his way around to third as Johnson was hit by a pitch. He later scored as Podkul doubled to left center scoring both baserunners.

Check back later for full recap.