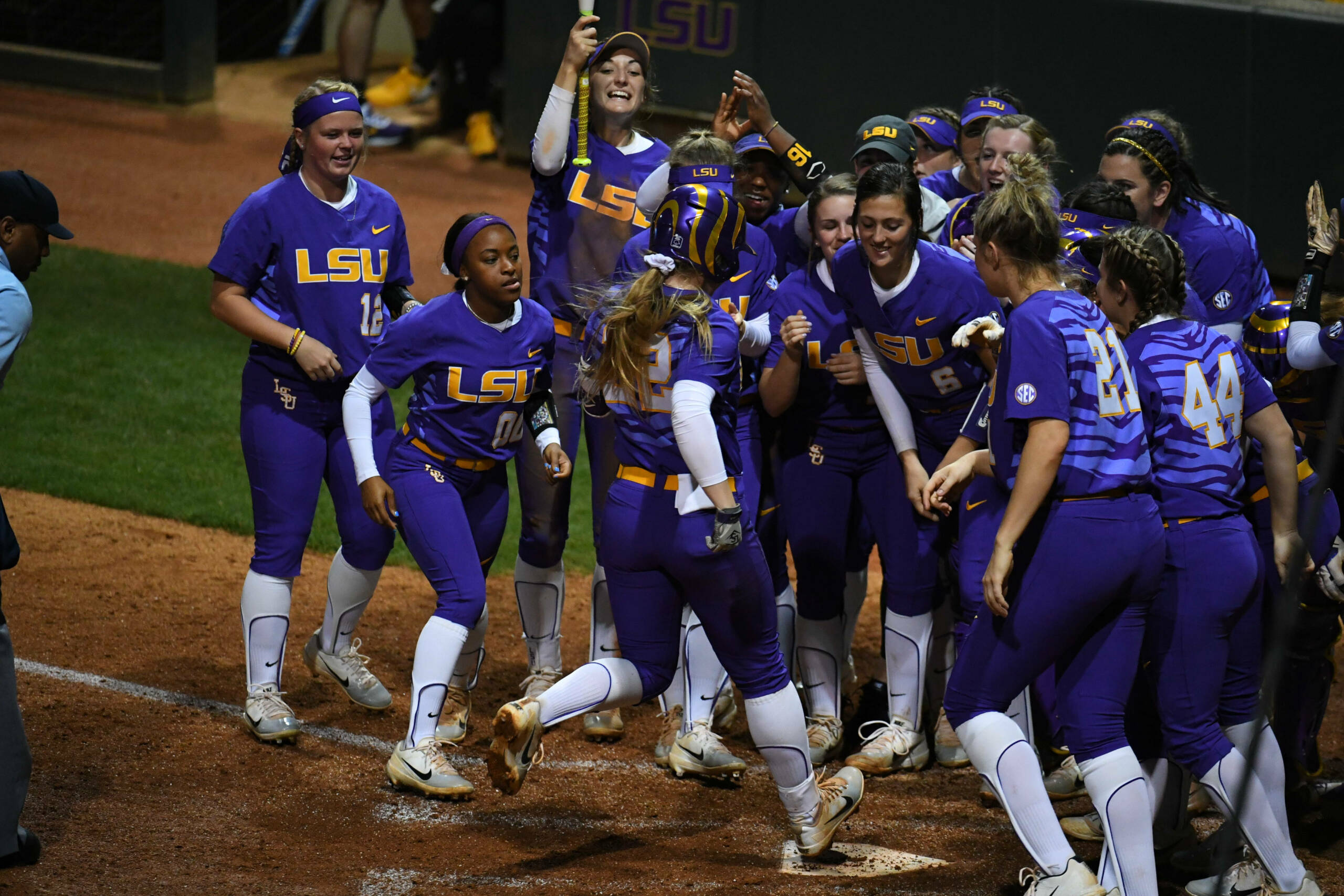 BATON ROUGE, La. – The seventh-ranked LSU softball team remains unbeated after run-ruling Southern Utah, 13-1, in game one and coming from behind to defeat Oregon State 3-2 in game two. The Tigers are 9-0 on the season, which is the best start to a season since 2015.

Aliyah Andrews led the Tigers at the plate with a .667 average on the day with four runs scored and six stolen bases. Amanda Doyle had five RBI on the day, including her first home run of the season.

Maribeth Gorsuch and Allie Walljasper both earned complete-game victories in the circle. It was the first win for Gorsuch and the fourth for Walljasper on the season.

Torina’s Thoughts
Opening statement…
“It’s really valuable being able to make two comebacks back-to-back today. It’s something that doesn’t show up in the stats. Talent and batting averages you can see, but understanding that your team knows how to fight is huge.”

On taking advantage of walks…
“They did a good job sticking to the plan and listening Coach Dobson. He gave them a really solid plan and they did a good job buying into it, watching the pitches well and doing everything that was asked of them today.”

On Amanda Doyle‘s five RBI today…
“These are back-to-back days she’s been pretty special for us. She had a really good day yesterday too. She’s a really special player, has been her whole life and will continue to be. I think she’s the next name that people are going to be asking in the next couple of years.”

Game 1
Gorsuch and the Tiger defense struggled to begin the game against the Thunderbirds, giving up a lead off double that eventually would score after an error and a sacrifice fly. LSU answered back in the bottom half of the inning after Andrews scored off of a Doyle sacrifice fly to tie up the game at one run a piece.

In the bottom of the third inning with two outs, the Tigers added three more runs off of a Shemiah Sanchez double to left field that scored Andrews. Doyle came to the plate with two out and launched a home run over the left field fence, giving the Tigers a 4-1 lead and Gorsuch comfort in the circle.

The bottom of the fourth inning was where the Tigers put the Tunderbirds away by scoring nine runs. Southern Utah issued five walks that gave the Tigers three-straight runs. Bases were loaded when Kara Goff came to the plate and recorded her first hit of her collegiate career, smashing a base-clearing double down the left field line.

After the first inning Gorsuch and the Tigers were extremely efficient and effective only giving up one more hit before run-ruling the Tunderbirds in the top of the fifth inning with a score of 13-1, and giving Gorsuch her first victory on the season in her first start.

Game 2
Oregon State came out hot in the first inning and scored two runs off starter Walljasper, putting the Tigers’ backs against the wall.

The Tiger offense once again chose the fourth inning to be their coming out party. Becca Schulte started things off with a walk. She advanced into scoring position with a Michaela Schlattman single and eventually scored on an error. Shemiah Sanchez would drive in Shlattman to tie the ball game at two, on a two-out single. Doyle would have the game-winning hit, a single to right center that scored Andrews to give the Tigers a 3-2 lead.

Allie Walljasper settled in in the circle and retired 15 of the final 17 batters faced and adding a fourth complete-game victory to Walljasper’s 2018 campaign.

Game Notes
>> The last time the Tigers opened the season with a 9-0 was in 2015 when the Tigers went on to have the best start in program history with a 25-0 record.

>> Amanda Doyle launched her first home run of the season and her fifth in her career.

>> Maribeth Gorsuch picked up her first victory on the season and fourth career victory.

>> Freshman Kara Goff ripped a shot down the left field line for three RBI, her first hit in a Tiger uniform.

>> Senior Allie Walljasper improved to 4-0 on the season and 49-14 in her career. She retired 15 of the last 17 batters of the game against Oregon State. It was fourth-complete game in 2018 and her 47th in her career.

>> Head coach Beth Torina is now 19 games away from winning her 300th victory at LSU.