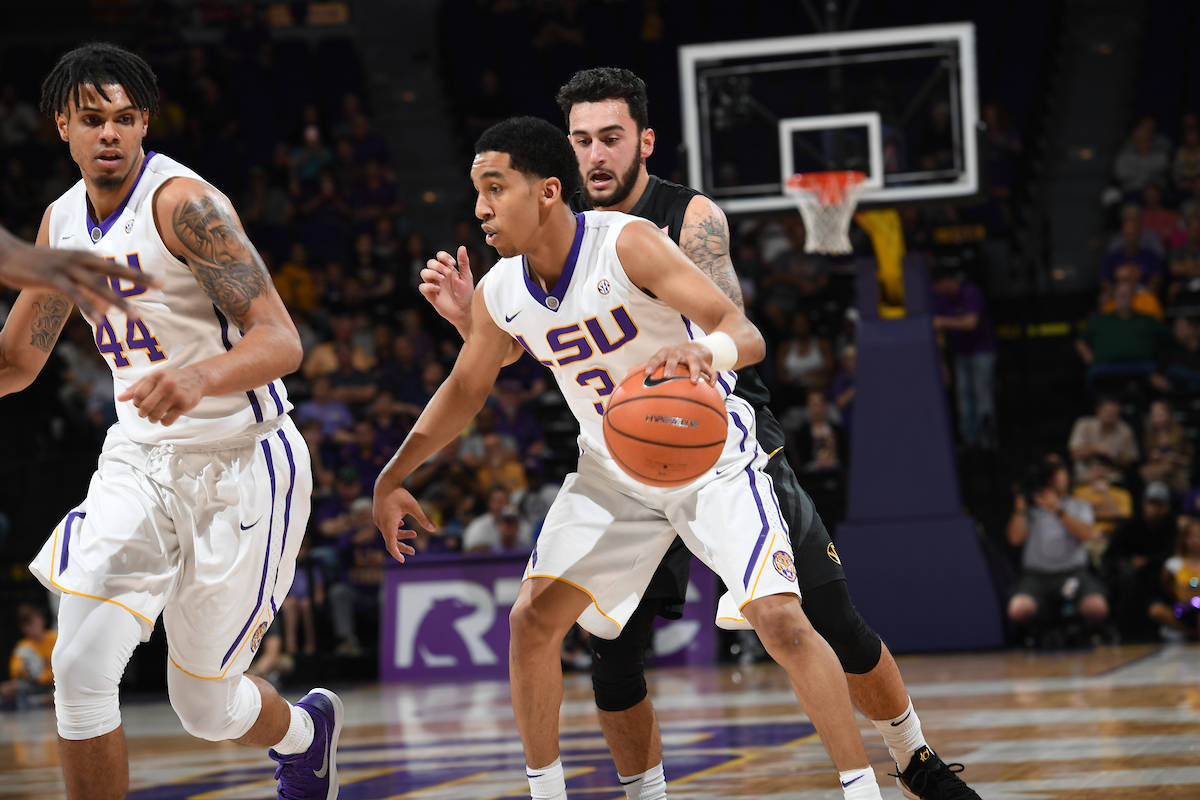 BATON ROUGE – Freshman Tremont Waters floater with 19 seconds remaining was the winning points in a 64-63 decision over Missouri Saturday afternoon at the Pete Maravich Assembly Center.

The win was the seventh of the year for the Tigers over a Top 50 NCAA RPI team. LSU has now won four straight at home and stands at 15-11 and 6-8 in the SEC with four games to play.

The Tigers also had to play defense after the Waters bucket as first Kassius Robertson was called for a charging foul with five seconds left for Mizzou. Daryl Edwards, who drew the foul, then had his inbounds pass tipped and Missouri missed a couple of short taps at the goal as time ran out.

Missouri entered the game tied for third at 8-5 with Florida and Alabama, but the Gators lost to Vanderbilt and Alabama lost to Kentucky. Throw in South Carolina’s win over league leading Auburn and Arkansas winning over A&M to make it four teams tied for third at 8-6, the last two weeks are going to be something to watch.

LSU and Missouri played the game everyone expected with neither team able to get more than a five point lead in a contest that featured 13 ties and 19 lead changes.

Up 36-33 at the half, LSU got its biggest lead of the game at the 16:21 mark after Edwards hit a trey and Waters a layup to make the LSU lead, 44-39. But Mizzou would have the lead less than three minutes later and that’s the way the game would wind down with both teams getting a little edge and the other coming right back.

Jontay Porter missed a jumper on the other end and Epps got the rebound to Waters. After looking for a transition bucket, Coach Will Wade called time out and drew up a play in which Waters was able to get the score setting up the final seconds.

The Tigers now must come back again on short rest and play on Tuesday night at 8 p.m. at the Maravich Center against surging Vanderbilt, winner of both games this past week. The game will be broadcast on the SEC Network and on the LSU Sports Radio Network. Tickets are available at LSUtix.net.

.@Tremonth2o HIGH off the glass for the WIN!! #BootUp #LSU pic.twitter.com/ipwKtRCcbZ

Opening Statement …
“Daryl Edwards made a winning play at the end there on the charge. Our execution on the inbound could have been better, not to make it dramatic. Missouri is a really good team. That is one of, if not the best team that we have beaten. They are physical, they are tough and obviously they make a lot of threes. It is a good win for us.”

On Daryl Edwards charge being an example of his toughness …
“He is tough. He is always on the winning team because he makes little plays like that.”

On rebounding the ball well tonight …
“I thought (Wayde) Sims did a good job blocking out. I thought Sims was pretty physical when he was in there. I thought he played well. When they went on their run in the second half, they got three offensive rebounds in a three or four-minute spurt. That is how they got their run going. They are so good. When they get inside, they kick that thing out for three and it is over. We had to limit their offensive rebounds. We did a good job ourselves.”
—

Opening statement…
“It’s a tough one. I thought LSU obviously did some good things, and they protected their home court. We didn’t play as a team in my opinion the first 10 or so minutes in the first half. We started to settle in a little bit in the second half. I thought we did a solid job defensively throughout, except down the stretch. Tremont (Waters) obviously made some big plays, and he’s a talented player. I give those guys credit, they got the win.”

His thoughts on their last possession…
“The one thing about the 1-3-1 zone that we talk about is that we need to get the ball to the corner. At that point, it becomes a 2-3 zone and that’s fine. We had a big guy around the rim. He had a good look at the basket and also had Jeremiah (Tilmon) to drop it off to. We just wanted to hit the top guy then get in the corner for a shot or a drive with one of our big guys. I thought we had decent looks at it, it just didn’t go. It was a charge and a good play by them defensively.”

On how well (Jordan) Barnett shot the ball tonight…
“I thought Barnett shot the ball really well tonight. He had great lift on his shot and confidence. He always shoots the ball with confidence. I thought (Jordan) Geist did a really good job of rebounding the ball and a really good job guarding Tremont. It’s not easy to get hit with those ball screens throughout the game. Obviously Tremont made two really good plays down the stretch, but I thought Geist did a good job of getting into the ball, making his looks tough.”

On what he thought went poorly to start the game…
“I think the communication on the defensive end wasn’t at the level that it could and should be. I think offensively, we were just doing some uncharacteristic things. We over dribbled which is not our strength, and I thought Jeremiah missed some layups that he normally makes. He’s not feeling well, but it’s still no excuse to miss layups around the rim. We just didn’t look like ourselves early in that first half.”

On what makes Tremont Waters so tough to guard…
“Well, he’s shifty, but he also has good teammates. He has guys that can make shots and bigs. Whenever you have bigs that can shoot trees, it stretches your defense out. You have to be sound to try and stop the ball but also to get back to the bigs that can shoot the ball. Of course he’s very talented, but he has good players which makes his job a lot easier because he has weapons on the floor.”

If LSU switching to the 1-3-1 zone surprised them…
“We obviously worked on their 1-3-1. One thing we said about it was that we needed to get it to the corners, then it plays like a 2-3 zone. I thought we had good lanes to drive, and Kassius came up short with the charge.”