Baseball Comes Back with Home Runs to Defeat Notre Dame 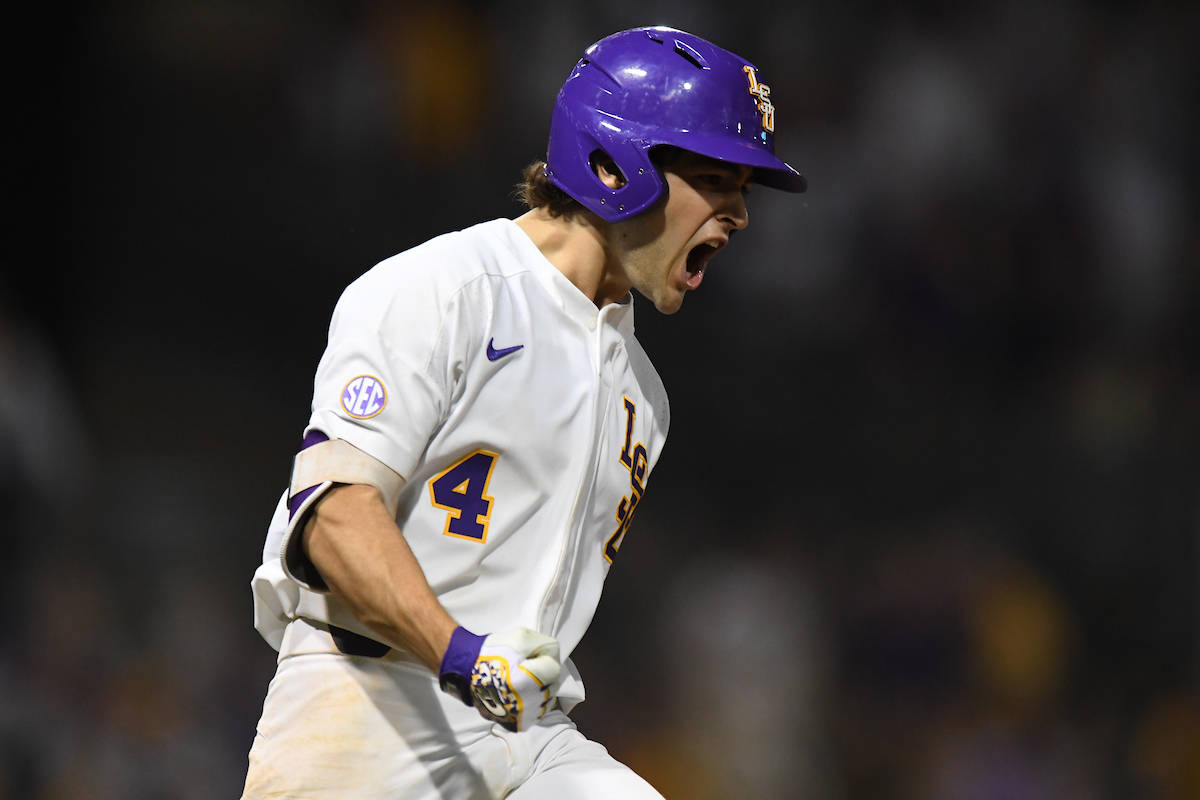 BATON ROUGE — The ninth-ranked LSU baseball team trailed Notre Dame, 6-0, after five innings but used a grand slam by Bryce Jordan in the sixth and a three-run blast by Josh Smith in the eighth to complete the comeback and defeat the Irish, 7-6, Friday night in Alex Box Stadium, Skip Bertman Field.

With the win, LSU (1-0) has now won 17 consecutive season openers dating back to the 2002 season while Notre Dame falls to 0-1. The comeback marked LSU’s largest since April 8, 2017, when it overcame a seven-run deficit to win at Arkansas.

Game 2 of the weekend series against Notre Dame is set for Saturday at 4 p.m. CT at Alex Box Stadium, Skip Bertman Field. The game will be available online only through the SEC Network+, which is accessible thorugh Watch ESPN and the Watch ESPN app.

Right-hander Zack Hess will get the start for the Tigers, and Notre Dame will start freshman southpaw Tommy Sheehan.

“The atmosphere was like a Super Regional tonight,” said LSU coach Paul Mainieri. “Unfortunately, we didn’t give that tremendous crowd much to cheer about for the first half of the game. I’m glad we were able to reward the fans for hanging in there with us.

“I don’t have any doubt that we’re going to play much better tomorrow. There’s a lot of pressure on our kids to perform in front of 12,000 people and with the expectations we have at LSU. I think our team will be more relaxed after getting through a tough season opener against a Notre Dame team that played extremely well. They had some great athletes and made all of the plays on defense.”

LSU’s bullpen dominated to aid the comeback. Sophomore Matthew Beck was the first Tiger out of the bullpen Friday night, and he fired 2.2 innings, limiting the Irish to one hit and struck out five.

Right-hander Austin Bain earned the win, improving to 1-0 on the season after entering to pitch the eighth. The senior dealt two no-hit innings, struck out four and walked one.

“We were down 6-0, but it actually could have been worse, and we got out of some big jams early,” Mainieri said. “Our kids hung in there and felt the Alex Box Stadium magic that makes you think you’re never out of it. It wasn’t exactly how you’d draw up a win, but I’m very proud of our team for earning a great comeback victory.”

Caleb Gilbert started the game for the Tigers. He allowed six runs, five earned, in 4.1 innings of work. The junior right-hander also struck out two.

Notre Dame took the early 1-0 lead in the top of the first. Shortstop Cole Daily led off with a single to centerfield, stole second and moved to third on a groundout. The junior then scored on an error to give the Irish the early advantage.

In the top of the third, Daily led off with a single and left fielder Jake Johnson got on base after being hit by a pitch. A passed ball moved the Irish to scoring position and second baseman Nick Podkul ripped a single to right field to drive in two runs as Notre Dame took the 3-0 lead.

The Irish tacked on two runs in the top of the fourth to extend its lead to 5-0. Right fielder Eric Gilgenbach led off with a double to centerfield and moved to third on a ground ball. With one out, Gilgenbach scored on catcher David LaManna’s single to right field. LaManna moved to third with two outs and scored on Daily’s infield single to shortstop.

Podkul reached after being hit by a pitch to lead off the top of the sixth inning, and he moved to second on an infield single. A sacrifice bunt moved the Irish into scoring position. With two outs, Podkul scored on a wild pitch to extend the Notre Dame lead to 6-0.

In the bottom of the sixth, right fielder Antoine Duplantis led off with a walk. Center fielder Zach Watson followed with a single, and left fielder Daniel Cabrera took a walk on four straight balls to load the bases for catcher Bryce Jordan. In his first game since the 2016 season, Jordan hit a moonshot over the left field wall for his first career grand slam to cut the Notre Dame lead to 6-4.

Jordan’s grand slam marked the first grand slam by the Tigers since Greg Deichmann hit one at The Box on April 13, 2017, against Ole Miss.

With one out in the bottom of the eighth inning, Beau Jordan doubled down the right field line. Junior Chris Reid entered to pinch hit and took a walk to set up Smith’s three-run blast as the Tigers grabbed the lead for the first time.

“You can pucker up and kiss that baby goodbye!” 👋👋👋@josh_smith8‘s three-run home run puts the Tigers ahead, 7-6, with two outs in the bottom of the eighth!

Would you look at that moonshot by @brycejordan200! What a beaut! LSU is within two in the bottom of the sixth at The Box!