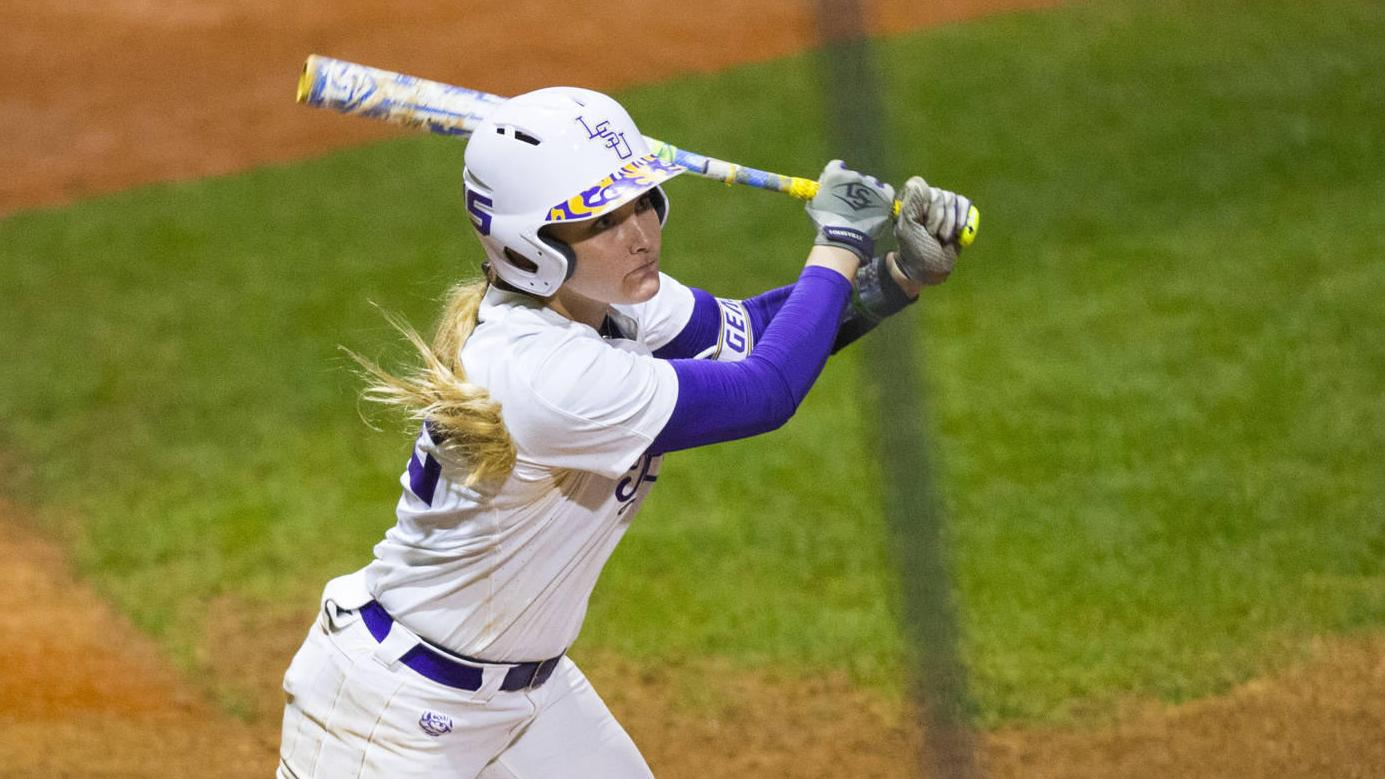 BATON ROUGE — The seventh-ranked LSU softball team won its twinbill Friday evening, defeating Central Arkansas 3-0 in game one and winning in walk-off fashion in nine innings against Louisiana Tech, 2-1. The Tigers improve to 7-0 on the year.

Sophomore Amanda Doyle led the Tigers on the day, finishing 5-for-7 with two doubles, three RBI and one run scored. Her highlight of the day came on a two-out walk-off single to defeat Louisiana Tech in game two.

Seniors Allie Walljasper and Carley Hoover both earned their third victories of the year. Walljasper threw a complete game, two-hit shutout against Central Arkansas in game one.

Game One
The Tigers opened up the scoring on the day in the second inning after Doyle doubled to left center and scored on a sacrifice fly by junior Amber Serrett.

LSU tacked on two more runs in the third inning, taking a 3-0 lead over Central Arkansas. Emily Griggs led off with a walk and Aliyah Andrews followed with an infield single. Griggs would come around to score on a sacrifice fly before Andrews, who would then score on Doyle’s single through the left side.

Walljasper continued to keep the Bears off balance, giving up two hits on the game. She retired 18-straight batters to end the game and finished with seven strikeouts.

Game Two
In game two, the Tigers got on the board first in the first inning. Griggs led off with a single down the left field line and came around to score on Doyle’s single to right field.

Hoover was strong in the circle through five innings, only giving up one hit. Louisiana Tech put together a run off two hits in the sixth to knot up the game at 1-1.

The Tigers had chances to end the game as they left 10 runners on throughout the course of the game. Doyle capitalized on a two-out situation with runners at second and third, putting the game-winner through the left side for her third RBI on the day.

Torina’s Thoughts
“I was proud of ourselves today. We had a great performance from both pitchers. Allie (Walljasper) was solid, as always, in the first game against UCA. Carley (Hoover) came out and really competed for us. It worked out well having Carley on the mound in the second game. She brings a lot of energy and life to us and that helped us. Amanda Doyle had an amazing day. She hit really well in both games. It was very fitting that she came through with the game winner.”

>> Seniors Walljasper and Hoover both improve to 3-0 on the year. They have now won a combined 106 wins in their careers.

>> Head Coach Beth Torina is now 21 games away from her 300th victory at LSU.

>> Hoover finished game two with eight strikeouts. She now has 31 in 21 innings of work.

>> LSU won its second game of the year against a Louisiana team. They are 18-0 against the Lady Techsters.

Next Up
LSU will continue the Purple & Gold Challenge on Saturday, taking on Southern Utah at 5 p.m. and Oregon State at 7:30 p.m. Fans can follow along via live stats by clicking here.