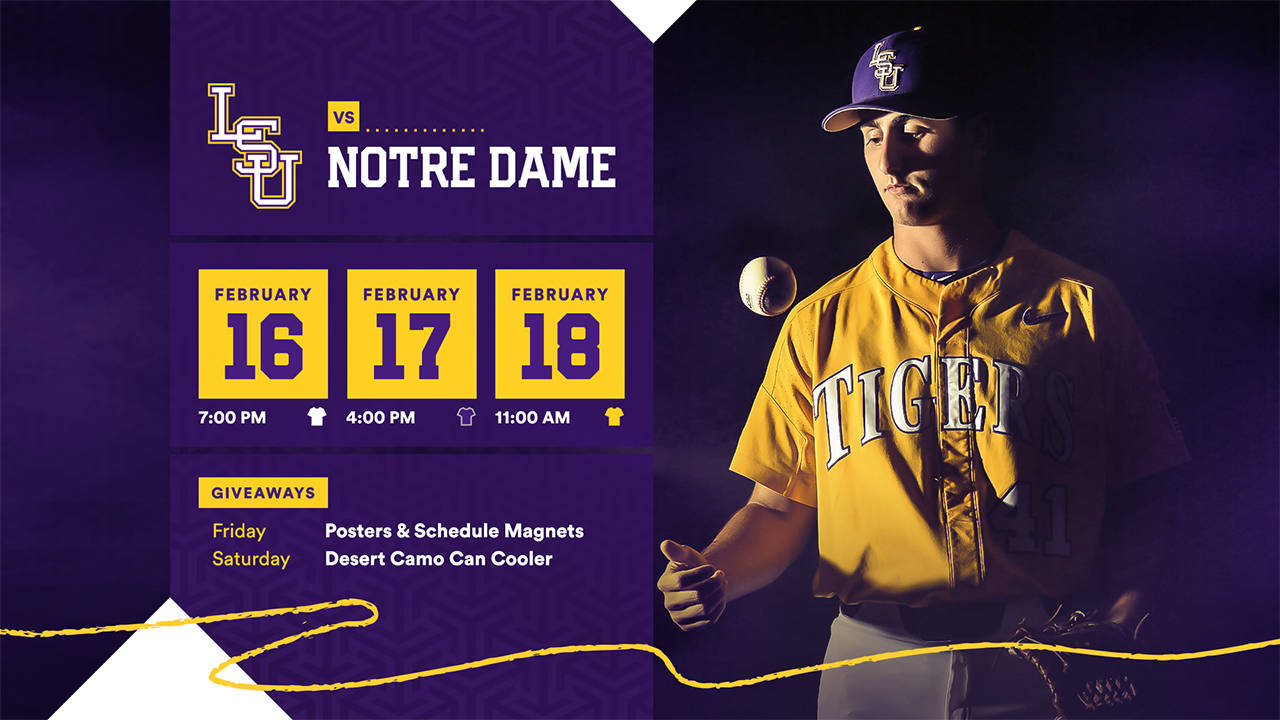 RANKINGS
LSU – No. 9 by USA Today; No. 10 by Collegiate Baseball
Notre Dame – unranked

ONLINE
All three games will appear on SEC Network+ and may be viewed at WatchESPN.com and the Watch ESPN app

SERIES RECORD
LSU leads the overall series with Notre Dame, 4-3, and the teams last met on May 11, 2016, in South Bend, Ind., where the Tigers posted a doubleheader sweep over the Irish (1-0 in 11 innings and 3-2 in 7 innings). Notre Dame, however, has a 3-2 advantage in the five meetings in Baton Rouge, including a 7-1 victory on March 11, 2012, which was the Irish’s most recent visit to Alex Box Stadium, Skip Bertman Field.

QUOTING PAUL MAINIERI
“There is nothing quite like the feeling of Opening Day in our stadium in front of our passionate fans. Every year, the anxiety of not knowing what the new season holds keeps me young. In the preseason polls we are rated anywhere between No. 9 and No. 17, but we realize you earn what you get on the field, not on paper. I think there’s a wide range of what people might think about our team this year because of the newness of our team, but our expectation will be, as it always is at LSU, to have our team in position to play for championships at the end of the year.”

ABOUT THE TIGERS
• LSU coach Paul Mainieri was the head coach at Notre Dame from 1995-2006, posting a 533-213-3 (.714) record in 12 seasons with a College World Series appearance in 2002. Now in his 36th season overall as a college head coach, Mainieri has a 2-5 mark in games against Notre Dame, including a 2-1 record against the Irish since he’s been at LSU (2007-present).
• Mainieri begins his 12th season at LSU with a record 512-202-3 (.716) at the school. He has directed the Tigers to the 2009 National Championship, five College World Series appearances, seven NCAA Regional titles, four SEC regular-season titles, six SEC Western Division championships and six SEC Tournament titles.
• LSU is the nation’s leader in wins (301) over the past six years, and the Tigers are the only team in the country to have earned an NCAA Tournament National Seed in each of the last six seasons (2012-17). Last season, the Tigers posted a 52-20 record and won five separate championships – the SEC regular-season title, the SEC Tournament title, the SEC Western Division championship, an NCAA Regional title and an NCAA Super Regional championship. The Tigers advanced all the way to the College World Series Finals and finished as the 2017 national runners-up.
• LSU returns six players who filled everyday starting roles on last season’s College World Series runners-up team, including junior outfielder Antoine Duplantis, sophomore outfielder Zach Watson, sophomore shortstop Josh Smith, senior outfielder/DH Beau Jordan, sophomore third baseman Jake Slaughter and senior catcher/first baseman Nick Coomes. The Tigers are bolstered by the return of junior first baseman/catcher Bryce Jordan, a 2016 All-SEC designated hitter that missed the 2017 season due to a knee injury, and junior infielder Chris Reid is another returning player with starting experience.
• On the mound, LSU will have to replace its entire weekend starting pitching rotation as Alex Lange and Jared Poche’ have moved on to professional baseball , and right-hander Eric Walker, a 2017 Freshman All-American, will be sidelined in 2018 after undergoing Tommy John surgery. Junior right-hander Caleb Gilbert (7-1, 2.16 ERA in 2017) and sophomore right-hander Zack Hess (7-1, 3.12 ERA, four saves in 2017) are the top returning members of the LSU staff, which also includes veteran pitchers Austin Bain, Nick Bush, Matthew Beck, Todd Peterson and Will Reese.
• LSU has won 16 straight season openers; the Tigers’ last loss in a season opener came on February 10, 2001, vs. Kansas State by a 9-8 score in Baton Rouge.

ABOUT THE IRISH
• Notre Dame posted a 26-32 mark in 2017, and the Irish finished with a 10-20 record in Atlantic Coast Conference games. Notre Dame hit .250 as a team last season with 32 home runs, while its pitching staff compiled a 4.45 ERA with 452 strikeouts in 518 innings.
• Notre Dame enters its 122nd season and eighth season under head coach Mik Aoki. In his career at Notre Dame, Aoki owns a record of 200-193-1. The Irish will work toward their 23rd NCAA Regional appearance and first since 2015.
• Junior outfielder Matt Vierling led the Irish in batting average in 2017, hitting .330 with seven homers and 42 RBI.
• Irish graduate student and Friday’s starting pitcher Scott Tully is the longest-tenured player on the Notre Dame roster. Over the last four years, he has gone 7-6 with a 3.88 ERA