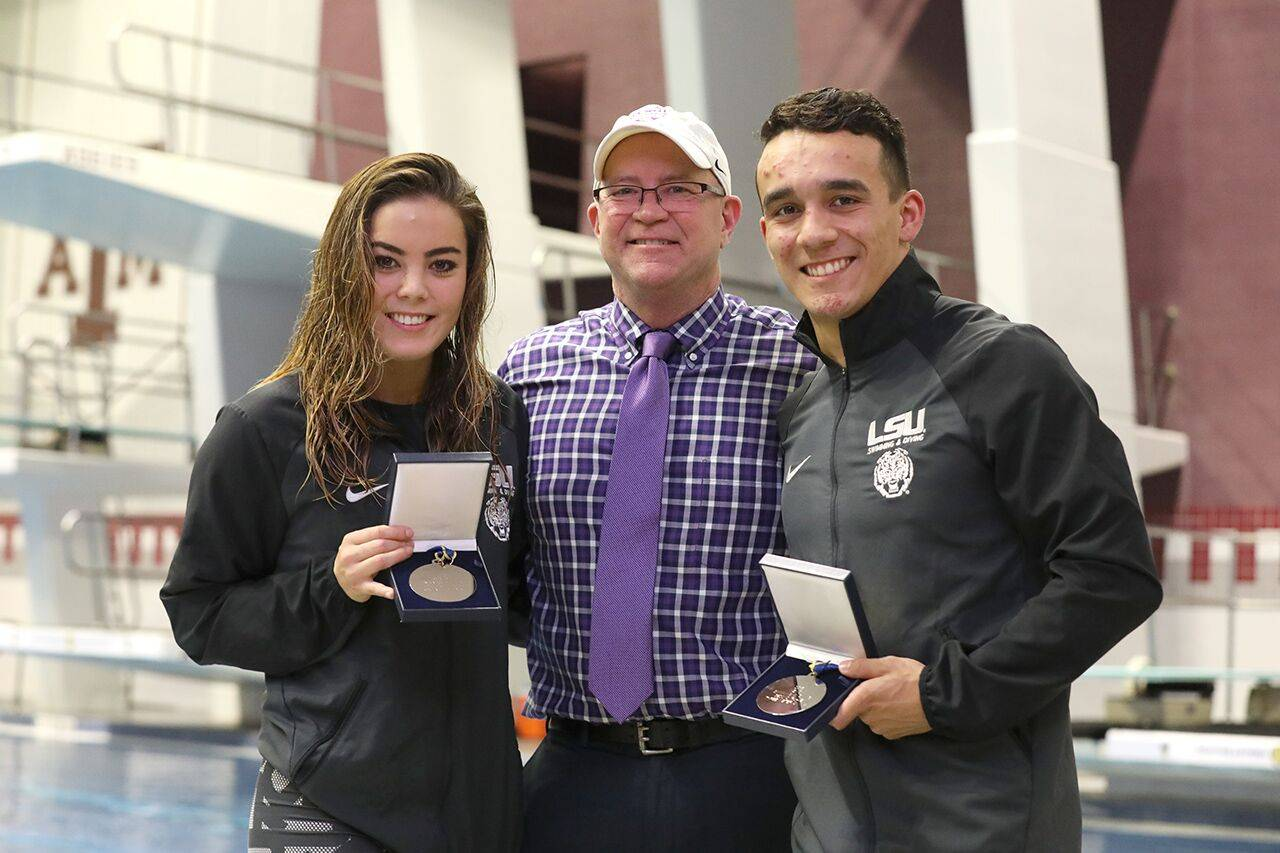 COLLEGE STATION, Texas – On a day that consisted of only six events, the LSU swimming and diving team came away from Day One of the SEC Championships with two silver medals courtesy of junior Lizzie Cui and sophomore Juan Celaya-Hernandez.

“It’s a good start,” explained LSU diving coach Doug Shaffer. “Anytime you compete against elite competition contending for titles, we’re where we want to be. From a development standpoint, today was good looking forward.”

The first finals of the SEC Championships was the women’s one-meter springboard, where Lizzie Cui took second in both the prelims and the finals.

In the prelims, Cui finished with a score of 315.40, just 1.10 points behind South Carolina’s Julia Vincent, earning to right to dive seventh in the eight-woman finals.

In the finals, Cui found herself in fifth place at the halfway point, but rallied in the back-half of the finals to take second with a score of 330.00, scoring at least a 55.00 on each of her last four dives, and earning a season-high score.

“I told Lizzie right before the contest if she knew the story about ‘The Tortoise and the Hare’, and she told me she did,” Shaffer said. “I told her to treat the competition like the tortoise; slow, steady, and focused. Focus on one dive at a time and run your own race.”

Juan Celaya-Hernandez, the Mexico native, started the day strong, winning the men’s three-meter springboard prelims with a score of 440.05 and by a margin of 14.65 points.

In the finals, Celaya-Hernandez had an equally impressive comeback as Cui. Celaya-Hernandez found himself in 7th place after the first round of dives, but slowly recovered to match Cui with the second silver medal of the day, scoring a 428.75.

“For Juan’s level of performance, he did two at a high level,” said Shaffer. “Although he got silver, he did leave some points on the board. He was a little off on a number of rounds, but I don’t necessarily mind that. He’ll continue to sharpen up as the meet progresses.”

The swimming team only had four events on the day, with both the men and women competing in the 200-yard medley relay and 800-yard freestyle relay. All four relays finished in 10th place.

“We just fell short of what our expectations were for the first day,” said LSU swimming coach Dave Geyer. “The training and preparation was what was needed, but the execution was just off today. We have a lot of swimmers that haven’t been on relays at SEC’s, let alone the first night, so there were definitely some nerves in play, especially for the three freshmen that raced today. Hopefully those who raced today got those jitters out of them and can be better prepared leading into tomorrow.”

The women teams consisted of eight different Tigers. Grace Horton, Sumer Spradley, Helen Grossman, and Haylee Knight, combined in the 200 medley relay to finish with a time of 1:39.98, while Tennyson Henry, Kit Hanley, Ellie Baldwin, and Jane MacDougall worked together to achieve a time of 7:18.91 in the 800 free relay.

Along with today’s races, the 2017-18 SEC Community Service Team was announced. Jane MacDougall and Thomas Smith both made the teams.

MacDougall is a certified Special Olympics coach, and coaches kids with disabilities every week. Thomas Smith is involved with Banana Bread Books, a startup company that aims to give back to the Baton Rouge community through the sale of banana bread. Smith also reads to children at University Terrace Elementary School.

Day Two of the SEC Championships starts tomorrow at 10 a.m. with the 500 freestyle prelims.