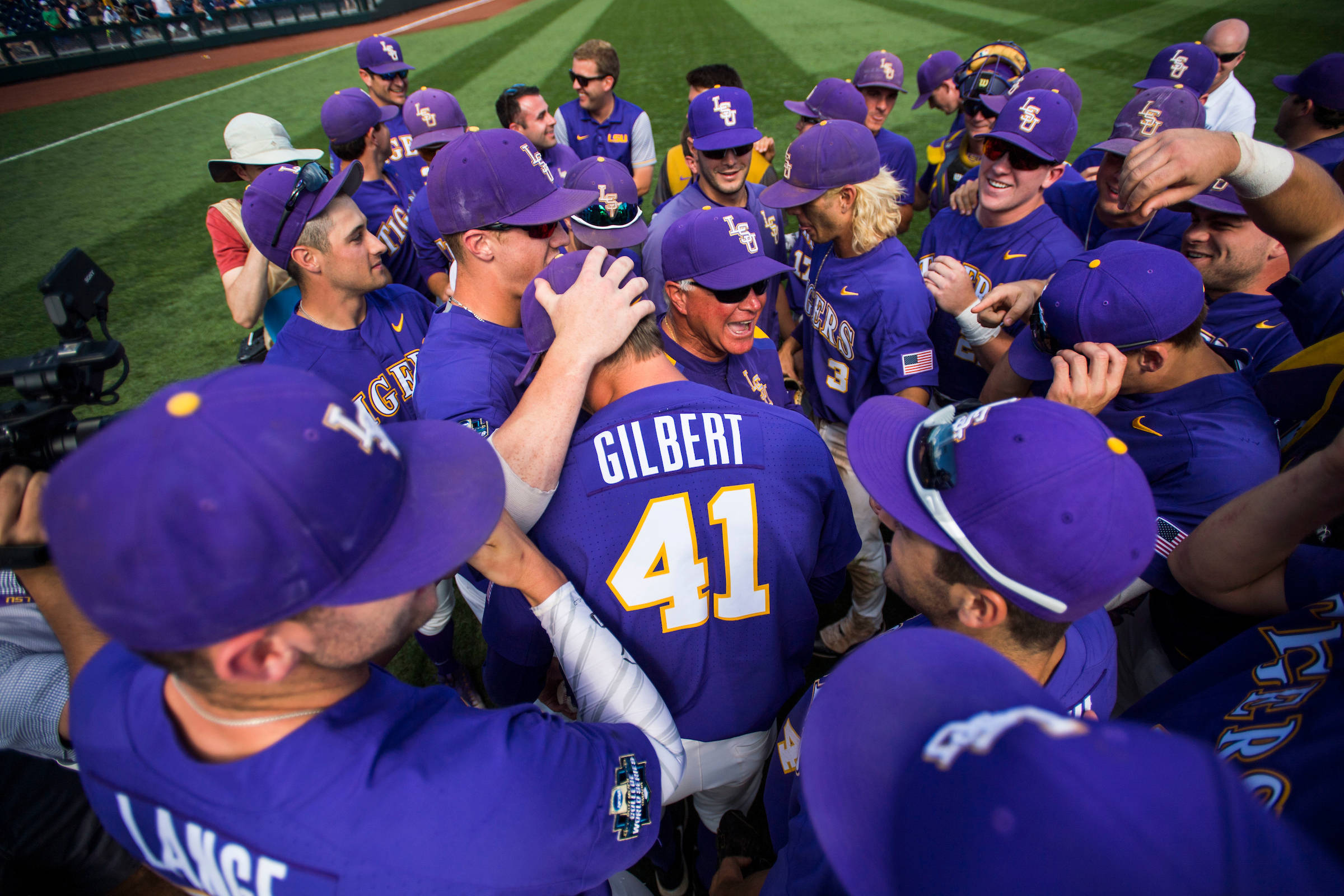 LSU is ranked as high as No. 9 in the 2018 preseason polls, marking the seventh straight year the Tigers will begin the year among the Top 10 teams in the nation. LSU coach Paul Mainieri, a four-time National Coach of the Year, welcomes the expectations and challenges assigned to a preseason Top 10 club.

“To see ‘LSU’ as the ninth-ranked team in the country going into the season is exciting, however, we are not satisfied with that ranking. It just means we only have eight spots to go to get to where we want to be, which is No. 1,” said Mainieri, who has directed the Tigers to one national championship, five College World Series appearances, four SEC overall titles, six SEC division titles and six SEC tournament championships in 11 seasons. “We realize that nothing will be handed to us. It will take an unbelievable amount of hustle and hard work, a tough attitude, unwavering confidence, and clutch play for us to achieve our goals.”

LSU is the nation’s leader in wins (301) over the past six years, and the Tigers are the only team in the country to have earned an NCAA Tournament National Seed in each of the last six seasons (2012-17). Last season, the Tigers won five separate championships – the SEC regular-season title, the SEC Tournament title, the SEC Western Division championship, an NCAA Regional title and an NCAA Super Regional championship. The Tigers advanced all the way to the College World Series Finals and finished as the 2017 national runners-up.

Mainieri is eager to mold the 2018 club into another national championship contender.

“This will be a unique season for us in the sense that if you have a 32-man roster with 17 new players, literally more than half of your entire roster will be brand new,” Mainieri explained. “We have a lot of work to do, and we won’t enter the season as highly-touted as we were last year. I feel very confident about this group, though, and I’m really looking forward to working with them.”

On the mound, LSU will have to replace its entire weekend starting pitching rotation as Alex Lange and Jared Poche’ have moved on to professional baseball , and right-hander Eric Walker, a 2017 Freshman All-American, will be sidelined in 2018 after undergoing Tommy John surgery.

“With 11 new pitchers and two new catchers on the roster, our two biggest priorities going are determining who will fill roles on the mound and behind the plate,” Mainieri said. “Our expectation will be, as it always is at LSU, to have our team in position to play for championships at the end of the year.”

The LSU outfield is led by junior rightfielder Antoine Duplantis, who begins his third season in the Tigers’ starting lineup. The Lafayette, La., native, batted .316 (90-for-285) last season with 14 doubles, two triples, two homers, 61 RBI, 50 runs and 19 stolen bases. He was named to the 2017 College World Series All-Tournament Team and to the SEC All-Tournament Team, and he was LSU’s leading hitter in the Tigers’ 16 postseason games, batting .333 (22-for-66) with three doubles, one homer, 13 RBI, nine runs and three steals. Duplantis finished No. 2 in the SEC in stolen bases with 19, No. 4 in base hits with 90 and No. 8 in RBI with 61.

Sophomore Zach Watson returns as the Tigers’ starting centerfielder after a stellar freshman season in which he batted a team-best .317 (70-for-221) with nine doubles, three triples, nine homers, 37 RBI, 42 runs and 12 stolen bases. Watson, a Freshman All-American, was LSU’s leading hitter in NCAA Tournament games, batting .333 (16-for-48) with one double, five homers, 10 RBI, 12 runs and four steals. He was voted to the 2017 College World Series All-Tournament squad after batting .346 (9-for-26) in seven games with one double, one homer, two RBI, five runs and two steals

Senior Beau Jordan, who has started 111 games as an outfielder/DH over the past two seasons, will contend for significant playing time. He batted .268 (45-for-168) last season with seven doubles, four homers, 29 RBI and 30 runs and provided four hits in the College World Series, including one double, one homer and four RBI. Jordan’s CWS home run – a solo shot – came in LSU’s 6-1 semifinal win over Oregon State, a game in which he also doubled and scored two runs.

Freshman Nick Webre, a product of Teurlings Catholic High School in Lafayette, La., should also make an impact in the outfield after a productive summer in the Prospect Collegiate League, where he hit 324 (58-for-179) with nine doubles, nine homers, 40 RBI, 47 runs and 20 stolen bases.

Sophomore Josh Smith, who earned Freshman All-America honors last season at third base, takes over the starting shortstop role in 2018. Smith, a member of the SEC All-Defensive Team, batted .281 (68-for-242) on the year with 16 doubles, five homers, 52 runs, 48 RBI and five steals. He collected five hits in the College World Series, including one double, one homer, three runs and five RBI.

Sophomore Jake Slaughter, who started 40 games at first base in 2017, will move to third base this season. Slaughter batted 257 (38-for-148) last year with five doubles, three homers, 26 RBI, 22 runs and two stolen bases … He started four games in the College World Series and launched a three-run CWS homer versus Florida State in the Tigers’ 7-4 win over the Seminoles.

Junior Bryce Jordan, who had to miss all of the 2017 season due to a knee injury, returns this season as the top contender for the starting job at first base. Jordan was a 2016 first-team all-SEC selection at designated hitter after batting .293 (55-for-188) with seven doubles, five homers, 33 RBI and 40 runs. He batted .333 (28-for-84) in SEC regular-season games with three doubles, four homers, 14 RBI and 18 runs, and he led the SEC in hit-by-pitch as he was struck 23 times.

Junior Brandt Broussard, a Baton Rouge native and a transfer from Delgado Community College in New Orleans, will likely begin the season as the starter at second base. Broussard, the son of LSU’s 1986 CWS second baseman Burke Broussard, batted .429 with two home runs, 16 doubles, three triples and 15 stolen bases with a .531 on-base percentage last season at Delgado while committing only six errors during the year.

Excellent infield depth will be provided by junior Chris Reid, who has 50 career starts at LSU, and by freshman Hal Hughes, a product of Norman (Okla.) North High School.

Junior right-hander Caleb Gilbert enters the season as the top candidate for the No. 1 weekend starting role. He appeared in 28 games (five starts) last season, posting a 7-1 mark and a 2.16 ERA in 58.1 innings with 12 walks, 67 strikeouts and a .190 opponent batting average. In his last 12 appearances of 2017, Gilbert was 5-0 with a 0.84 ERA in 32.2 innings while allowing three earned runs on 17 hits with seven walks and 36 strikeouts. He recorded a 4-0 mark and a 0.77 ERA in LSU’s postseason games (five appearances, two starts), allowing just two earned runs in 23.1 innings with five walks and 26 strikeouts.

Gilbert is expected to be joined in the weekend rotation by sophomore right-hander Zack Hess, a 2017 Freshman All-American. Hess made a team-high 30 appearances (six starts) on the mound in 2017, posting a 7-1 record and a 3.12 ERA in 60.2 innings with 30 walks, 83 strikeouts, four saves and a .182 opponent batting average. He worked the first two months of the season as the Tigers’ mid-week starter, but moved to the bullpen in early April. Hess pitched brilliantly in the 2017 College World Series as a reliever, appearing in five of the Tigers’ seven games while recording three saves and 11 strikeouts in seven innings.

Sophomore right-hander Todd Peterson is a candidate for the No. 3 position in the weekend starting rotation. Peterson appeared in 22 games (three starts) last season, posting a 3-1 mark and a 4.19 ERA in 34.1 innings with 16 walks and 21 strikeouts. He defeated Northwestern State on May 16 in his final start of the season, allowing just one run on four hits in five innings with six strikeouts.

Another strong contender for a weekend or mid-week starting role is junior right-hander Cam Sanders, the son of former Major League pitcher Scott Sanders. Cam Sanders was a 2017 MLB Draft selection by the San Diego Padres, and he recorded 59 strikeouts in 43 innings last season at Northwest Florida State College.

Freshmen right-handers Devin Fontenot and Ma’Khail Hilliard impressed the LSU staff during fall practice and could play significant relief roles this season. Fontenot, a product of The Woodlands, Texas, fired 207.2 innings in his career high school career, recording a 2.99 ERA with 57 walks and 265 strikeouts. Hilliard was the 2017 Baton Rouge Metro Area Player of the Year after leading Central High School to the Class 5A state championship.

LSU should also receive bullpen support from sophomore left-hander Nick Bush, who recorded 23 relief appearances last season, posting a 1-1 mark and a 3.75 ERA in 24.0 innings with 19 walks and 22 strikeouts. Senior right-hander Austin Bain is another accomplished reliever who has 120 strikeouts in 108.2 LSU career innings.

Freshman left-hander Daniel Cabrera, also the Tigers’ projected starter in left field, should contend for mound appearances, as will freshman right-handers AJ Labas and Nick Storz, both MLB Draft selections that were affected by injuries in the fall.

Sophomore right-handers Matthew Beck and Will Reese will lend veteran depth to the LSU staff.