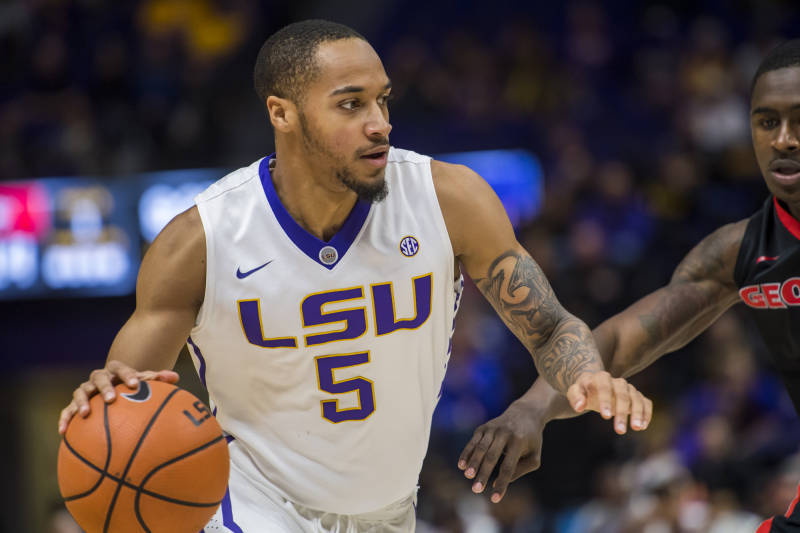 TUSCALOOSA, Alabama – The LSU men’s basketball team could not find the answers to sustain a drive that got them back to within one point of the Alabama Crimson Tide early in the second half before Alabama was able to put together an 80-65 decision Tuesday night here at Coleman Coliseum.

The loss drops LSU to 14-11 overall and 5-8 in the league heading into the first of two straight home games for the Tigers (Saturday vs. Mizzou, Tuesday vs. Vandy), while Alabama is now 17-9 and 8-5 in the league.

Daryl Edwards got hot late in the game and had 21 points, hitting 8-of-10 field goals, including all three three-point attempts, while Skylar Mays was also in double figures for the Tigers with 13 points. The Tigers for the game shot just 39.3 percent (22-of-56) and 9-of-23 at the arc. Donta Hall had a big game with 20 points for the Crimson Tide, while Collin Sexton, despite foul trouble, had 15 points, Braxton Key added 12 and John Petty 11.

Alabama won the opening tip and Dazon Ingram hit a three 25-seconds in to give Alabama the lead for good at 3-0. The Tide opened the lead to as much as 13 at the 5:27 mark before LSU on an 8-1 run cut the Tide lead to 36-30 with 2:48 to go before intermission. In the run, Edwards hit a jump shot, Mays had two free throws and Brandon Sampson had a three-pointer.

But LSU could not take advantage of two turnovers and a blocked shot by Duop Reath at the rim as Aaron Epps missed a three, Reath missed a jumper and Sampson was called for a charge.

John Petty then hit a three with less than a minute to go in the first half and Alabama led it, 39-30, at the break.

Out of the dressing room, LSU was able to get a three from Reath to get it back to a six-point, 39-33, game. Tremont Waters and Sexton traded some points and then Mays hit a three from the corner and he was fouled, leading to the rare four-point play that brought LSU back to 45-44 with 17:46 to play.

Again, the Tigers couldn’t capitalize on the situation, as after a miss by Sexton, LSU throws its next possession out-of-bounds on an air mailed pass. After a miss by Alabama, Mays drives in a layup and Hall blocked that shot. Reath got the offensive board and the dunk attempt did not stay down and Alabama got the rebound.

Sexton converted on the other end with a three and that was the start of a 10-0 run before an Edward three-pointer with 12 minutes left that made the Alabama lead eight, 55-47. But from there, the Tide took off again on a 16-point run that put the Tide up, 71-47, with 7:14 to play. In all it was a 26-3 run from when LSU couldn’t score after cutting the game to one point.

The Tide’s biggest lead was 25 points at 74-49 before the Tigers converted at the end to get the margin down to 15 at the buzzer.
—
A reminder that the Will Wade Radio Show will air this week only tonight (Feb. 14) at 7 p.m. from TJ Ribs on Acadiana Thruway and on the affiliates of the LSU Sports Radio Network.