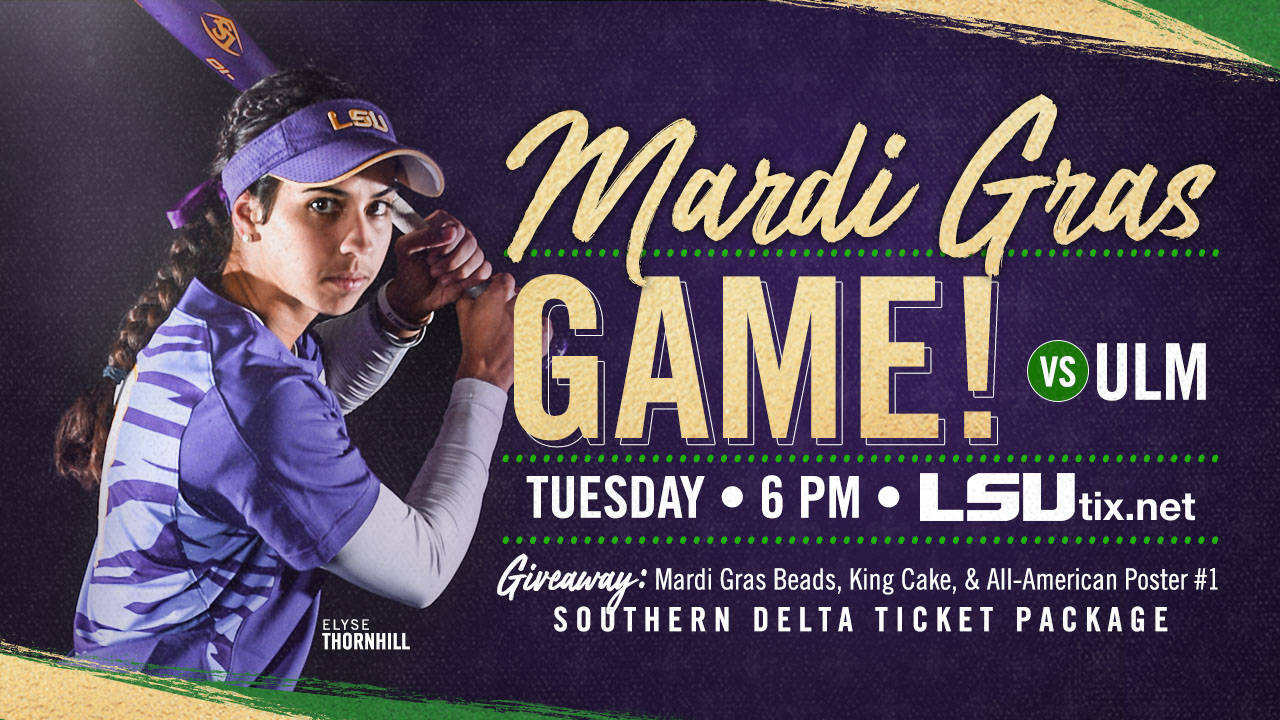 The game will broadcast live on SEC Network+, available through the WatchESPN app, and live stats will be available on LSUSports.net. Lyn Rollins and Yvette Girouard will be on the call.

Tickets & Giveaways
Tickets are still available for Tuesday night’s contest. Visit LSUtix.net or by calling the LSU Ticket Office at 225-578-2184. A mini ticket plan is available. The Southern Delta Package is $16 and includes tickets to the ULM, Southern Miss, Northwestern State and South Alabama midweek games. A few giveaways will take place for the Mardi Gras game, including Mardi Gras beads, King Cake for the first 500 fans and the first All-American poster.

About LSU
The Tigers started off the 2018 season with a 4-0 record. They opened up the season with a 3-0 shutout of Illinois-Chicago. Senior Carley Hoover led the Tigers in the circle, allowing just two hits, while striking out 12.

LSU picked up a 9-2 victory over UT Arlington and a 4-0 victory over Southern Miss Friday night. After being rained out Saturday, the Tigers put together a 7-0 shutout of UMass on Sunday to finish out the Tiger Classic. Allie Walljasper threw back-to-back shutouts in the Southern Miss and UMass games. She allowed six hits on the weekend in her 14 innings of work, while striking out 12 in two complete-game efforts.

At the plate, junior Amber Serrett led the Tigers, hitting .455 with five RBI, four runs scored and a home run. Shemiah Sanchez blasted out the first home run of the season for LSU in Sunday’s game, a two-run shot over the left field wall. Serrett’s home run followed later in the fifth inning, a three-run shot over left field.

Series Record Against…
The Tigers are 10-0 against ULM. The last time they faced each other was last season at Tiger Park. LSU claimed a 9-1 victory in five innings. Maribeth Gorsuch earned the victory in the circle, allowing one run off three hits, while striking out one.

Scouting the Opposition
ULM kicked off their season last weekend, hosting the Mardi Gras Classic. The Warhawks opened the 2018 season with an 11-2 victory over Grambling State. The Warhawks followed with a 12-10 victory over North Texas before falling to Stephen F. Austin on Friday 6-4. The Warhawks rallied to win the second game of the doubleheader against SFA, 9-3.

What’s On Deck
Following the Tigers’ game with ULM, they will play host to the Purple & Gold Challenge February 16-18. Live stats will be available for all tournament games. The Tigers will kick off the tournament with a 5 p.m. game against Central Arkansas.