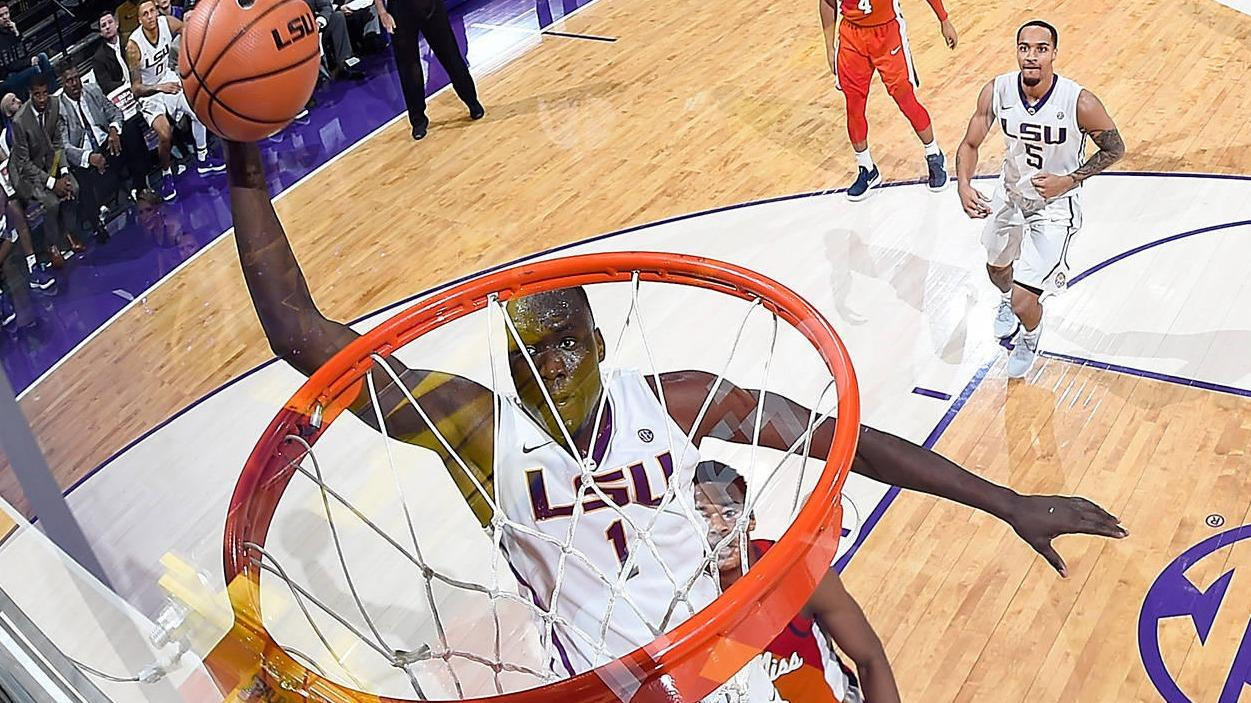 Duop Reath dominated the competition scoring 26 points, hitting 10-of-12 field goals attempts, including his one three-point shot and 5-of-6 at the line. He was one of four players in double figures with Skylar Mays getting 17 points and Tremont Waters and Aaron Epps 11 each. Waters had eight assists and just one turnover in 31 minutes, while Epps had nine rebounds to go with his 11 markers.

Bruce Stevens and Deandre Burnett each had 16 points for Ole miss while Breein Tyree had 10.

LSU had a dominating 44-22 advantage in points in the paint in the game.

The Tigers appeared early to be able to control the game in the first half, building a 14-point, 31-17, advantage with 6:01 to go before intermission, but LSU let Ole Miss take advantage of the boards and began to make a dent in things, going on a 20-6 run to go to the intermission tied at 37.

Ole Miss actually took the lead on a jumper by Justas Furmanavicius, 35-34, with 1:25 left and then after an LSU miss, 37-34, with 47 seconds left on a Terrance Davis jumper. Waters came back on the Tigers final possession of the half to tie the game going to the dressing room.

But LSU returned to working the ball back inside in the second half and took the lead for good 23 seconds in on a three-pointer by Mays, who for the second straight Saturday, scored 15 points in the second 20 minutes. The lead blew up with LSU up six, 52-46, with 12:57 left as the Tigers scored the next nine points on a layup by Wayde Sims, a three-point play by Mays, a Sims layup and a Mays dunk.

The Rebels had no answer as LSU was able to even its conference record at home at 3-3 and win for the 10th time in 14 home games. It was the ninth time this season that LSU has shot 50 percent in a game and won this year and LSU is 10-0 dating back last year when shooting 50 percent or better.

Opening statement …
“It’s a good win. It’s hard to build a lead like that in the first half so give our guys credit for that. We didn’t close the first half very well. Poor, poor job on the backboards as usual. We did win an SEC game by 16 points so I guess that’s a good day.”

On coming out to start the second half and reestablishing dominance in the game…
“They missed a couple shots. They were able to establish (Bruce) Stevens. I’m not sure we did anything in particular. We had some more active hands. I though Skylar (Mays) got us going with that three.”

On everyone playing really well tonight …
“I wouldn’t say that we played perfectly, but everyone played pretty well today. (Aaron) Epps got out on transition a lot. He got back-to-back dunks. Skylar (Mays) made some threes, Daryl (Edwards) was a little off today but he hit big-time shots. Duop (Reath) did his role. Brandon Rachal came in and did what he had to do. I just ran off of it and just helped everybody on defense.”

On what got him going in the second half …
“It was a tied game so I just tried to come out aggressive and I got open looks early and I was able to knock down shots. Tre (Tremont Waters) did a great job finding me.”

On coming out strong in the second half after struggling late in the first half …
“It shows that we can play very well, but it shows that we have to work to maintain that. We just have to keep working at it.”

On what was working for him tonight …
“I was just being aggressive. Coach (Will Wade) told me that, even before the game, to be aggressive and they would play one-on-one coverage on me. Just trying to make quick moves, be patient in the post.”

On shooting really well in the first half …
“I was just in rhythm. Shout out to the team, those guys just kept giving me the ball and it was really just them keeping me in rhythm.”

On if it was an emphasis to dominate the boards today …
“Coach talks about that every day. We just wants us to be active out there. Just to be tough really.”

On coming out strong in the second half after struggling late in the first half …
“I just shows that we want it. We have been counted out, so we just want to prove everyone wrong.”

On his team’s attitude at halftime…
“I thought we had a little momentum. Tremont Waters hit a tough three when we were up by three and then Deandre (Burnett) just dribbled it out of bounds, which is baffling. Considering where we were, I think we were down by 14 with a little over five or six minutes left in the half, we felt good about it. Our guys had a lot of energy. First play of the second half, they get the ball late in the shot clock. Our initial defense was pretty good late in the shot clock. Skylar Mays just runs to the corner wide open and we just looked around while he shoots it in. We had no answer all night, obviously, for (Duop) Reath. Whenever he caught it in the post, he scored. We were trying to limit his post touches, but he was efficient. He was 10-for-12 and he played right over the top of us.”

On what he’s seen from Will Wade‘s team so far this year…
“I’ve had a lot of meetings with LSU. I think today may have been the 20th or something. But I’ve seen a lot of really good players in this building in a lot of big games, some for the Tigers and some for the Rebels. I’ve been impressed with Will. He’s coming in year one, new to the league, and he’s got his guys believing. They’re playing to their strengths, obviously everything goes through the dribble penetration with Waters. Today he didn’t shoot it great, but he had eight assists and he’s making the right decisions with the ball.”