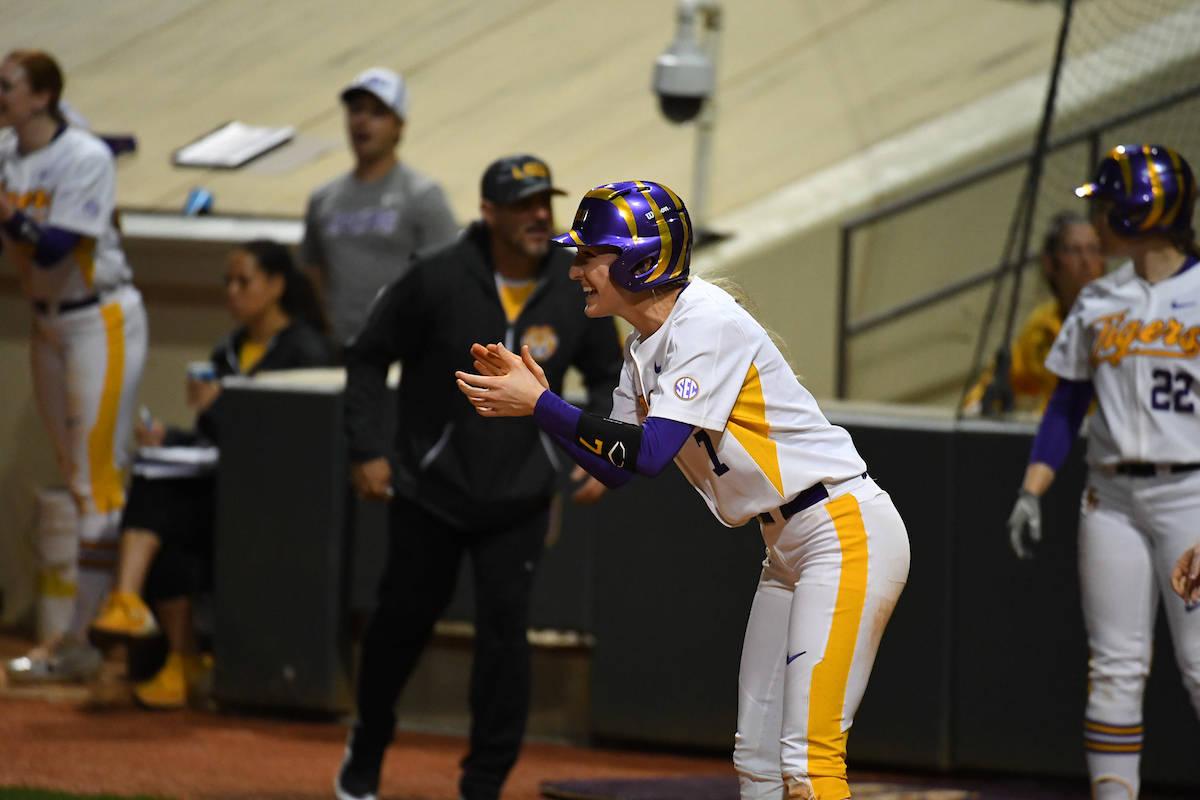 BATON ROUGE, La. – The eighth-ranked LSU softball team swept the first day of the Tiger Classic, defeating UT Arlington, 9-2 and Southern Miss, 4-0. With the two wins, the Tigers improve to 3-0 on the year.

It was a night of firsts for the Tigers, as junior transfer Becca Schulte recorded her first RBI as a Tiger and freshman Shelbi Sunseri recorded her first complete-game victory donning the purple and gold.
Along with Sunseri, Allie Walljasper threw a complete-game shutout, striking out eight batters and walking none in game two against Southern Mississippi.

Game 1
In game one, UT-Arlington got on the board first in the second inning when the Mavericks scored two runs. In the bottom of the inning LSU would tie the game up with two RBI singles from Claire Weinberger and Emily Griggs.

The game was still knotted up at two apiece when LSU came to bat in the fourth inning. Griggs got her second RBI of the night driving in Serrett from second base. In the next at bat, Aliyah Andrews drove Griggs in to give LSU the 4-2 lead.

The fifth inning was when LSU broke the game wide open. Serrett started the scoring off with a two-RBI bases-loaded single to left field. Schulte followed with a hit that scored two runs to produce her first RBI at LSU. Schulte eventually came around to score on an Andrews double to right field.

LSU starting pitcher, Sunseri, held UT-Arlington scoreless over the final five innings of the game to chalk up a complete-game victory in her first start at LSU.

Game 2
Walljasper pitched a shutout for LSU in the final game of the Tiger’s double-header and led the Tigers to a 4-0 victory over Southern Mississippi.

Walljasper threw eight strikeouts in her first start of the 2018 season and allowed only four hits in her shutout performance.

Schulte doubled to right field with one out in the second inning and that was followed by a Michaela Schlattman walk. Serrett then reached on a fielding error by the shortstop. All three of them would come around to score to take a 3-0 lead.

LSU tacked on its final run of the game in the third inning after Amanda Doyle launched a one-out double over the right fielder’s head. Walljasper followed with a single, moving Doyle to third. Doyle eventually came into score on a wild pitch.

Notes
>> Walljasper threw just 16 balls of her 87 pitches in the second game and did not allow a walk. She starts off the 2018 season 1-0. It was her 16th shutout in her career.

>> Schulte hit a team-leading .600 on the day, tallying three hits in five at-bats. She recorded an RBI, a double and three runs scored.

>> Serrett finished the day 3-for-6 at the plate with three run scored and two RBI. Andrews, Doyle, and Griggs had two hits apiece. Griggs and Andrews finished with two RBI each.

On Deck
The Tigers will continue the Tiger Classic on Saturday with games against UMass at 5 p.m. and Syracuse at 7:30 p.m. For more information on the 2018 Tiger Classic and a full schedule, click here.