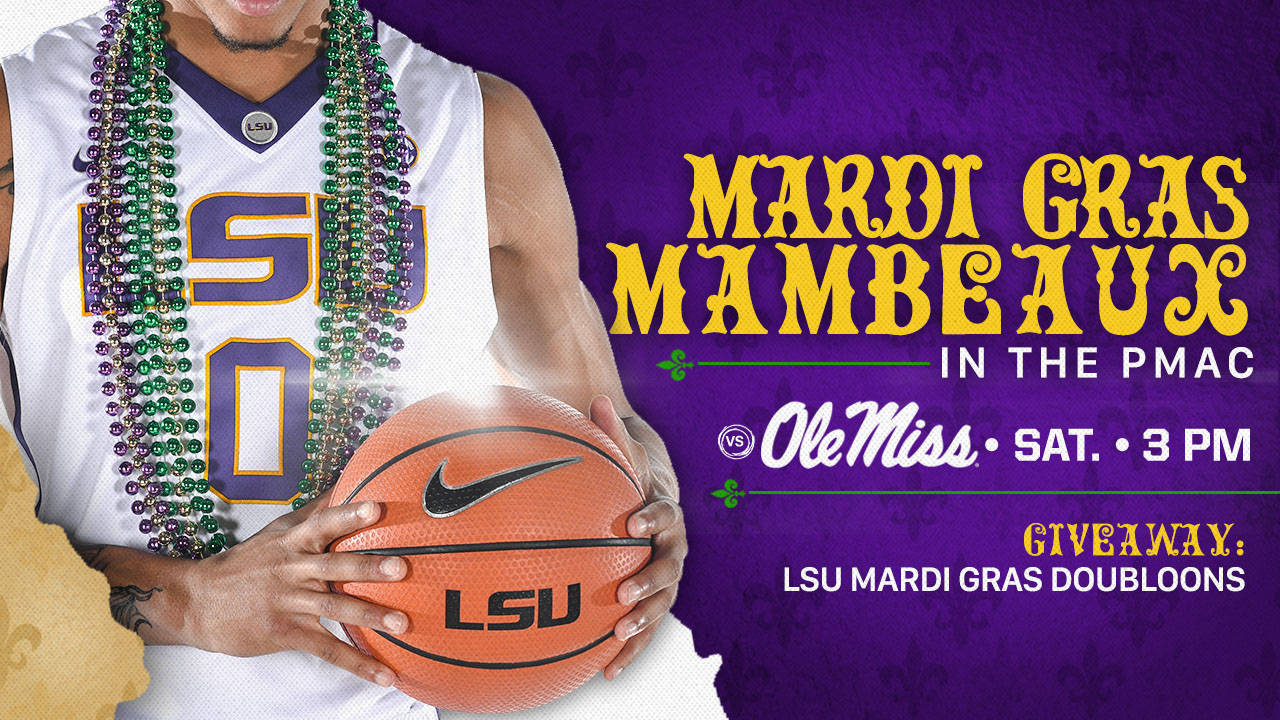 The game will be televised by ESPNU and broadcast on the affiliates of the LSU Sports Radio Network (Eagle98.1 FM in Baton Rouge).

Tickets are available online at LSUTix.net and at the upper concourse ticket windows of the Maravich Center which will open at 1:30 p.m. LSU students are admitted free with a valid student ID.

The Tigers are 13-10 on the season under first year Coach Will Wade and 4-7 in the Southeastern Conference, while Andy Kennedy’s Rebels are 11-13 overall and 4-7 as well in the SEC. The Tigers are part of a group of four teams at 4-7 with two teams in front at 5-6 and four more teams at 6-5.

There are several matchups that could begin to set up positioning in the league as SEC play begins its final three weeks following Saturday’s play.

The Tigers have won their last two home games against Texas A&M and Arkansas and will look to even its home SEC record against the Rebels. LSU is coming off a 73-64 loss at Florida on Wednesday night. Ole Miss has lost three straight games (at Texas), at Tennessee and at home against Missouri.

Brandon Sampson led LSU with 17 points in the loss to Florida, his first back-to-back double figure scoring games since he sprained his ankle in the fourth game of the year. Guard Tremont Waters continues to lead the Tigers at 15.0 points per game and 5.9 assists per game.

Ole Miss is paced by Deandre Burnett at 14.4 points per game while Terence Davis averages 13.8 a contest.

Coach Wade met with the media on Friday and here are a couple of his comments:

Opening Statement
“I stand by what I said after the Florida game. We played hard, we just didn’t play very smart. I didn’t think we made enough winning plays, enough smart plays down the stretch. That’s pretty much the review of that. Ole Miss, we are going to have to rebound the ball, guard them without fouling. I’m worried about that. They are just so big and physical at the guard spot. They are bigger than us and stronger than us. We’ve got to sit down and guard and hopefully use our quickness the best we can. Keep their big guys off the backboards.”

You Said LSU Played Bad Offense First Five Minutes Second Half…
“We whiffed on a bunch of screens. We don’t screen anybody. We don’t set up screens. We don’t play offense in the scoring area. See what happens is last week we spent a lot of time on our defense. Our offense had been playing well. So we plugged one leak and then we go to take on the next leak, the leak that we just plugged the day before, the water starts coming back through. We haven’t been able to get them both on the same page if that makes sense. So we did fix the defense. They still scored a lot but they scored in ways maybe not necessarily they had been scoring. We probably spent 10 percent of our time on our offense leading into that game and our offense just went all out of whack.”

On Ole Miss …
“They pose a challenge because they play five or six different defenses and they play multiple defenses on one possession which is a challenge when you have a freshman point guard who hasn’t seen a lot of that stuff. It takes a lot of the control out of your hands as the head coach. Your guys have to play a lot more off their natural ability. So there are some issues as to what they do defensively and what we do offensively and how that matches up. That could be difficult for us.”