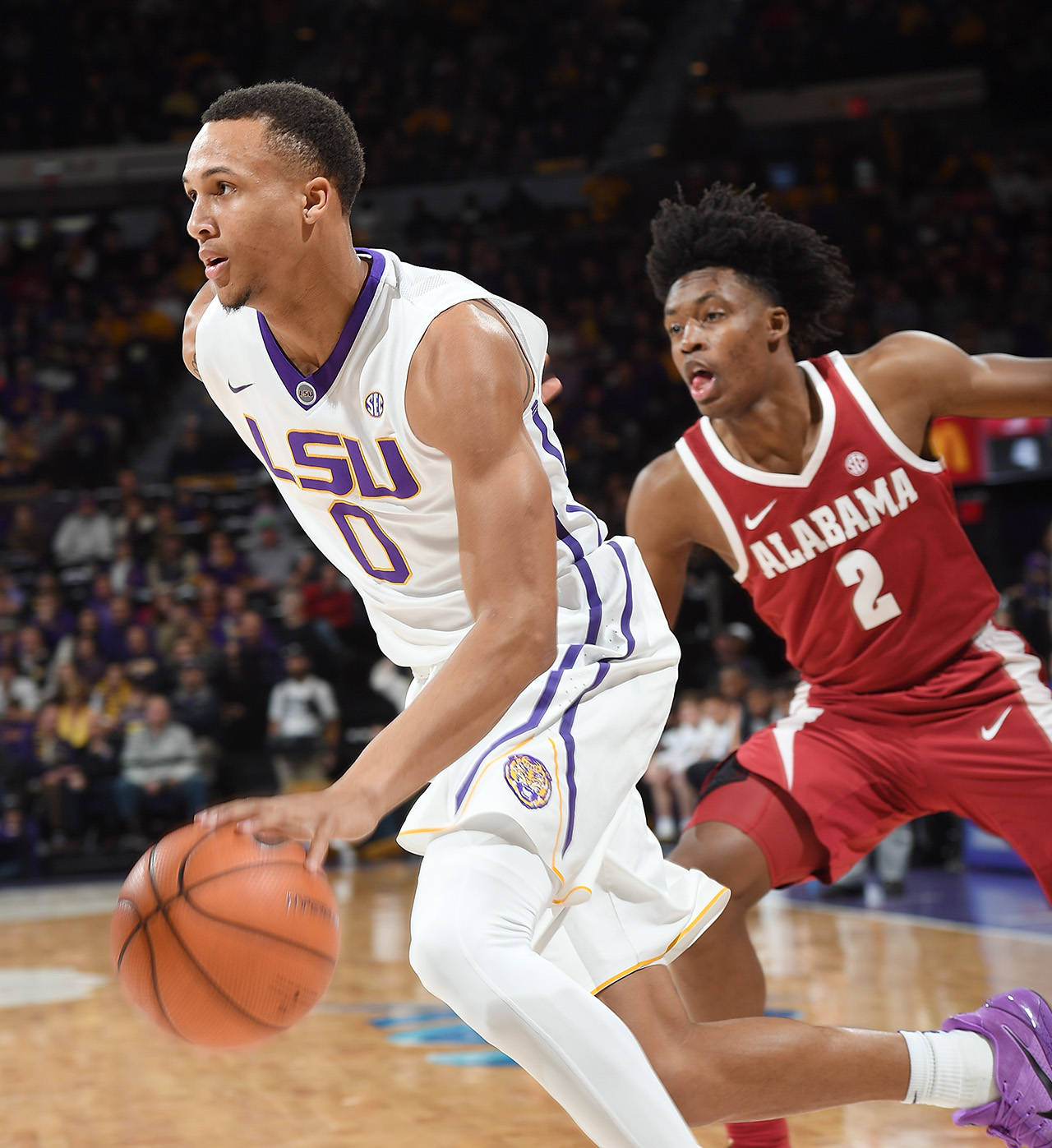 GAINESVILLE, Florida — The LSU Tigers upped its game on the road Wednesday night, leading the formerly-nationally-ranked Florida Gators twice inside the final seven minutes before finally falling at the Exactech Arena at the Stephen C. O’Connell Center, 73-64.

The Tigers led a majority of the first half before Florida took a double digit lead in the second half only to see the Tigers take it right back to the Gators and regain the lead. But turnovers, points off turnovers, points left at the free throw line and good ball movement to set up buckets by the Gators spelled the difference.

LSU drops to 13-10 overall on the year, 4-7 in the SEC entering a 3 p.m. home contest on Saturday afternoon against Ole Miss. That game will be televised by ESPNU and broadcast on the affiliates of the LSU Sports Radio Network.

Florida, which had dropped three straight SEC games, including two at home, is now back at 7-4 in the SEC and 16-8 overall.

LSU’s only double figure scorer came off the bench in Brandon Sampson who hit four treys and 5-of-8 field goals to go with 3-of-5 at the free throw line to finish with 17 points in 29 minutes of play. Tremont Waters and Daryl Edwards, who moved into the starting lineup in place of Randy Onwuasor, each had nine points. Waters added six assists. The forward combo of Duop Reath and Aaron Epps each scored eight points.

Jalen Hudson led Florida with 18 points, while Keith Stone had 15 and Egor Koulechov had 12. Chris Chiozza had just three points, but like Waters, also had six assists.

After shooting over 90 percent at the arc and making 21-of-23 in the win over Arkansas at home on Saturday, the Tigers were just 7-of-15 for the game, making just 4-of-7 in the opening 20 minutes and 3-of-8 in the second half.

Although Florida scored the first four points, the game was nowhere near what the starts were by opponents against the Tigers in road losses to Auburn and Tennessee. LSU quickly tied the game after buckets by Reath and Wayde Sims and after Florida took a 9-7 lead, the Tigers got a three from Sampson, and, buckets from Sims and Epps to push out to a 14-9 lead.

That lead went to nine, 20-11, at the 10:06 mark after another layup by Reath and a next possession three-ball by Sampson. Florida would cut the game to two, but LSU responded and kept the lead for the remainder of the half and at intermission led, 33-31.

But Florida, which began working the ball inside more late in the first half, was too quick on the draw out of the dressing room, outscoring LSU 17-3 in the first 5:05 of the second half. An Epps bucket and a free throw by Waters in the first 90 seconds was all the scoring LSU could do as Koulechov and Hudson began to heat up.

By the time the run was over, LSU was down 12 points, 48-36, and the Tigers appeared in real trouble as Coach Will Wade used two of his three remaining time outs to try to slow the Gators.

But LSU was not ready to roll over on this one just yet. The Tigers continued to scrap and cut the game back to four points, 52-48, with 10:48 to go forcing Florida Coach Michael White to take a timeout.

Florida posted back out to eight at 56-48, but Edwards hit a trey off a pass from Reath and then following a Waters turnover, missed Florida three and rebound by Waters, the freshman drove through traffic, scooped and scored and was fouled. His subsequent free throw made it 58-54 with 8:12 still to play.

Prior to the eight-minute timeout, a turnover by Florida and a steal by Mays gave LSU the ball. The Tigers ran a play and Waters in a scramble found Edwards for another three to cut the Gator lead to 58-57.

Following the media timeout, Florida missed a couple of shots and Waters found Sampson on an alley oop for a slam that allowed LSU to come all the way back to take a 59-58 lead with 6:54 to go in the contest. Epps would foul on the other end and Stone’s two free tosses made it 60-59 Florida. Both teams missed three pointers putting the ball in Waters hands again for a two-point jump shot that gave LSU its final lead at 61-60 with 5:45 left.

Florida took the lead back for good on a Hudson jumper with 5:26 to go and LSU turned the ball over twice in succession and Florida converted both times to go up 68-61. Waters would hit a three to make it 68-64 with 3:50 to go but that was LSU’s last points as Florida converted and the Tigers missed five three-point attempts and two layups to close the game.

Opening statement
“I thought our guys played extremely hard, we just didn’t play smart. Hudson took over down the stretch, made some big time plays, big time shots. Chiozza really controlled the game and did a nice job. Give Florida a lot of credit. They played well. They are a very good team and they are going to finish strong.”

On Waters [Tremont] turnovers
“I think he forced some things and tried to make some things happen that were not there. He wasn’t himself tonight.

On the offense’s performance
“Some of it was plays, some of it was just guys playing, and some of it was just taking advantage of some mismatches. [LSU] did a really good job of keeping us off-balance, they switched a ton, they had the film from the last go round of course and they showed some majority man and jumped into some 1-3-1, they spread us out a little bit, we made a couple of poor decisions there in the second half a little bit later down the stretch. We had good ball movement, I thought Keith [Stone] was really good, kind of set the tone in that regard attacking close outs, playing off a two feed, did a better job of searching and cutting when guys came to jump stops, valued the ball at a pretty high level, got decent inside out action, more so than most games this season. Didn’t get a lot out of ball screen action with them switching so much. Sometimes we got a little stagnant off of trying to exploit some mismatches off of those switches, but I thought we were at our best when the ball moved.”

On the team driving more to the basket
“Some of it is us and some of it is the defense, too, just tinkering runs off the line. We did a better job of cutting after guys drove and when Chris Chiozza and KeVaughn Allen drive in and come to jump stops and play under control and then we stand, obviously you get nothing and teams are going to scout you, which they extend you and try to run you off the line. We drove through contact a little bit better, got to the foul line, earned the right to get to the foul line a little bit better. We still didn’t convert, I don’t know how many we missed, but there was a bunch of point-blank stuff in the paint that we’ve got to find a way to get better at, we’ve got to finish those. Because at the end of the day, if needed a KeVaughn step back 17-footer, and a Mike Okauru hard runner going left, we’ve got to finish the easier ones. We also had some open threes that we’ve got to take advantage of, these games are all really, really hard. LSU was terrific, they hit some really timely shots, my goodness they hit sone big ones. I thought we did a good job on [Tremont] Waters, Chris was great, all of the guys were great, KeVaughn expended a lot of energy on Waters as well. I thought [Duop] Reath was one of the toughest covers in the league on the block, Kevarrius played with a ton of energy, thank goodness he only got eight, but Brandon Sampson, wow, he was really good, Daryl Edwards stepped up and hit a couple of big ones as well.”