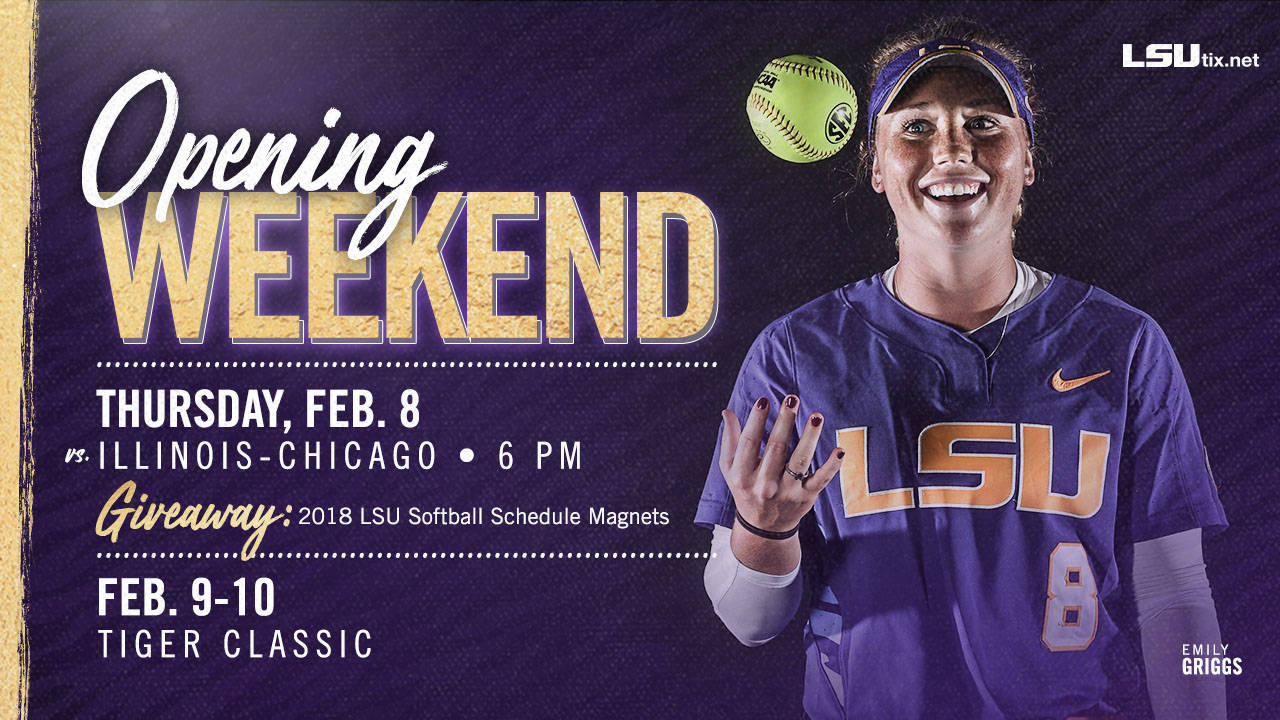 The Tigers, under seventh-year head coach Beth Torina, return 13 letterwinners, including two All-American pitchers in Allie Walljasper and Carley Hoover. In 2017, the Tigers finished with a 48-22 overall record and qualified for the Women’s College World Series for the third consecutive season, one of two programs in the nation (UCLA) to reach that feat.

Tickets & Giveaways
Tickets are still available for all games this weekend. Visit LSUtix.net or by calling the LSU Ticket Office at 225-578-2184. A giveaway will take place for Thursday’s season opener and will include a schedule magnet.

Torina’s Thoughts
On opening the season…
“It is exciting to get started. Fans will see a continuation of what LSU softball is all about. They are going to see the continued tradition of very talented softball players. We have some great athletes that can run, hit, pitch and do a lot of different things. You will see some very athletic young women.”

On facing Illinois-Chicago in the opener and facing tough opponents early…
“Illinois-Chicago has a huge history of being a quality softball program. I am sure we will see a well-coached and well-put together team on Thursday night. These girls came here to play the best. Our entire season prepares us for the post season. We go out and compete against any team that shows up on the other side of the field, no matter when, where or what time of the season, we are going to give it our best shot.”

Scouting the Opposition
Illinois-Chicago
UIC was unanimously selected to finish at the top of the Horizon League in the preseason coaches poll last week. Having won the last three regular-season titles, the Flames received all nine first-place votes for a total of 81 points. The Flames finished the 2017 season with a 39-22 record and a bid to the NCAA Tournament.

Southern Miss
Southern Miss comes into the matchup with a 2017 record of 27-26. Wendy Hogue is in her 4th season at the helm. The Golden Eagles returner outfield Samantha Reynolds, who finished second on the team in batting average with a .320 mark.

UMass
UMass finished the 2017 season as both the regular season and conference tournament runner-up with a 29-24 record. UMass returns three all-conference selections to the 2018 squad. At the helm is head coach Kristi Stefanoni, who is in her fifth season.

Syracuse
Syracuse finished off the 2017 season with a 31-19 record. The Orange was tabbed to finish sixth in the ACC softball preseason poll. They return five starters from last year’s lineup along with two starting pitchers.

What’s On Deck
The Tigers will host the Louisiana-Monroe at 6 p.m. on Tuesday February 13 at Tiger Park. The game will be streamed online on SEC Network+, available through WatchESPN.