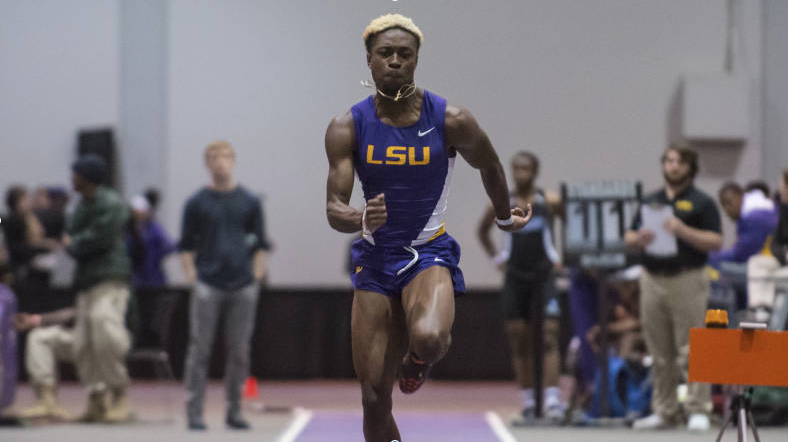 For the men’s 200-meter, junior Jaron Flournoy led all Tigers with an altitude-adjusted time of 20.92 seconds. Flournoy finished second among collegiate runners overall, and he improved his team-leading time for the event as well.

Juniors Correion Mosby and Christian Boyd as well as sophomore Akanni Hislop won their respective preliminary heats. Boyd and Mosby collected personal-best marks of 21.97 and 20.96 seconds also adjusting for altitude. Mosby, Hislop and junior Jahnoy Thompson all cracked the top-ten, finishing in third, fourth and eighth respectively of those running in college.

The Lady Tigers were paced by senior Mikiah Brisco, juniors Rachel Misher, Kortnei Johnson along with sophomore Cassondra Hall whom all had top-ten finishes. Outside of the top-ten, the Lady Tigers also had four new personal-bests set.

Junior Amy Stelly continued in the field events, making her season-debut in the women’s pole vault. Stelly placed second, and tied her personal-best mark of 11′ 10”.

Senior Da’Quan Bellard and sophomore Jace Attuso were the remaining qualifiers on the men’s team, and they respectively finished in sixth and seventh-place overall.

In the men’s pole vault, junior Chadd Burns came in second among members of collegiate teams at a mark of 15′ 3”.

The women’s long jump followed, and Lady Tigers finished 1-2. Freshman Abby O’Donoghue was crowned event-champion at a height of 5′ 11.25”, a personal-best in her young career, and she now sits tied for sixth in school history. Junior Kaitlyn Walker followed in second-place at 5′ 8”.

The triple jump closed out the field events for both teams Friday night, and sophomore Christian Miller earned the event-title in his season-debut for the event. Freshman Kyndal McKnight competed in the event for the Lady Tigers, placing third.

Bayou Bengal on the Track

Junior Arthur Price kicked-off action for the men’s team, setting a personal-best in the 60-meter hurdles at 8.11 seconds. Price placed third in his heat and qualified for the finals. Junior Brittany Kelly followed in the same event with a heat-winning time of 8.69, initially her top time of the season.

Price and Kelly both improved their top marks in the finals of their respective events as Price came in at 8.09 seconds, and Kelly at 8.67. However, Kelly was also able to muster a personal-best of her own later on in the women’s 400-meter dash.

Freshman Kary Vincent Jr. took his talents from the gridiron to the track, and his debut was impressive. In his preliminary heat, the defensive back notched a qualifying-time of 6.76 seconds, and then bettered that in the finals placing fourth in 6.74 seconds. Vincent currently holds the second-fastest time for the Tigers this season.

The Lady Tigers grabbed two medal positions in the mile as freshman Alicia Stamey and junior Rebecca Little placed first and third respectively. Stamey, who made her season-debut in the event, finished with a converted-time of 5:07.79.

Little’s personal-best at 5:13.37, also converted to a banked-track time, bettered her previously-held best by more than 10 seconds. Freshman Amber Desselle also made her mile debut of this indoor season, placing seventh.

The women’s team continued their long-distance success in the 3000-meter placing three in the top-ten overall. Senior Ashley Welborn and sophomore Monica Guillot placed in second and third respectively. Both Welborn and Guillot recorded personal-bests in the process.

Freshman Heather Cizek was the third to crack the top-ten as she earned ninth-place in her 3000-meter debut.

While the Bayou Bengal Invitational is now in the books, LSU’s athletes will return to the Albuquerque Convention Center for the second day of competition in the New Mexico Collegiate Classic. Action is scheduled to kick-off at 10:00 a.m. CT, and will run through the 4×400-meter relays beginning at 3:55pm CT.