Football Goes for Win No. 10 in Citrus Bowl 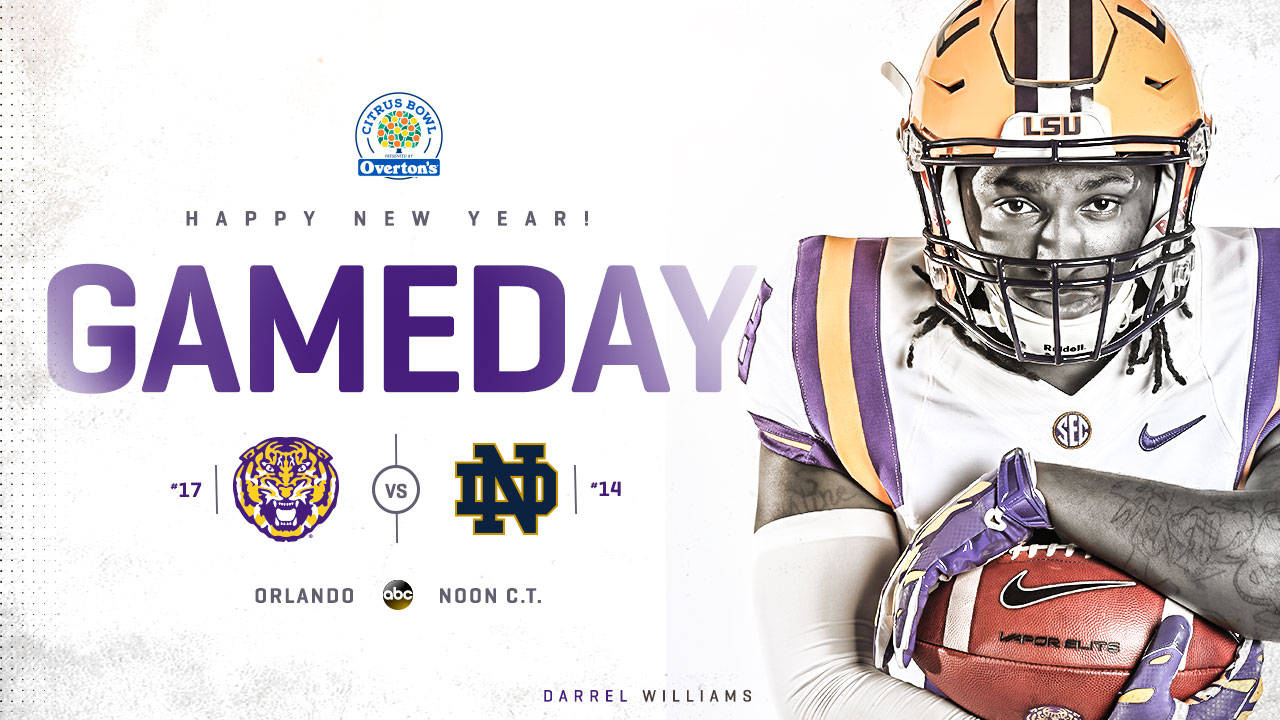 ORLANDO – LSU, winners of six of its last seven games, will look to wrap up its first full season under head coach Ed Orgeron with a 10th win as the 17th-ranked Tigers face 14th-ranked Notre Dame here Monday in the Citrus Bowl presented by Overton’s.

Kickoff for the 12th meeting between LSU and Notre Dame is set for noon CT from Campus World Stadium. The Irish lead the overall series with LSU, 6-5, but the Tigers are 2-1 against Notre Dame in bowl games. The teams last met in the 2014 Music City Bowl when the Irish kicked a field goal as time expired to win, 31-28. LSU’s win over the Irish in bowl games came in 1997 by a 27-9 count in the Independence Bowl and by a 41-14 margin in the 2007 Sugar Bowl.

Monday’s game will be televised on ABC with Mark Jones, Rod Gilmore and Quint Kessenich on the call. The game can also be see on the Watch ESPN app.

The game can also be heard on the LSU Sports Radio Network with the Voice of the Tigers Chris Blair, Doug Moreau and Gordy Rush calling the action. The game can be heard in the Baton Rouge area on Eagle 98.1 FM or for free on the internet at www.LSUsports.net/live.

LSU has been on a roll since the first week of October when the Tigers knocked off 21st-ranked Florida, 17-16, in Gainesville. The win over Florida started a stretch that saw the Tigers close the regular season with wins in six of their last seven games. LSU brings a 9-3 overall mark into the New Year’s Day clash with Notre Dame.

For the first time since 1949, and just the second time in school history, LSU won three SEC games during the month of November by 20 or more points.

The Fighting Irish won eight of their first nine games and climbed to as high as No. 3 in the College Football Playoff Standings before dropping two of their last three games.

Notre Dame goes into the LSU game coming off a 38-20 setback to Stanford on Nov. 25, while the Tigers trounced Texas A&M, 45-21, in their regular season finale. LSU also had a 33-10 win over Arkansas and a 30-10 road victory over Tennessee during the month of November.

Against the Irish, LSU will face an offensive line that is considered one of the best in the nation and features a pair of 2017 All-Americans in left tackle Mike McGlinchey and left guard Quenton Nelson. Those two helped pave the way for an Irish offense that is averaging 35.3 points and 279.1 rushing yards a game.

Overall, the Irish offense is accounting for 454.9 total yards a contest.

“The left guard and left tackle, can’t keep my eyes off of them,” Orgeron said when asked about what sticks out when watching the Notre Dame offense. “They’re the best combo I’ve ever been against. They’re not only good players, they’re really well coached.

“And their quarterback is dangerous. Obviously he is a dual threat quarterback. He’s dangerous with the ball in his hands. They (have a) great game plan.”

Running back Josh Adams leads the Irish with 1,386 yards and nine TDs, while quarterback Brandon Winbush has rushed for 765 yards and a team-best 14 TDs. He’s also thrown for 1,818 yards and 16 scores for the Irish.

The Tigers will attempt to slow down the Notre Dame offense with a defense that features the leading tackler in the Southeastern Conference in Devin White along with a veteran defensive line led by seniors Christian LaCouture and Greg Gilmore.

LSU will be without the services of three starting linebackers as Arden Key, Corey Thompson and Donnie Alexander will all miss the game with injuries. In their absence, LSU will go with sophomore Michael Divinity and a pair of true freshmen in K’Lavon Chaisson and Tyler Taylor.

“They’ll step up and they will be ready,” Orgeron said of his trio of young linebackers. “We’ve worked hard getting ready for this game. There will always be adjustments you have to make during a game and our staff does a great job of that. .

Offensively, LSU will look to one of the best 1-2 punches at running back in college football in Derrius Guice and Darrel Williams to lead the way. Guice has accounted 1,153 yards and 11 TDs, while Williams has rushed for 776 yards and nine scores. Williams also ranks second on the team in receiving with 22 catches for 327 yards.

Quarterback Danny Etling, a native of Indiana, will wrap up his career against a Notre Dame team that he grew up rooting for. Etling is 16-6 as LSU’s starting quarterback and has thrown for 2,234 yards and 14 scores in 2017 with his top target being senior DJ Chark (35 rec., 811 yards, 3 TDs).

LSU has turned the ball over an NCAA-best eight times this year and will tie the NCAA record for fewest turnovers in a season with a turnover free game against Notre Dame.

“On defense, the way their defense plays, they’re tough, they’re physical and they run to the ball,” Orgeron said. “This is a good football team.”

A win on Monday, coupled with a recent signing class that saw LSU add 21 highly-touted prospect to the roster for next year, will give the Tigers plenty of offseason momentum.

“As you know, when you win the bowl game, like we did last year, (for) six, seven months, there’s a lot of positive talk about your program,” Orgeron said. “It’s an uplifting feeling going into recruiting. Obviously, we only have four guys left — four slots left — but those are four big slots, and this is going to help. But it also helps in junior recruiting. Everything is sped up. So this is huge. This is huge for our program.”