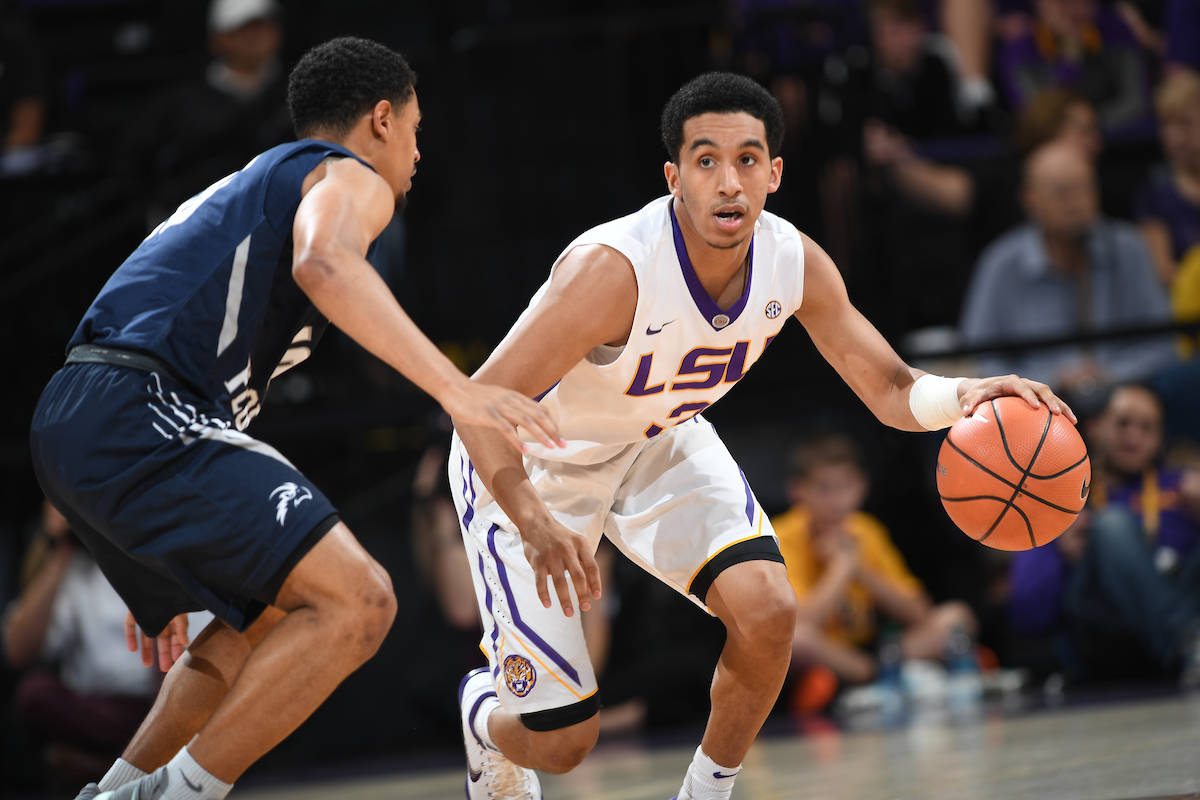 BATON ROUGE – The LSU men’s basketball team posted the biggest margin of victory in a contest since 2006 with a 104-52 win over North Florida Friday night at the Pete Marvich Assembly Center in the final game before the Christmas break for the team.

The game puts LSU at 8-3 with one non-conference game remaining on Thursday, Dec. 28, at Memphis. The team will return to practice on Tuesday afternoon (Dec. 26). For Coach Will Wade it was the 99th win of his college head coaching career.

LSU put the game away early after the Ospreys were able to get off to an 8-4 start before the LSU team, off its best pregame practice of the year according to Coach Wade began to get hot offensively and clamp down on UNF on the defensive end.

Four Tigers posted double figures with Duop Reath leading the way along with Tremont Waters with 15 points. Waters for the third time this season had 10 assists and also had four steals. Aaron Epps had 13 points and just missed a double double with nine rebounds, while Daryl Edwards added 10 points. Skylar Mays had his six-game double figure scoring streak snapped at six with six points and Kiir missed his first double figure scoring game with nine,

LSU had an amazing night in the paint, getting 62 points to just 16 for UNF and LSU got 30 points off 20 Osprey turnovers while UNF did not get any points off LSU’s eight turnovers. LSU had a 19-8 advantage in second chance points.

LSU had 26 total assists for its 43 buckets.

LSU’s next game in the Maravich Center will be on Jan. 3 against Kentucky to open SEC play for the Tigers. Tickets are available during the holiday break at LSUtix.net.

Opening statement …
“It was a good win. I thought we played well. It was one of our more complete games. (Brandon) Sampson did a good job getting in off of the bench. I thought he changed the energy of the game, especially defensively when we brought him in. I’m proud of him. It was good to get him back out there and give him some minutes. That was a positive. Overall, it’s something we need to build off of. We have a lot of big games coming up, a lot of good teams coming up. We have to continue to get better. Our guys prepared well. We had a good couple days of practice, a good shoot around. We played well because of that.”

On today’s up-tempo shoot around …
“I would agree. It was the first time our shoot around in my opinion looked like what a shoot around should look like … The first time we had shoot around one of the media members in there said, ‘Man, y’all practiced.’ I’m sitting there going, ‘That was not practice. This was soft.’ I think it was so dramatic of a change that it looked (different). Today, (LSU Communications Director) Kent (Lowe) was in there. I told Kent, ‘We are going to beat the brakes off of them.’ Today was the first day it looked like how a real shoot around should look like. It looked like it was a practice. It was a 45-50-minute practice. We got in and out of there quick. We were moving, guarding, talking, flying around. It looked like how it was supposed to look today.”

On Tremont Waters‘ defensive performance …
“It was tremendous. He set the tone for our defense tonight. When he guards like that, we are such a better team. He set the tone for our defense, getting over the screens. That was huge. The point of attack, the guy out front of the defense, he makes things happen. When Tre is engaged like that and does that, we are a totally different team.”

On starting fast tonight …
“We had a really good warmup, pregame shoot around this morning. We pretty much went after it like it was practice. We didn’t go in and just go over plays and stuff, we just went up and down and kind of set the tone from the walkthrough.”

On if the dynamic of the team has changed recently …
“I would say yes. Coach (Will Wade) has been stressing on the ball defense and said I pretty much did a good job this game and last game I did an okay job. They are just saying I am doing a lot better job and that everyone is going to follow suit.”

On what it felt like to be back on the court tonight …
“It felt really good. It was killing me, sitting on the sideline watching my team just go out there and play without me. It was a day-by-day thing that I couldn’t rush and it feels real good to be back out there.”

On the process of dealing with the injury …
“If anything, I waited a good amount of time. I don’t think I rushed myself. I could’ve come back two games earlier, but I decided to wait it out. I think I did really well with the waiting process and taking it day-by-day waiting for the bruising to go away and just getting back to playing and running.”

On what has worked for him getting rebounds …
“You could say that I have been consistent a little bit, but I could be more consistent. I feel like that is the game. I let the referees get in control and I get into foul trouble. If I stay out of foul trouble I feel like I will always do okay.”

On having Brandon Sampson back in the lineup …
“It changes everything. His presence is everything for us. He is one of our leaders on the team. He has been around for three years and put in a lot of work. He just changes the whole team.”

Opening statement …
“We started four-for-eight, but then they ramped it up. They were long and extremely aggressive. They did a great job disrupting us and we went one-for-18 with six turnovers in that streak. When they went on that huge run, you have to give them credit for doing what they were supposed to do. Then, they capitalized on the other end by sharing the ball. Anytime you have 26 assists, that shows you what type of team you have and the ability for guys to trust one another. (Tremont) Waters is a special talent. (Duop) Reath is a special talent, but I do believe that (Aaron) Epps, (Wayde) Sims and those guys are a great part of what they want to do in the SEC. They do have some special pieces that obviously showed up and really dominated the game except through the first media timeout.”

On where he feels his team can improve heading into conference play…
“The hardest thing that people don’t realize is when you play $600,000 to $800,000 worth in money games, you’re playing four SEC teams, Michigan State, Michigan and Miami out of your league. Some of that stuff wears on you and this is the first time I ever felt that we looked beaten, which is not good. We have to get rid of that feeling, but we have Mississippi State next. We’re right back into it. After that, we have a home game before the league starts. I think the one thing we have to learn is that defense got us championships when we won them. We have to figure out a way to guard better.”