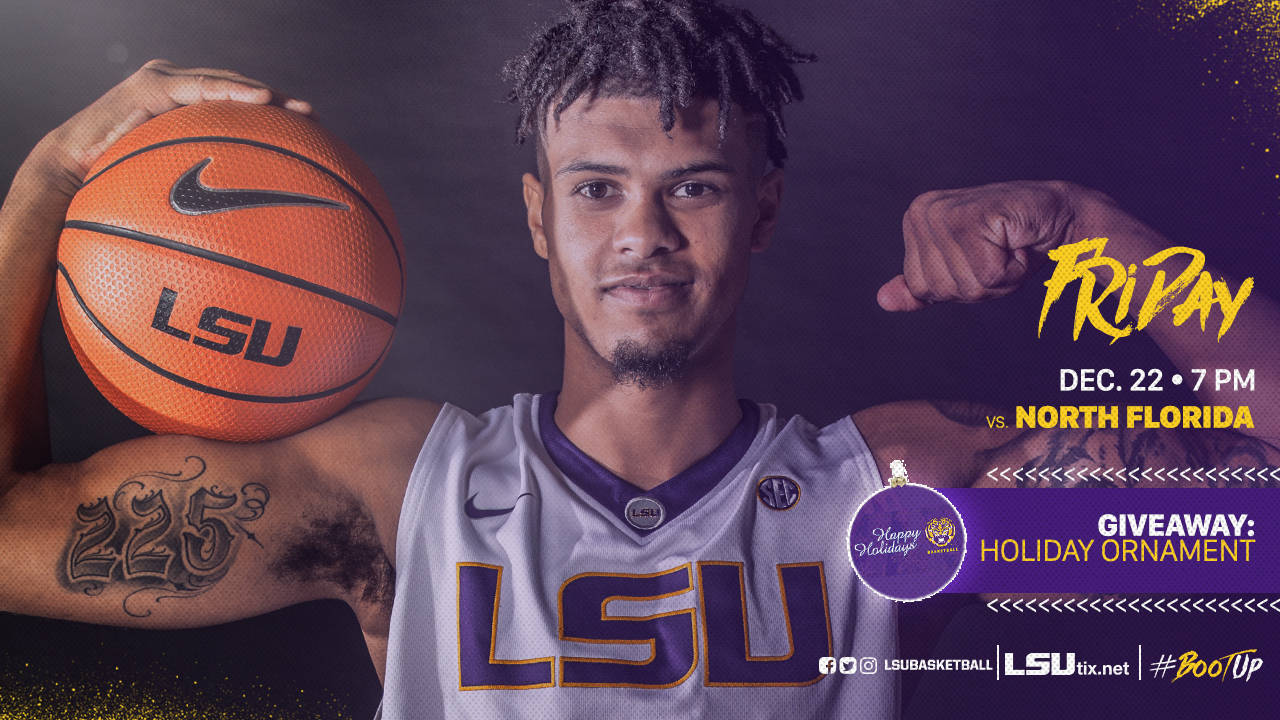 BATON ROUGE – The LSU Tigers look to go on a short Christmas break on a happy note with a win over North Florida when the teams meet for a third straight year Friday night at 7 p.m. at the Pete Maravich Assembly Center.

This is the final game of the five-game Christmas Wadecation with the first 2,000 fans receiving Christmas ornaments. It is also the Coaching for Literacy game as Coach Wade is joining with the organization to help the fight for literacy.

Tickets will be available during the day Friday at the LSU Athletics Ticket Office and at LSUTix.net. The upper concourse ticket windows of the Maravich Center will open at 5:30 p.m. when the doors open to the building. LSU students are admitted free of charge with a valid student ID.

The game will be streamed on the SEC Network + with Lyn Rollins and Victor Howell with Chris Blair and former coach John Brady calling the game on the LSU Sports Radio Network affiliates (Eagle 98.1 FM in Baton Rouge).

Coach Will Wade will finally be able to get back on a somewhat normal schedule after this game as the Tigers have had five games in a 13-day period by the time this game with North Florida concludes. The Tigers were forced to put several games in close proximity because of the November trip to Maui and the lengthy time the team must be off for final exams.

LSU is 7-3 coming into the game off a Tuesday night 80-58 win over Sam Houston State. Five players were in double figure scoring in a balanced night for LSU with Skylar Mays and Randy Onwuasor getting 13 points each, Duop Reath and Daryl Edwards posting 11 points each and Wayde Sims getting 10 points.

UNF is 5-9 on the year and after winning four straight comes in off losses at Mizzou on Saturday at 79-65 at Ball state on Tuesday night. In that game, Noah Horchler had 19 points and 13 rebounds, while Ivan Gandia-Rosa had 13 points and 10 assists with no turnovers in 37 minutes. Osborn Blount and Trip Day each had 10 points for the Ospreys.

After the Christmas break, LSU will return to campus to prepare for its final road non-conference game on Dec. 28 at Memphis. The Tigers open Southeastern Conference play on Jan. 3 at home against Kentucky.