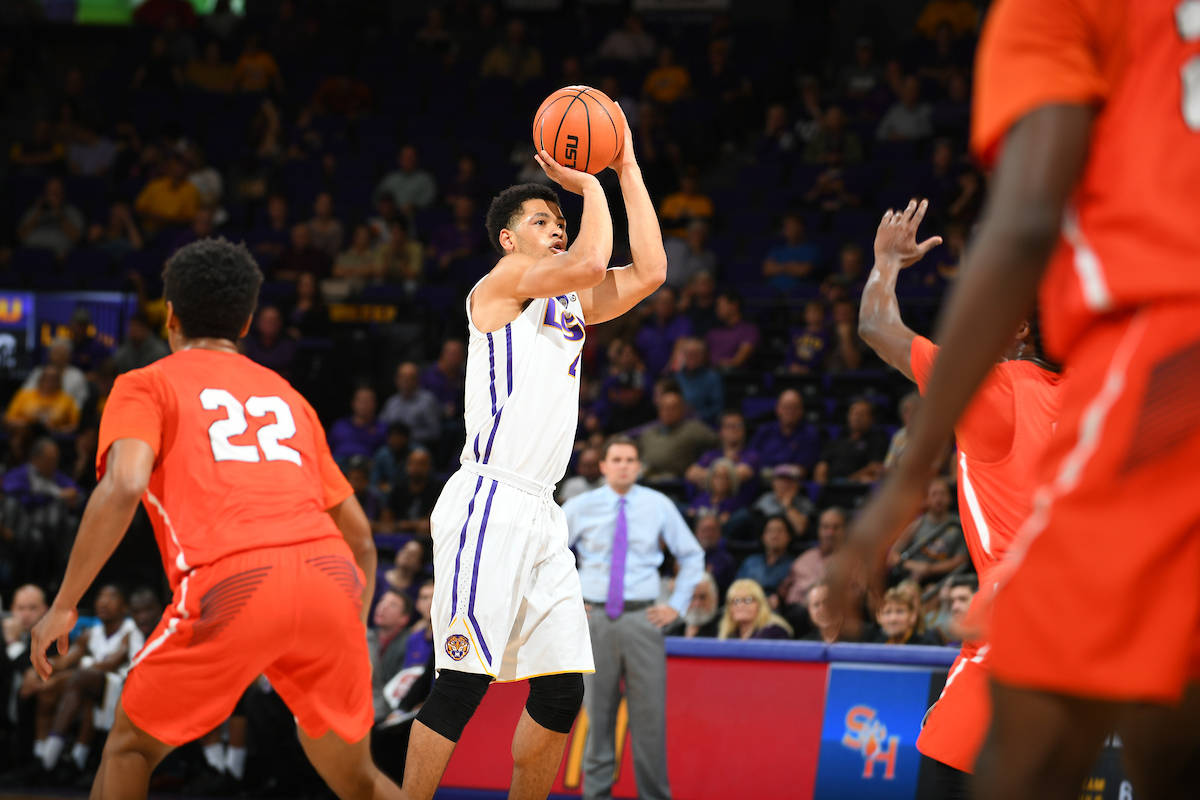 BATON ROUGE – Five Tigers posted double figures numbers as LSU pulled away from Sam Houston State late in the first half and continued to pour it on in the first part of the second half en route to an 80-58 win Tuesday night at the Pete Maravich Assembly Center.

The win put LSU at 7-3 heading into the final game before the Christmas break on Friday night at 7 p.m. against the Ospreys of North Florida. Tickets are available at the LSU Athletics Ticket Office and at LSUTix.net.

Sophomore Skylar Mays hit 6-of-11 field goals with one trey to finish with 13 points, five assists and four steals in 31 minutes, while Randy Onwuasor, the graduate student, hit five field goals including two treys for 13 points in 17 minutes. Duop Reath, back in the starting lineup, hit 4-of-5 from the field and 3-of-6 from the line to finish with 11 points in 17 minutes, with Daryl Edwards getting 11 points and five rebounds in a 27 minute start.

Also, off the bench Wayde Sims played 20 minutes and had 10 points and 10 rebounds for his first college double double with three blocks.

While Chris Galbreath, Jr., the big scorer for Sam Houston, was held eight below his average at 13 points, he was five over his average for rebounds with 14, including eight assists. Abrian Edwards had the big night for Sam Houston State (6-6) with 22 points and 8 rebounds.

LSU had a 36-30 advantage in points in the paint and 16-10 in points off turnovers. The Tigers got their turnover number more where they wanted it in the game, losing it just eight times.

The Tigers jumped out 7-2 in the first 1:50 of the contest but the Bearkats small lineup was giving LSU’s big offense trouble. After Reath had a layup to put LSU up 9-6, Sam Houston scored the next 11 points to move in front of LSU 17-9 at the 14:12 mark of the first half.

The Tigers would push the lead upward as Sam Houston missed several shots to open the second half.

Mays hit a layup to open things, while Tremont Waters made a three, Reath a jumper and Mays a bucket to go up 47-29 just 2:35 into the half, forcing a Bearkat turnover.

Opening statement …
“It was a good win. I thought we settled in and did a nice job. Changing our defenses helped us out. We had good energy from (Wayde) Sims coming in off of the bench to get the double-double. I thought he played well. It was a good night and a good win to bounce back from Saturday. We look forward to getting to Friday here pretty quickly.”

On Wayde Sims‘ performance …
“It was good. He was much more ready to play tonight than he probably has been in a couple of games, and I think that showed.”

On Aaron Epps and the overall team win …
“(Aaron) Epps played well again. He had some balls that (he) just kind of fumbled around a bit where his threes looked like they were going in, but he played well. His activity level was off the charts. We did a better job blocking out. We gave (Sam Houston State forward Chris) Galbreath Jr. six offensive rebounds there before the first media timeout. I thought I was going to explode, but we did a better job of locking down. They did a good job of taking advantage. We started big; they started really small. They picked at the mismatch. We had to get out of that ASAP.”

On finding a rhythm today …
“I was just able to get my hand on balls and create offense off of it. I think as a team, we are at our best when we turn defense into offense. I try to lead by example.”

On the 1-3-1 zone they played tonight …
“It was pretty effective. Galen (Alexander) obviously needs more reps. He was a little lost but he has long arms so that kind of makes up for it. I think the more reps we get at it, the better we will be at it. It is just a matter of being active and it is a more aggressive type of zone so we were trying to use that, get deflections and get out running.”

On the change in performance for LSU halfway through the first half …
“They got off to a good start. We just came in and just brought some energy I guess. When we are in our huddle, we talk and let everybody know what we have to do. That just brings us all together and we are all on one page at that point. I think that helps.”

Opening statement…
“Don’t know what to say. We weren’t very good. We ended up getting beat by 22, and I thought we played decent in the first half, maybe the first 10 or 15 minutes we played pretty well. I thought the last five to seven minutes of the first half we did not play good, and then we came out the first five minutes of the second half was the worst five minutes we’ve played all year long. I mean I know they played better, but it doesn’t have anything to do with our opponent. It had everything to do with us.”

On Abrian Edwards…
Well it was great. We needed another scorer and I know he is more capable than what he has been doing, and I think the biggest thing was matchups. They had a big guy on him to start the game. They decided to start big and we played it into our hands the first 15 minutes of the half, and then they went to that zone. I thought we didn’t do a very good job of executing against it, which we haven’t done all year long. I think the biggest thing against a zone is you can do whatever you want, run whatever you want, but you gotta make threes. We can say what we want to say, but we went to Baylor and we outscored them in the paint. They ran a zone the whole game, but we were 5-of-30 from three. If you can make a few of those you can win. You can win a game like this if come in and make 10 or 12 threes like Stephen F. Austin did. They gave us some wide-open looks we just aren’t making them. I don’t know how to explain it any more than that.”