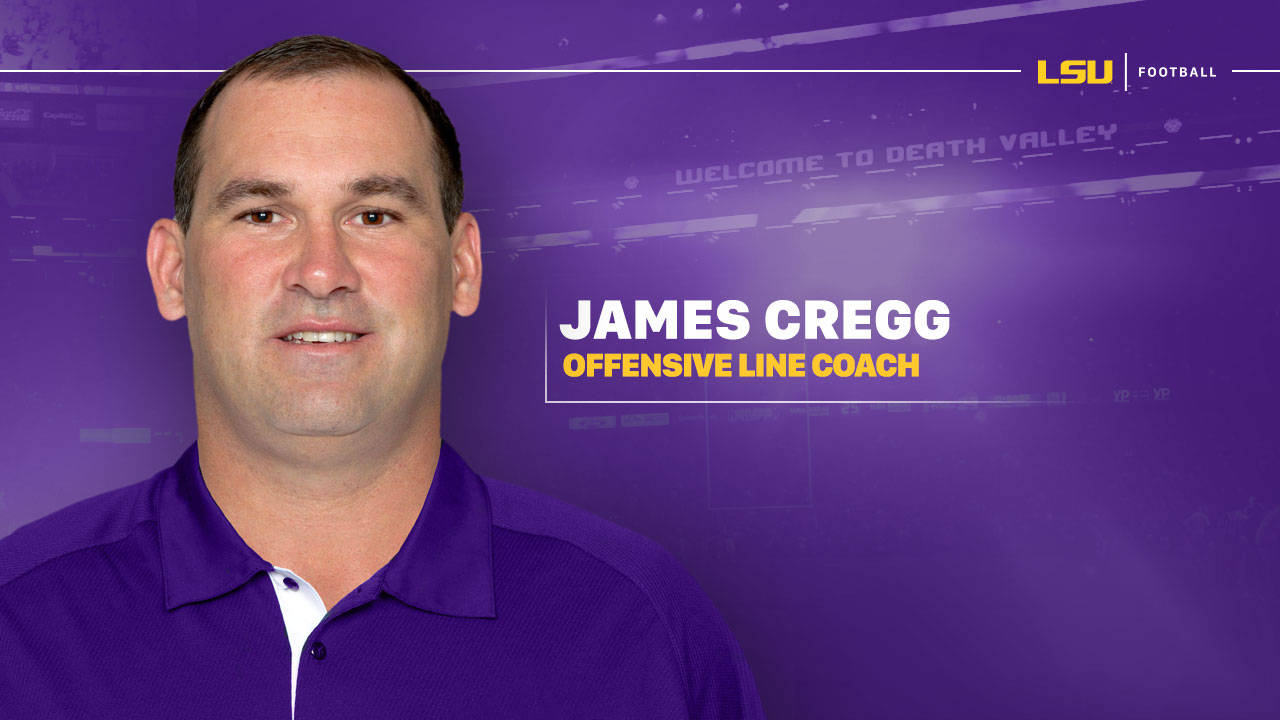 Cregg will join the Tigers at the completion of the NFL season, where he is currently serving as the assistant offensive line coach for the Los Angeles Chargers. Cregg coaches former LSU lineman Joe Barksdale, who is the starting right tackle for the Chargers.

“James is a great addition to our staff,” Orgeron said. “I worked with Coach Cregg at both Tennessee and Southern Cal so I know firsthand the type coach he is and how he serves as a mentor to his players. He’s an outstanding recruiter that is going to develop our players both on and off the field. He will be a tremendous person to have in our program.”

Cregg has six years of NFL coaching experience to go along with 15 years at the collegiate level. Cregg coached with Orgeron at Tennessee in 2009 and they served on the same staff a Southern Cal for four years from 2010-13.

Prior to joining the Chargers for the 2017 season, Cregg spent three years coaching the offensive line for the Broncos, where he helped Denver win Super Bowl 50 with a 24-10 victory over Carolina.

A native of Syracuse, N.Y., Cregg prepped at Norco (Calif.) High School before spending four years (1992-95) as an offensive lineman at Colorado State University. He was a first-team All-Western Athletic Conference selection as a senior in 1995.

In 1994, Cregg helped Colorado State to the first 10-win season in school history as the Rams posted a 10-2 mark and played in the Holiday Bowl. As a senior, Cregg and the Rams went 8-4 overall and advanced to the Holiday Bowl for a second-straight year.

Cregg remained at Colorado State and landed his first coaching job as a defensive graduate assistant from 1997-99. After three seasons at his alma mater, Cregg moved on to Colgate (2000-03) and Idaho (2004-06), coaching the defensive line at both stops.

At Colgate, Cregg was part of a staff that led the Raiders to the 2003 NCAA Division I-AA championship game. Colgate won 21-straight games during his time on the coaching staff. In four years at Colgate, claimed two Patriot League titles and finished in the top 10 in the nation in rushing defense twice.

In 2007, Cregg landed his first NFL job as an assistant offensive line coach with the Oakland Raiders (2007-08). In 2009, he was hired to coach the offensive line at the University of Tennessee. That season, the Volunteers allowed just 12 sacks, tied for fewest on the Southeastern Conference.

Cregg spent one season in Knoxville before moving to California to become the offensive line coach at USC for the next four seasons (2010-13). Cregg coached first-team All-Pac-12 selections in each of his four years with the school, including offensive tackles and future NFL first-round picks Tyron Smith (No. 9, Dallas, 2011) and Matt Kalil (No. 4, Minnesota, 2012).

In 2011, USC finished second in the nation in sacks allowed (eight) despite not starting a senior along the offensive line. Kalil was named first-team All-America, while guard Marcus Martin was chosen as a first-team Freshman All-America.

Cregg received his bachelor’s degree in social science from Colorado State in 1997. He was born Aug. 18, 1973, and he and his wife, Dayna, have a daughter, McKenzie.