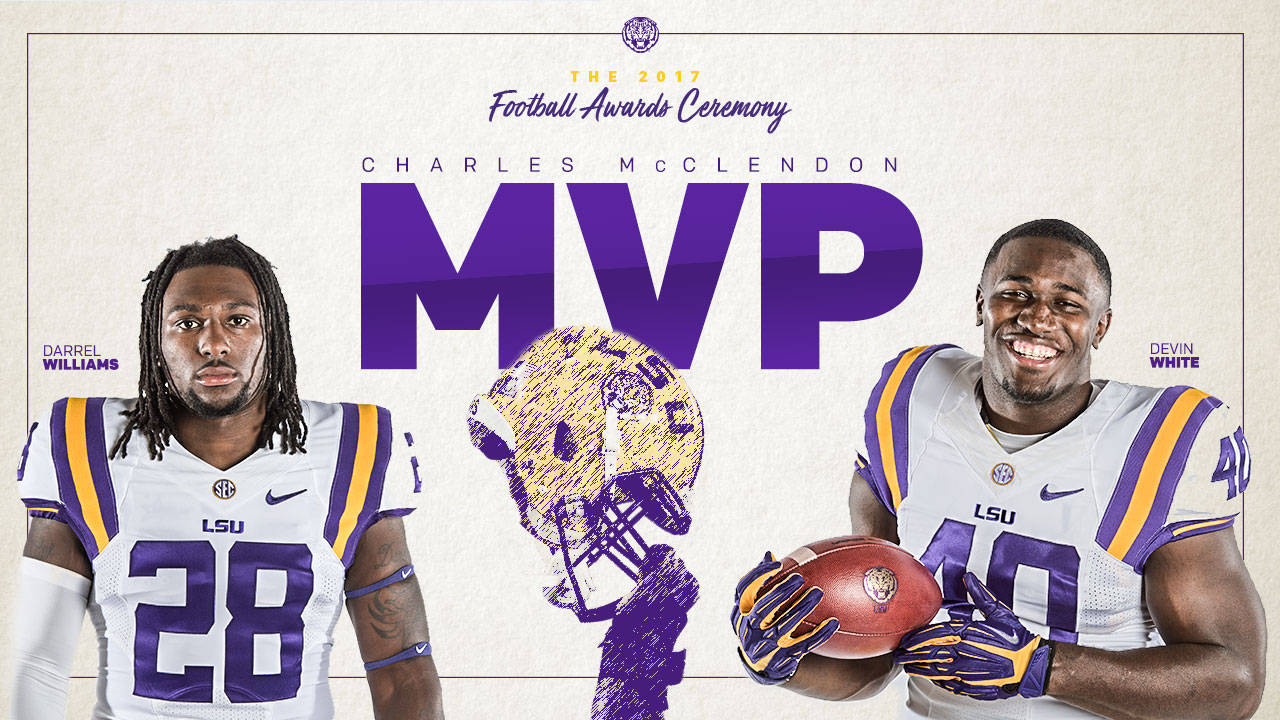 BATON ROUGE – Running back Darrel Williams and linebacker Devin White headlined the list of award winners for the 2017 LSU football team as they were named the recipients of the Charles McClendon Award as LSU’s most valuable players here Monday night as the Tigers held their annual awards ceremony at Union Theatre on the LSU campus.

Williams and White were both first-time recipients of the honor. White, a first team All-Southeastern Conference selection and a second team All-America, led the SEC in tackles with 127. He was named the SEC Defensive Player of the Week a league record four times in 2017.

Williams finished second on the team with 776 rushing yards and nine TDs. He added 22 receptions for 327 yards. Against Ole Miss, Williams became the first player in LSU history to have 100 yards rushing and receiving in the same game.

The 2017 Percy E. Roberts Outstanding Offensive Player Award was shared by running back Derrius Guice and wide receiver DJ Chark. Guice led the Tigers in rushing with 1,153 yards and 11 TDs, while Chark paced the team in receptions (35) and receiving yards (811).

The 2017 Percy E. Roberts Outstanding Defensive Player Award was presented to White and cornerback Greedy Williams. White was the leader of an LSU defense that ranked among the SEC best in points allowed (18.8), total defense (311.7) and rushing defense (126.4).

Williams, a redshirt freshman, led the SEC in interceptions with five and earned first team all-conference honors as well as being a third team All-America selection. Williams added 34 tackles and 10 pass breakups.

The Charles E. Coates Academic Award was given to tight end John David Moore and quarterback Danny Etling. Moore was recently named a first team academic All-America, while Etling was named the SEC Scholar-Athlete of the Year for football. Moore has a 4.0 grade point average in architecture, while Etling graduated with a 3.7 grade point average in mass communications last May.

The following is a complete list of LSU’s 2017 award winners:

Alvin Roy Award
Give to the player(s) who has shown the most dedication to the individual and team goals of the Tiger’s year-round strength and conditioning program.
2017 Recipients: John David Moore, Breiden Fehoko

Dr. Charles E. Coates, Academic Award
Presented to the senior who has demonstrated the highest commitment to scholarly work in the combination with excellence on the field.
2017 Recipient: John David Moore and Danny Etling

Wild Tiger Special Team Award
Presented to the player who accumulates the most points over the season through his effectiveness on special teams plays.
2017 Recipient: Russell Gage and DJ Chark

Jeff Boss Unsung Hero Award
Presented by the Bengal Belles goes to player who have made significant contributions to the success of the team and received the least recognition for it.
2017 Recipients: Ed Ingram, Greg Gilmore, John Battle, Garrett Brumfield Saahdiq Charles

George M. Wallace Memorial Award
Presented to the defensive player who has distinguished himself by performance, leadership and commitment to team.
2017 Recipient: Rashard Lawrence, Christian LaCouture