Men's Basketball Falls at the Buzzer Against SFA, 83-82 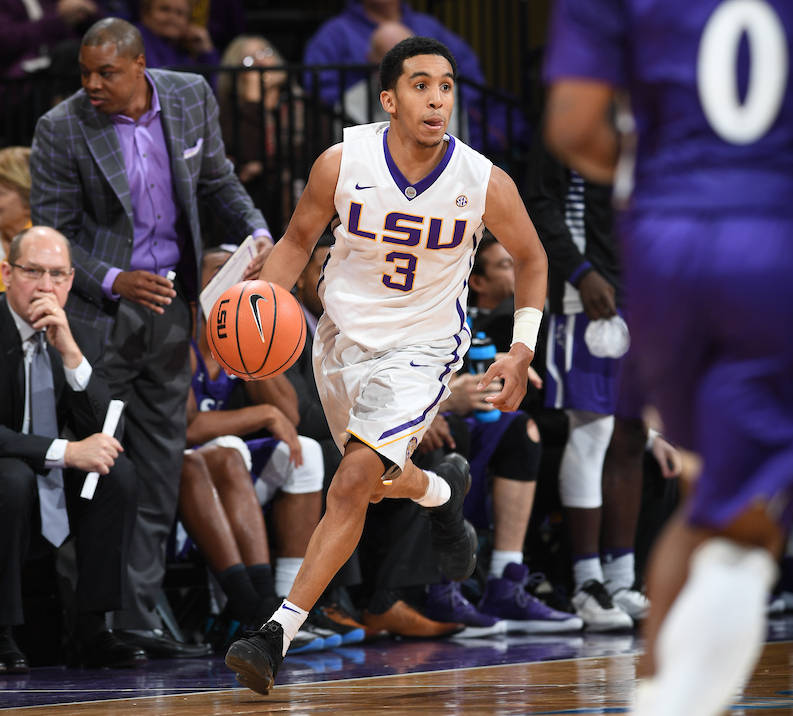 BATON ROUGE – A wild final 61 seconds resulted in a winning bucket with five seconds left to be followed by a missed layup by LSU with just over one second to play that resulted in a Stephen F. Austin 83-82 upset win over LSU Saturday at the Pete Maravich Assembly Center.

The Tigers fall for the third time this year and go to 6-3 while Stephen F. Austin is now 10-1 on the year. LSU hosts Sam Houston State on Tuesday night at 7 p.m.

LSU was unable to sustain a nine-point first half lead and a seven-point lead with 14:47 to play in the contest in a game that had 15 ties and 18 lead changes.

And although many things put the game where it was in the final 61 seconds, it was a finish that had people standing and living on every play that was made.

Tremont Waters hit two free throws to tie the game and give LSU a 79-78 lead. After an LSU timeout, Ty Charles missed a jumper for SFA but Shannon Bogues got the offensive rebounds and Ivan Canete hit a three with 31 seconds left to give the Lumberjacks an 81-79 advantage.

LSU came down and Waters kept the ball in his hands and drained his own three-pointer with 18.8 left to give LSU an 82-81 advantage. Waters almost made a steal at midcourt, but in the scramble Aaron Augustin found Canete under the basket for a layup with 5.9 left to five SFA an 83-82 advantage.

The Tigers quickly moved up the court and Waters went to Epps with a bullet pass under the goal that Epps grabbed and put on the board but it rolled away with 1.3 left, sending the Tigers home on the losing side.

Canete hit four treys and led SFA with 20 points and had four assists. Kevon Harris had 11 points and Shannon Bogues 10.

SFA opened up its biggest lead of the half at five with 16:50 to go in the first half, 10-5, but LSU was able to get back in the game and with the game tied at 27-27, LSU began to put distance in the score as Mays and Epps hit layups, Mays hit two free throws and then assisted on a bucket by Wayde Sims. An ensuing free throw made it 36-27 LSU with 5:59 to play in the half.

LSU would score the first seven points of the half to take the six point advantage, 54-58, with 17:38 to go, but by the 10:31 mark, the game would be tied for the ninth time at 63-63 and neither team was able to get more than a three-point lead the rest of the way.

Opening statement …
“It was certainly a disappointing result. We got what we deserved. They played harder than us from the start. They were tougher than us. It was basically the exact opposite of what happened on Wednesday night between us and Houston. We got beat because we weren’t tough enough. At the end of the day, that’s what happens. We turned the ball over 17 times, and they out-rebounded us. They were just more physical than us. They finished a little bit better around the rim than we did. That ultimately got us.”

On the final plays …
“I mean you (can’t) get a better look. We got a layup. You get a better look a lot of times when the defense is scrambling than if you call something. We got as good of a look as you can get. We lost the game well before the last play. That last play was… We didn’t deserve for that layup to go in. I know (Aaron) Epps wishes it would have gone in. I know our team did too, but the way we played and with how tough they were—they were down nine in the first half and six in the second half and came back—we didn’t deserve that.”

On calling a timeout within the first 30 seconds of the game …
“This is the second time we’ve done this (Notre Dame game after Michigan win). This is the same thing. Two steps forward, one step back. We called the timeout because we couldn’t get the ball in bounds, but I could sense that today was going to be a meat grinder so to speak.”
—

On the last sequence of plays …
“I think Tre (Tremont Waters) denied the ball really well. They were trying to get the ball back to (Aaron) Augustin and it looked to me that he got the ball so I was heading down the wrong way. I lost sight of my man and Augustin was able to get the loose ball and had (Ivan) Canete down in there wide open and we gave up the layup.”

On Tremont Waters passing the ball instead of trying to score …
“I felt like he made the right play. I definitely have to finish that.”

On how Stephen F. Austin compares to other teams they played this year …
“They are really good. They played tough for the whole game. That is basically why they won. They out toughed us.”

On the first few minutes of the game …
“We didn’t come out with the right attitude. We were just kind of out there. We were not as focused as we should have been.”

On the emotions of the team after the game …
“Coach just said that we lost the game three minutes into the game. You could see that we were lacking on, not so much defense, but overall effort. After that layup rimmed out, I kind of looked back on those last five seconds of the game and I don’t think that was Epps’ fault. That was definitely my fault as a key guy that Coach looks to. I feel like I should have driven in. If we lost it should be on me not Epps. I take the burden off of him and take that on my shoulders.”

On if he felt like he had time to drive to the rim on the last play …
“Most definitely. I think the clock was stopped at 5.3 seconds when I caught the ball. Brandon Rachal inbounded it. I got to half court in about two seconds. From half court to the baseline, I can get there in about one and a half seconds so I knew I had enough time.”
—

Opening statement…
“I thought it was a really nice college basketball game. I thought it was pretty fast paced. We’ve been off a week. Will’s (Wade) team had to play Wednesday. We had an advantage as far as that goes. We made one more play than they did at the end.”

On how he feels they played tonight…
“I thought we played really well offensively. I think Coach Wade made some great adjustments. I thought he made our defense look terrible. I thought they were great offensively. I give them all the credit in the world, but I think our kids made some really good adjustments. I thought our kids, in the second half, played better defensively and made some plays at the end. I’m not discrediting our guys at all, but I thought we showed some fight and some resolve. My seniors (Ty) Charles, (Leon) Gilmore and (Ivan) Canete made some big plays at different times and that’s what we have to have.”

On if there were any changes in the game plan going into the second half…
“For sure. We backed up our pick-up point as far as with our pressure. We could do nothing to disrupt them at all and that’s what we do. (LSU’s Tremont) Waters controlled the whole game. I thought he was the best player on the floor all night long. Even if he didn’t score, he controlled the whole game. We couldn’t do anything to stop him and he didn’t have to shoot the ball at all. He dominated the game as far as I’m concerned. We just happened to make a couple plays. We’re just really fortunate. God bless this game, we’re pretty lucky.”