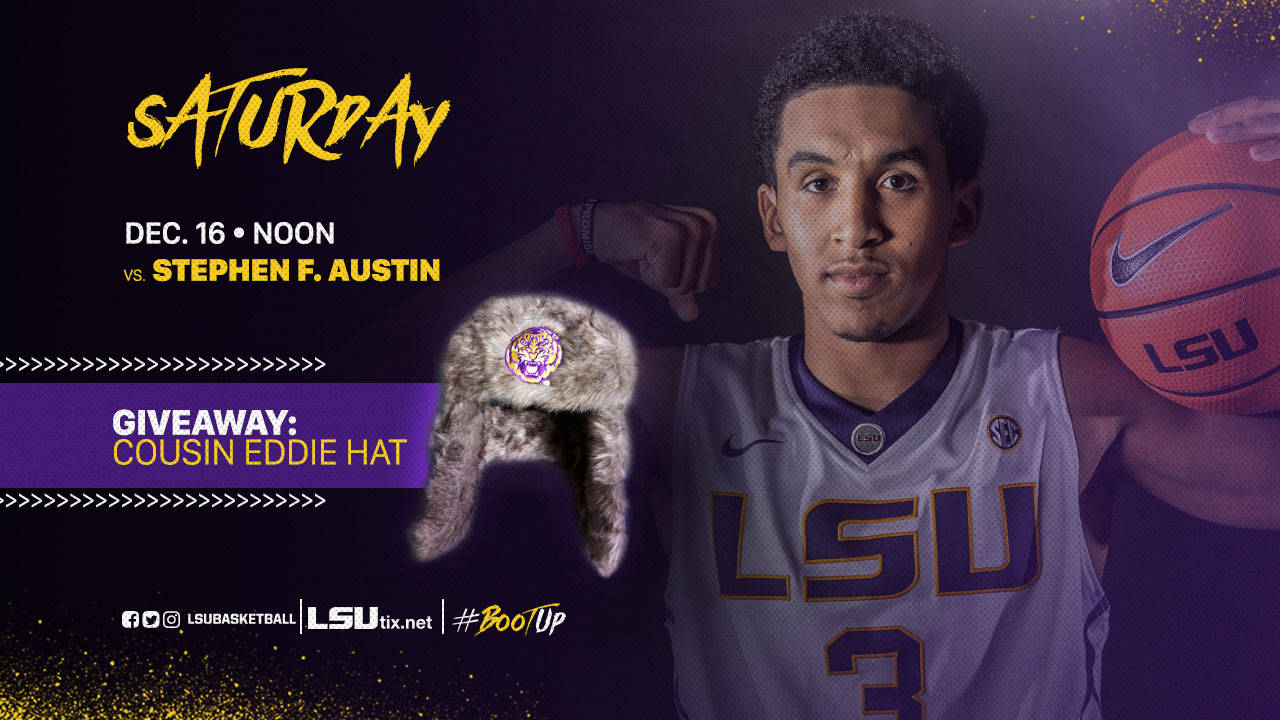 BATON ROUGE – It will be an early start Saturday for the LSU men’s basketball team and they need to be ready to go at noon when one-loss Stephen F. Austin comes to the Pete Maravich Assembly Center.

Tickets for the Tigers and the Lumberjacks are available at www.LSUtix.net until 10:30 a.m. when the upper concourse ticket windows open at the Maravich Center. Tickets are free for LSU students with a valid ID.

PROMOTIONS
This is the third game of the “Christmas Wadecation” games and the first 2,000 fans will receive an LSU-branded “Cousin Eddie” hats.

TV, RADIO
The game is the first of four games Saturday on the over-the-air SEC Network with Matt Stewart and Sean Farnham on the broadcast. Chris Blair and John Brady will have the call on the LSU Sports Radio Network.

LSU NOTES
The Tigers are coming in off the exciting 80-77 win over Houston on Wednesday night as senior forward Aaron Epps posted 26 points and 16 rebounds, the fourth career double double for Epps and career high in both categories. Skylar Mays had 18 points and Tremont Waters 17 pts, six assists and a key block of a potential tying three-pointer with six seconds to play.

The Tigers have posted a 55.2 percent shooting percentage in the five home games so far this year and that is the third best percentage by an LSU team since the 1974-75 season. For the season, LSU is shooting 52.6 percent, best in the SEC. Last year, LSU shot 45.1 from the field. At the line, LSU is 78.2 percent (129-165) and that is also first in the league and much better than last year’s final total of 69.6 percent.

Expect Coach Will Wade to keep the same lineup of the present three game winning streak with Mays, Waters and grad student Randy Onwuasor at guards with Epps and Epps and sophomore Wayde Sims at forward. Waters is averaging 18.1 points, 6.5 assists, while Mays is at 12.9 points, 4.1 rebounds.

SFA NOTES
The Lumberjacks have been to the NCAA Tournament four of the last five years and SFA leads the nation in steals per game at 13.2 a game … Since 2011-12, they have the second most true road wins in the nation with 56.

SFA won its last game on Dec. 9 over Rice, 81-62 as sophomore Kevon Harris scored 31 points. He also made eight three pointers as part of the outburst. Junior Shannon Bogues in his first SFA start, added 18 points.

NEXT UP
The Tigers runs of games continues on Tuesday night as another Southland Conference team, Sam Houston, comes to Baton Rouge for a 7 p.m. game.