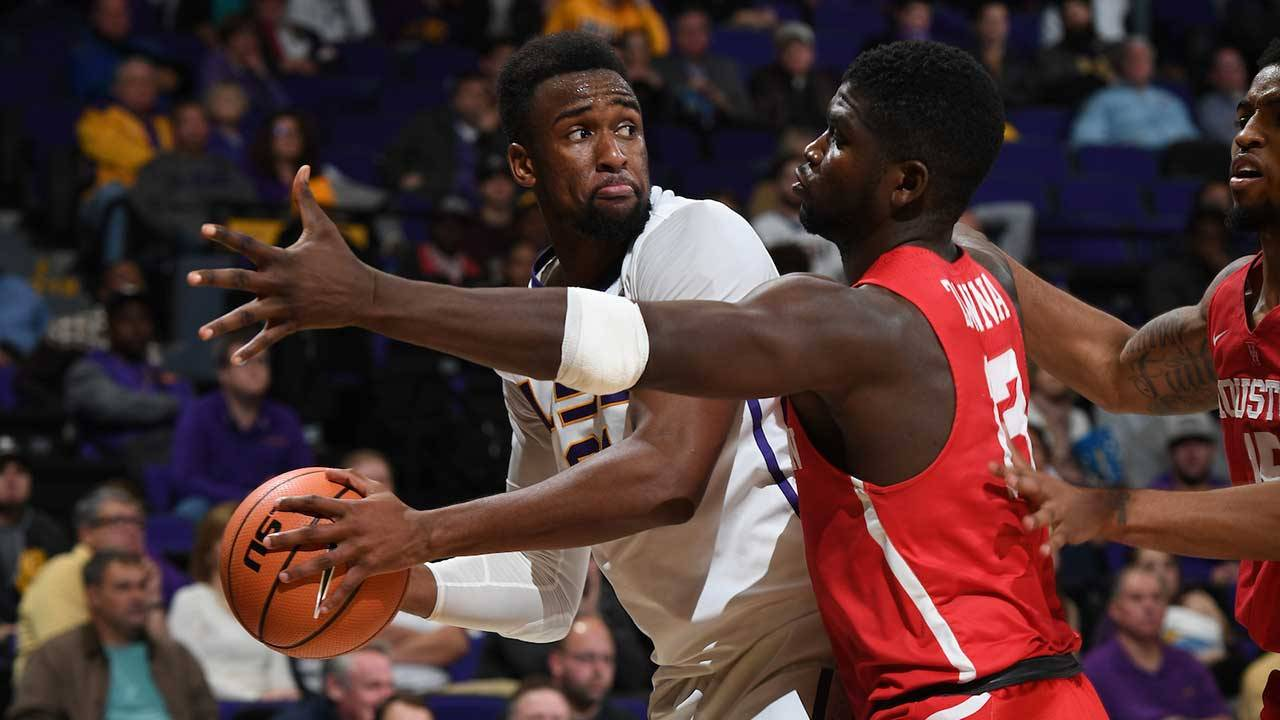 BATON ROUGE – The LSU Tigers rode the career high double double of senior Aaron Epps and then watched star Tremont Waters make up for a turnover moments before with a block of a potential game-tying three-pointer in the final six seconds as LSU remained undefeated at home under Coach Will Wade with an 80-77 decision over Houston.

The Cougars, receiving votes in both polls, fell to 8-2 on the year and LSU became the first team to out rebound Houston this year, 38-33.

LSU is now 6-2 and survived the first of two one-loss teams this season. Saturday at noon, the Tigers will host Stephen F. Austin, 9-1 on the year having gone to four-of-the-last-five NCAA Tournaments.

Epps posted 26 points and 16 rebounds for his fourth career double double. He had eight offensive and eight defensive boards. He hit 8-of-12 field goals, including 2-of-4 three-pointers and an impressive 8-of-9 from the free throw line in 29 minutes.

Skylar Mays added 18 points with nine boards, one short of his first career double double and Waters finished with 17 points and six assists.

It was a game in which LSU got off to a great start and then played solid in the final minutes to record a win equally as big as rallying win over Michigan in Maui.

The Tigers opened the game with a designed play to get Epps a three-point shot from the corner and he buried it, exciting him and getting him rolling on his big night. With the game tied at 5-5, the Tigers ran off 11 straight points with Waters hitting a three, Epps getting a dunk, Mays a layup, Epps a layup and Waters a bucket to make it 16-5 with just 4:10 gone in the game.

Houston wasn’t about to go away, rallying to build a four-point, 32-28 lead at the 8:10 mark of the first half as both teams struggled to score in the final six minutes of the half with LSU down one, 38-37, at intermission.

The Hogs would build another four points lead at 49-45, four minutes into the second half before LSU would take control again, swinging the advantage back out as much as six at the 12:29 mark on a Mays bucket.

The teams traded some buckets and free throws until Rob Gray hit a trey with 49 seconds left that cut LSU’s lead to 80-77. The Tigers ensuing possession did not go well as Waters turned the ball over on a travel with 24 seconds left.

But Waters came back on the defensive end with a block of a miss three pointer by Corey Davis and then Devin Davis missed a desperation three at the buzzer igniting a celebration on the floor of the Maravich Center.

Again LSU had a good night in the paint with 38 points and a 19-7 advantage of second chance points in a game where the lead changed 14 times.

OH MY GOSH! The freshman @Tremonth2o with the BLOCK to take down Houston. #BootUp pic.twitter.com/ghGDtK2sAc

QUOTES
LSU Coach Will Wade
Opening statement …
“I’m really, really proud of our guys. I thought we won the game on toughness. We out-toughed them. We were really gritty down the stretch. (Houston is) one of the toughest teams in the country. That offensive rebound, and-one by (Aaron) Epps was a huge play. (Wayde) Sims had a big loose ball recovery. It was just a total team effort. Obviously, Epps led the way, but it was a total team effort. Our guys picked it up. I thought Daryl Edwards played a phenomenal game defensively on (Rob) Gray. He just did a tremendous job. To be the first team to out-rebound them all year, it shows our guys were locked in, tough and ready to play. We didn’t turn the ball over. I am really, really pleased with our effort. We beat a very, very good team. It was a great team win. Skylar (Mays) to have nine defensive rebounds, Epps 16 rebounds, it was just a really good team win. I’m proud of our players.”

On preparation to play Houston …
“I wasn’t really pleased with how practice ended (Tuesday). When you play a tough, physical team like (Houston), you have to practice tough and physical. We got up a little early this morning since we had a long day (yesterday). We taped up and went good on good for about an hour, an hour and 15 minutes. We came back and did our normal shoot around this afternoon. We went twice today. I tell our guys preparation breeds confidence. Confidence builds toughness. We have to prepare the right way so that we are confident. When we are confident, we will just fly around and play tough. I felt that’s what our team needed. That’s what we did. I think we played a little tougher because we had that mindset.”
—

On the momentum the team gets from a win like this …
“That’s the games you want to play and the games you prepare for. Winning games like that, that happens in the summer. We had a great summer and we are prepared for games like this. We are excited with our work and showing up.”

On getting the rebound advantage tonight …
“(Aaron) Epps has always been an animal on the glass. It was his night. He just performed really well, got timely scores as well. As for me, their guards were crashing the glass. So I just myself in my position to help Epps and Duop (Reath) out.”

F Aaron Epps
On him, Tremont, and Skylar taking over the game …
“We were just playing. Playing extra hard, making extra passes. Hustling.”

On the most difficult position to crash the boards from …
“Defensively. That was definitely the hardest side because all of their guys were crashing hard so I just had to fight basically.”

On the plan defensively tonight …
“Just to keep on fighting. Make sure we crash the glass hard and just make sure we got our hands up on every shot.”

G Tremont Waters
On the final few moments of the game …
“I had just turned the ball over which was a heart-crushing moment and I had to brush it off. Coach was just saying to get back and I knew I had to make up for it. About 10 seconds left on the clock. I knew that when he (Houston’s Corey Davis, Jr.) caught the ball he was going to shoot it. That was all he did all game. I had a tough time guarding him. The last play he caught it and I knew he would shoot it so I knew I just had to contest the shot and I blocked it.”

On Aaron Epps performance tonight …
“That man is a GOAT. Epps is going to the league. It was a great game. He started off the game with an opening three and at that point I knew he was going to have a good game. He didn’t hesitate. He shot the ball and played his game the whole game.”
—

HOUSTON HEAD COACH KELVIN SAMPSON
On how they played…
Either team could win that game. Came down to making a shot here or there. We had some wide-open looks from three. But we missed them in the last five minutes. I’m not talking about the one that got blocked. I’m talking about the ones that were open. They had the same looks. I think Waters hit a tough one and I think that put them up six. And then we came right back and scrapped and got it down to one. There was a loose ball underneath the basket. If we get that ball we probably have a chance to tie it up or take the lead with under a minute to go. That was a big play. We were on the road. We obviously did not play, as we liked to play, but still had the chance to play. I’m disappointed that we lost, but not disappointed in our effort.”

On team improvement …
“… but I still think my team will continue to get better. I don’t lose sight that we have eight new players on this team. We are still integrating a lot of things. Fabian White is a true freshman. Maybe a couple weeks from now he plays a bit better than he did tonight. I think Corey (Davis, Jr.) shot the ball well. I think Rob (Gray) was not as efficient as he has been. Rob scores 20 points but he takes 16 shots. That is not very efficient. Whereas Corey scores 20 points and only has 10 shot attempts. That is being efficient. We are going to continue to work to get better. We had a great win at home against Arkansas. We go on the road and have a big win against St. Louis and we lose one at the buzzer here today. We will go back and lick our wounds a little bit, and get ready for the next one.”