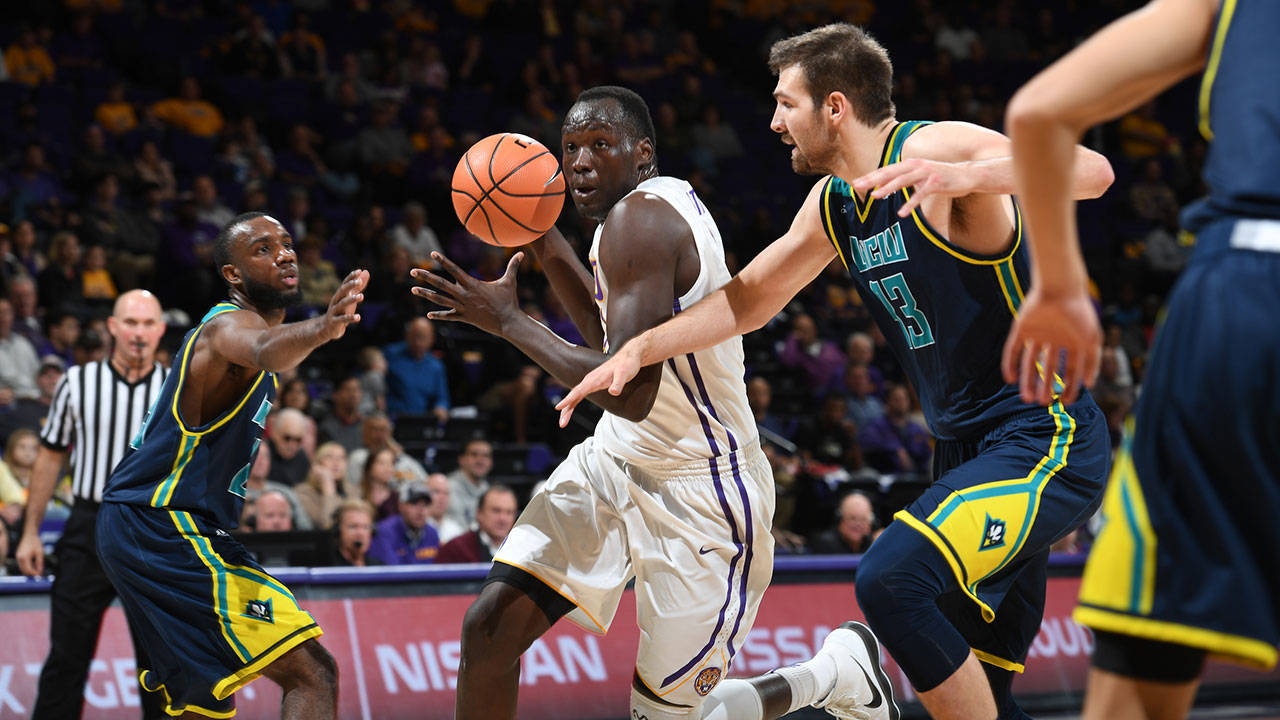 .BATON ROUGE – LSU got a career high 30 points from senior forward Duop Reath and scored 48 points in the paint in a 97-84 win over UNCW Sunday afternoon at the Pete Maravich Assembly Center.

The Tigers have a record of 5-2 while UNCW drops to 2-5. LSU has a game set for Wednesday night against Houston at 8 p.m. in the Maravich Center. Tickets are available at LSUtix.net.

Both the points in the paint and the shooting percentage was helped by Reath who was 13-of-17 from the field for the game in collecting his 30 points. For Reath, it was a second straight game of coming off the bench, but playing solid offense in recording 27 minutes

For Reath, the 30 points topped the 23 he had on two occasions last season and his 13 field goals made topped his previous career high of 10.

Getting the ball to the senior from Australia was freshman point guard Tremont Waters who was one rebound away from a triple-double with 20 points, 10 assists and nine rebounds. Waters made 6-of-13 field goals, including a trey and 7-of-8 free throws.

UNCW played without two starters in the first half including Devontae Cacock, who was averaging a double double and last year led the nation in field goal percentage. He played 17 points in the second half and scored 10 points.

Jordon Talley led UNCW with 22 points, seven assists and no turnovers in 31 minutes, while Jacquel Richmond had 16 points, Ty Taylor had 15 points and Jeffrey Gray 10.

The Tigers scored the first five points of the game on a three-pointer by Sims and a steal and dunk by Mays and LSU never trailed in the contest and moved to its first double figure lead at 38-28, with 3:26 to go in the opening half on a three-pointer by Brandon Rachal. LSU would lead, 52-36, at intermission.

With more of their lineup intact in the second half, the Seahawks did cut the LSU lead down to seven, 66-59, with 10:47 to play, but LSU moved the lead out to as much as 18 twice in the final five minutes.

Opening Statement …
“I thought it was a good. Funky things can happen coming out of exams so I thought our guys handled business. I thought Daryl Edwards changed the game in the second half when he came in. Not only offensively, that four-point play was huge, but he made a cross-court pass the next possession to Skylar (Mays) for an open three. He also did a good job guarding (Jordan) Talley during that time. I’m really proud of Daryl. We wanted to establish Duop (Reath) inside early on. We knew we were going to get some one-on-one coverage down there. Duop did a good job of keeping balance and being able to score the ball. All in all, we’ll take it. Good win, but we’re going to have to play a lot better on Wednesday when we play Houston. They’ll be the best team we’ve played since Notre Dame.”

On tonight’s defensive effort…
“We were better today defensively. They (UNCW) hit some tough shots. They’re a really good offensive team. Our guys stuck to the game plan. You’re going to have to give up something. They hit some threes when we went underneath on some screens. They’re a good offensive team. I’m more concerned that our turnover numbers are too high. That’s starting to become a trend for us on offense. We shot 59 percent from the field, and if we can just get more shots on the basket, that’ll certainly help. We’ve made a habit of letting some secondary guys go off.”

On Devontae Cacok not starting for UNCW…
“We were going to try to go inside and get him in foul trouble. He had four fouls in the second half. We wanted to go inside and get him in foul trouble. I don’t think it changed drastically. Obviously, he’s a good, physical player down there. It changed a little bit in the sense that they played smaller than they typically do. They didn’t play the two bigs down there like they usually do. We game planned for the two bigs. We played our smaller lineup a little more than we thought we might have to.”

On Duop Reath‘s getting a lot of touches…
“I thought he responded well to that. He shot 13-for-17 so we’ll take that. He’s been working on those trail threes. (Wade) Sims has worked so hard on his threes the last 10 days. I though he got great looks. He stuck that first one then he had two or three go in and out. His is coming too. We shot 42 percent from three. We took better threes tonight.”
—

On his performance tonight …
“I feel like we got a lot of stops in the first half. In the second half we didn’t get as many as we wanted to. We didn’t reach our 40 deflection goal. That showed that we didn’t play as hard as we could have. As far as the game, we came out, scored the ball, and got some stops in the first half. In the second half they played (Devontae) Cacok, the big man. Pretty much did the same thing but we let the ball go over the top a lot of times. It was just a rough game defensively.”

On how Coach Wade felt about the defense at the half …
“He was definitely confident. He told us that we just had to keep it up because he said that he saw a lot of improvement at halftime. He felt like we played harder in the first half and in the second half, it’s like I said we didn’t play hard for 40 minutes.”

On dominating the paint in the first half …
“That was part of our game plan because the way they defend the post is a little bit softer. They don’t really dig on our front post.”

On the second half defensive issues …
“Focus. Just staying focused for all 40 minutes. We have lapses where we lack focus.”
—

UNCW Coach C. B. McGrath
Opening Statement …
“We did a nice job early in the game and they hadn’t got into a rhythm yet. It was a five or six point ballgame and we got a little tired. Some guys started to sit out and they went on an eight-point run. We did some good things to get back into the game and we had some unforced turnovers. We didn’t get some shots that we should have, we didn’t get the stops we needed, and some silly fouls that turned into three point plays. That really swung the momentum the other way.”

On the struggle of controlling boards with players sitting out …
“They violated team rules. The whole game they controlled the boards. It’s something that I couldn’t control; it’s something that I had to do. I told everybody, ‘UNCW has five guys out there and LSU has five guys out there and it was more about boxing out.’ I told them before the game that they needed to go find a guy and box out and don’t worry about the rebound. They go after the ball, they’re going to try and rebound, so if we just think we are going to go up and rebound the ball, they’re going to get it. They got a few of those early, but we did a better job later and we got some offensive boards. We knew points in the paint and offensive rebounds were going to be huge in the game and we had to try and cut down points in the paint, which we didn’t. They attacked us inside and we didn’t get enough rebounds.”